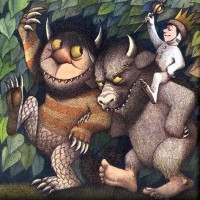 Man oh man, has Finn’s imagination taken flight upon reading Where The Wild Things Are by Maurice Sendak (“Beast Book!”). Today he decided that he wanted to wear a crown just like Max’s “Beast King” crown in the book. He remembered that he had the blue fuzzy crown from his first birthday, and was very specifically asking me to look for it so he could wear it. I found it, and he proceeded to wear the “Beast Crown” all morning, including our outing to “big playgroup”. He wore it until I suggested he take it off for nap time. It was kinda fun explaining the crown to the other moms.

Later this afternoon, he donned the crown again and decided to set sail on the ottoman and climbed aboard: “This is the boat! Sailing to the island! Island over there! (pointing at the kitchen) Have a rumpus!”

When he arrived at the rumpus, I asked him if he was going to swing from the trees like Max does in the book. He walked to the baby gate on the kitchen doorway and started grabbing onto the bars: “This is the tree! Swinging! Bursting!”  When he later heard me telling Dad-O about it, he said, “Mom-O opened the tree!” (Mom-O needed to get to the kitchen to get the Beast King some dinner.)