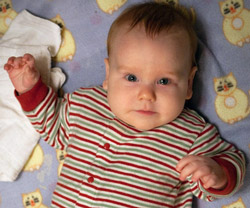 Mr. Henry Seamus Nack turned six months old today. We can hardly believe it! Time has flown since he’s arrived on the scene. He’s gotten so big, and just lately he is so much more animated and alert than even a month ago. We love his giggles, his mischievous little grin and sparkling eyes, and his wonderful talent at sleeping through the night. He has started making a lot of sounds, prompting his big bro to say “What’s Goonie talkin’ about? Crazy baby!”

We go in for his official check-up with Dr. S. on Monday, so we’ll post his stats then. He’s growing like a weed, and is a big fan of his rice cereal. He cannot keep his hands off the spoon when it nears his mouth. And boy does he have a strong grip! If he’s this excited about cereal, I can only imagine his enthusiastic reaction to other, far tastier foods in the near future. So Happy Half-Year, Henry! And we’ll lift a teensy baby-spoon to the next six months!