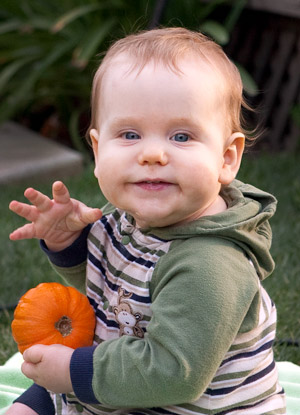 Today Henry turns 9 months old. Wowee, how time flies! Little Mr. H. has been working on lots of milestones lately. Two new teeth emerged last week after a long, painful, whiny stint of teething, bringing his tooth-count to 8 (ocho!)! He’s also been rolling from back to front (finally!) and back again. I honestly thought he’d never master the back-to-front roll, since he seemed so content to stay on his back once he’d rolled off his tum.

He’s started migrating around the crib during the night, has graduated from baby food to table food, and is learning how to transition from sitting to lying on his tummy. He’s not too happy once he’s stuck lying on the ground, but he does enjoy the process of leeeeeeaning forward until he can stretch himself completely out. Henry seems to really dig standing up in his excersaucer, which we’ve dubbed his “disco” thanks to its music-themed doodads and the music that it emits.

All in all, he’s a happy little guy with an adorable, puckish grin, which usually emerges as he’s watching his big bro’s antics in the tub or at the dinner table. The two brothers really seem to get a kick out of one another these days.