I know, I know: Soon enough, the lads will be really independent, to the point of wanting nothing to do with their lame parents. In the meantime, though, boy can they be clingy. Now when either of us (but particularly Dad-O) leaves the room, the dudes start wigging out a bit. If I even go around the corner for a moment, Finn starts asking “Where is Dad-O? Dad-O, where are you??”–while Henry starts yowling. This pair of photos puts the experience into a nutshell. First, here we have Henry: 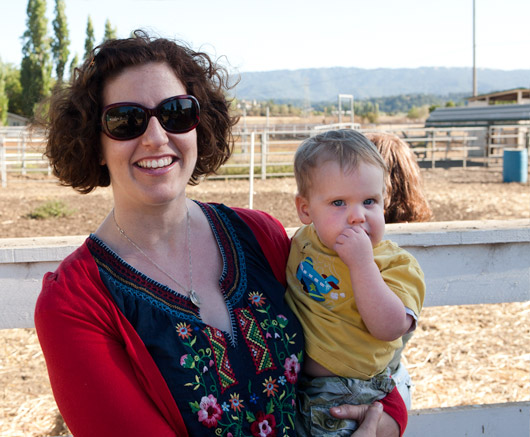 Aaaand, here we are a moment later: 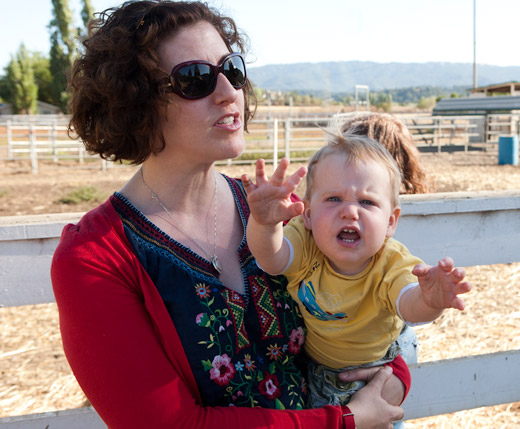 A somewhat encouraging little postscript, though: I took the guys out to eat at Aqui last night as Mom-O was out of town, and they actually stayed put (without fussing!) as I had to disappear around the corner a couple of times to grab our food, utensils, etc. Not bad in a crowded, noisy restaurant! 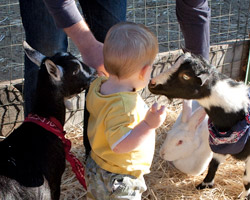 Finn popped up from his nap on Saturday saying, “Let’s! Go! See! Those! Ponies!!” And so we did, heading down to Gilroy (south of SJ) to meet up with a whole herd of playgroup pals & their parents. We joked about meeting up with “Dr. Ponyowner” and getting to ride his ponies. We grabbed a picnic lunch (Finn’s *way* into cornbread–who knew?), and short order our big cowpoke was astride pony Tux, circling the corral. Afterwards we introduced “little billy goat” Henry to some actual billy goats, plus at 25lb. “Flemish Giant” bunny. Here’s our little gallery (HTML) plus a short vid:

Our little G-Man is so eager to talk & walk, and he’s getting closer on each front. Lately we’ve taken to roughhousing in Finn’s big-guy bed, a process Henry requests by saying, “Turtle, turtle!” in reference to the animal blanket on the wall. He’ll often start whispering it while in another room, then get louder and louder as he beelines to Finn’s room. Now the two guys tend to get their turtling on while the bath water runs (getting stripped down) and just after toweling off (reversing the process). Check out a recent occurrence. [Update: If you have trouble seeing the video below, please let me know and check out the vid on YouTube.]

(Oh, and in case you’re wondering, Finn being named “Edna” is connected to our reading A Penguin Story.) 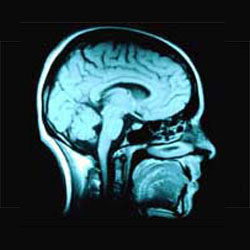 Hmm… it’s getting harder to pull the wool over Finn’s eyes. Last night he was poking at a little plastic locomotive he’d dug out of his closet–one that I predicted (correctly, it turns out) would make a horrible racket if armed with batteries. He’s been asking about the train for a few days (“Check out the little speaker, Dad-O! How does it work?”), and last night I tried to give him more run-around:

The Naxx micro and macro took a little field trip on Sunday to a fantastic park we’ve heard about from several sets of friends: Dennis The Menace Park in Monterey. Twins Bettie & Quade had a great time visiting with their folks recently, and Finn’s buddy Hoot grew up going to that park.

Suffice it to say, we all had a great time. I don’t think I’ve ever been to a park this terrific! There’s a huge, real steam locomotive (decommissioned, much to Engineer Finny’s dismay) for kids to climb all over, a hedge maze, an incredibly long “rolly slide”, a wobbly suspension bridge, and all sorts of other things. We will certainly have to come back since we only got a small taste of its offerings. Check out the video, above, and note Finn immediately exclaiming, “I want to do it again!!” following each trip down the slide. Little Hen’, on the other hand, was comparatively stoic. He was more amped about the little-guy jungle gym with its own G-man-sized attractions. He inadvertantly took his first independent steps when he was storming over to the slide faster than I could keep up! (As soon as he realized he wasn’t holding on, though, the jig was up!) And now, for the requisite gallery (HTML). Enjoy!

Last weekend the Nack Pack went back to The Billy Jones Wildcat Railroad in nearby Los Gatos (“Wild gatos!,” says Finn). Check it out!

Just for fun, here’s our vid from the same railroad back when Finn was 11 months old:

We explained that Henry technically had ridden these rails back then, but that from inside Mom-O’s tummy the view was limited. 🙂

The little guy can’t let the big guy hog all the limelight, now can he? 🙂 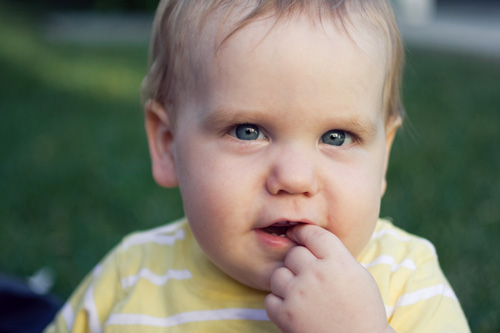 Thanks to our photographer-friend Maria for the photo. Click for a slightly larger version. 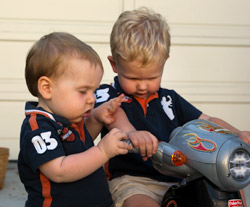 This summer has been a vehicle bonanza for the Micronaxx. Our garage is starting to look like a very small car lot. Henry got a little Tonka ride-on tractor for his birthday, and our nannies Coco and Tiffy bestowed a large Radio Flyer all-terrain wagon and a Harley Davidson Big Wheel on the boys as gifts. The boys absolutely love riding in the big wagon on their way to the barbershop, park, or to visit the newest neighborhood attaction, “the little crocodile in the spiky bush!” (Don’t worry, the crocodile is yard-art  made of cement.)

Finny has gotten super-excited about the Harley, and has really gotten the hang of pedaling himself around. (Steering is another story.) The Harley has lots of fun features, like ticking turn signals, a horn, and engine sounds. It also a “radio” that plays music–this might be his favorite feature, since he ceases pedaling and pauses to rock out, waggling arms akimbo and bouncing around in the seat. It’s the cutest thing ever, as I hope you’ll agree when you watch the video that accompanies the gallery of photos (HTML) of the dudes and their wheels.

COME, my pink-cheeked children,
Follow well in order.
O you youths, western youths,
So impatient, full of action, full of smallguy pride and friendship,
Have the elder races halted?
Do they droop and kvetch, wearied, bent by G-Man’s “walking”…?

[This post brought to you by Walt Whitman & a Cuisinart. ;-)] 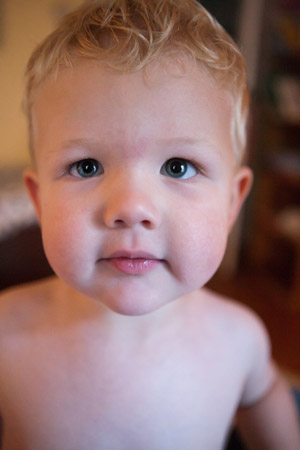 [Update: Seeing this post, the subject says, “That’s Finny up there… bein’ a nudist.”]

Having gotten Finn into pickles last summer, we thought we’d see how his little bro likes ’em. During Saturday’s sojourn to the “Meat Hut,” Pickle Lady saw our wagon rolling up and intercepted us with a fistful of pickles. For a kid who makes some crazy faces & who spits out just about everything these days*, I thought Henry handled it well:

* We call him our resident ruminant.

The resale value of a used iPhone, it turns out, is next to nil. That makes it easier to justify turning retired phones into iPods, and Finn is the beneficiary of my recent upgrade. Now he approaches me and says, “Where are those white headphones? I want a little ‘Funk Soul Brother!'”

Oddly, “Funk Soul Brother” is the one nickname we haven’t given to Goonie G-Man Little Billy Goat Henry, and Finn’s referring to a certain Fatboy Slim track. Here’s his rendition (click on the little gray triangle below the photo to play):[audio:http://www.jnack.com/micronaxx/wp-content/uploads/2010/08/FunkSoul1.mp3|titles=Funk Soul Brother] 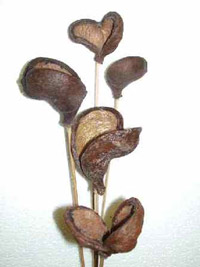 Just now as I sat in the gazebo, Finn squeezed in next to me carrying a handful of Gobots.

Time to fire up the Nack Family Secret Decoder Ring… 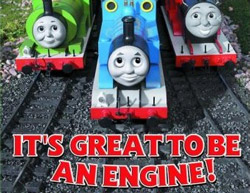 Finn’s evidently been listening closely to his Thomas videos. According to Margot,

The other day he rolled Henry’s little shopping cart over to the wall and parked it, then rolled the little walking wagon over towards the shopping cart and said “I’m going to buffer up the wagon to the cart”, which he then proceeded to do. Once the cart and wagon were “buffered up” nicely, he started pushing the conjoined cart and wagon backwards towards the couch so they’d remain buffered until he was done moving them. Cute, huh? 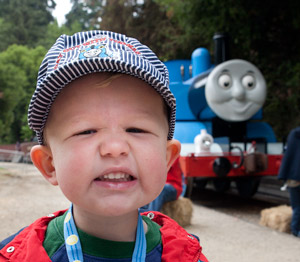 After weeks of anticipation, yesterday we departed for the Island of Sodor (er, the nearby mountain town of Felton) to ride the rails with our big buddy Thomas the Tank Engine! Finn & I had come over last year with Grandma & Grandpa Nack, but he was too little to remember it, and Henry & Margot were attending for the first time. (Last year we somehow weren’t up for taking a 2-week-old on a steam train.) As you’d imagine, we had a ball, and with the brief exception of bath time, Finn has yet to relinquish his special Thomas souvenir badge.

We even got to meet Sir Topham Hatt (“that plut’,” Finn says–short for “plutocrat”), whom Finn wanted to offer some goldfish until realizing that “his boca doesn’t move.” I think Henry may make an even better Churchill/Hatt figure, as you may see in the a gallery of good times (HTML). Plus, here’s a bit of video: 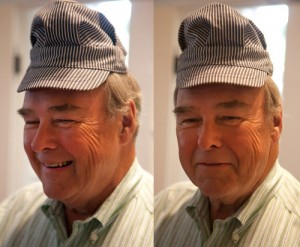 Oh, and though my dad couldn’t join us in person this year, he was certainly there in spirit. 🙂