To say that the boys are enjoying the Lego fire station & trucks my folks brought would be like saying that oceans are kind of wet. As Finn noted with some amazement while being put down for yesterday’s nap, “I just keep thinking about firemen!” Pics will follow, but in the meantime, here’s Henry’s unique take on the proper use of a rescue slide. 🙂 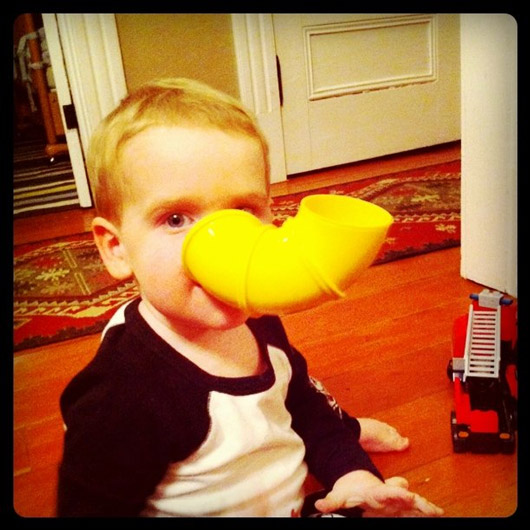 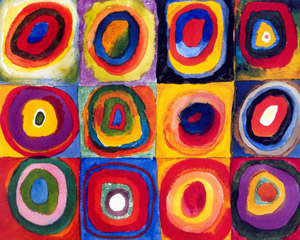 If Henry someday shoots, I dunno, let’s say President Boehner, people will ask, “Gee, did you ever see it coming?” And everyone who knows Hen will quickly answer, “Oh yes, that’s all he talked about: ‘Getboehner, getboehner, getboehner…!'” In other words, the G-Man gets *reeeeal* focused and obsessive.

Lately he’s utterly focused on garbage cans (pronounced “kahns!!”). For the last couple of weeks he’s constantly begged to go to the window (“Blue one! Black one! Wheels! Tip over! Oh *no*!!”), go outside to push, pull, and inspect cans (“Empty! Water! GarBAAZH!”), and generally discuss them at length. He was so sad when the neighbors finally rolled in their cans, mourning them like phantom limbs. When the baby monitor crackled to life this morning, “Kahns!!” was the first word out of his mouth. And after our little morning visit, he spotted Margot’s Kandinsky print (see above) and announced, “Kahns!!”

So, to any Secret Service folks who might end up reading this, just remember: Keep the kid stocked in Rubbermaid & we’ll have no problems!

Heh–you never know what’ll happen when sharing photos online. In this case Facebook friend Michael Jahn, inspired by my getting manhandled by Darth Vader, had fun adding a little drama to our recent barber shop visit. 🙂 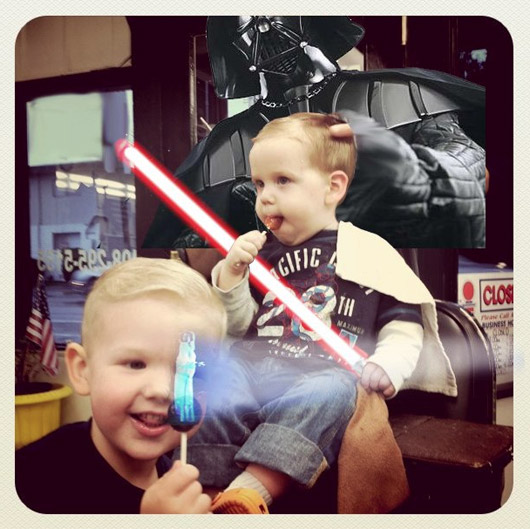 When it comes to physical daring, our big guy tends to take after his dad, being cautious maybe to a fault. That’s why I was so pleased today when, after a little hemming & hawing, he agreed to ride the roller coaster at nearby Happy Hollow park. Despite its small size, I started having flashbacks to age four, when a treacherous “kiddie” coaster was so intense that it blew my mom’s contact lens right off her eyeball! So, how did Fearless Finnster do? You be the judge: 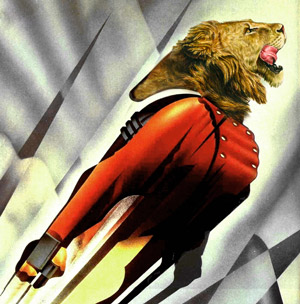 When I greet Finny in the morning, I usually ask him something like “How was your night, did you have good sleep?” or “Did you have sweet dreams?”. Sometimes the answer is “Yes, hi Mom-o,” but lately the answer has been “No. It was a baaaaad night,” which is accompanied with a twinkle in Finny’s eye. Then we launch into the following routine:

M: “A bad night, huh? What happened?”
F: “Leo…broke the ceiling again!”
M: “Broke the ceiling?! Oh my goodness! That sounds horrible! What did he do?”
F: “Well he climbed up there, and started hammering the ceiling until it was all broken. I think he had a jackhammer. He broke it into big pieces, and then he threw the pieces in the garbage.”
M: “Wow! But now it’s all fixed! Did he do that, too? Did it keep you awake, all that noise?”
F: “Yeah. It was really noisy. But I helped him fix it and then we went back to sleep [pronounced “sweep”].”

Don’t ask me how we got started on that tangent, because I don’t remember, but clearly it’s something that’s stuck with Finny. He gets a real kick out of bringing it up and riffing on it. We haven’t specifically discussed how Leo gets up there, but I’m guessing jetpack. And it’s always fun to make up stories where Leo is up to mischievous activities. Now that it’s become a regular story, we like to add our own embellishments (which he loves) like “oh yeah, I thought I saw Leo’s head poking up through the floor last night” (our bedroom is right above Finny’s).

[For my part, Finn greeted me after yesterday’s nap by announcing, “I’m a little crossing bell at a train track,” of the sort that swing back and forth. Off to look for his shoes, he noted, “I have to get my dirt”–because in what else would a crossing bell be anchored? –J.]

In terms of dollars spent per smiles rendered, is there *any* better investment than a barber buying lollipops? 🙂 Here are our little suckas about an hour ago. 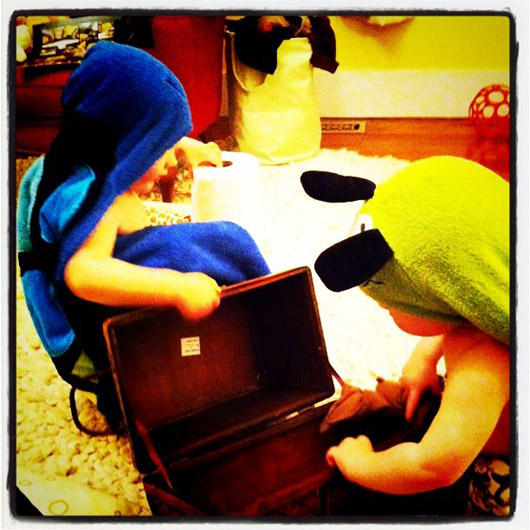 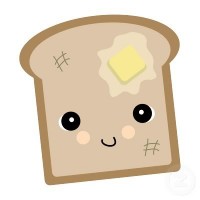 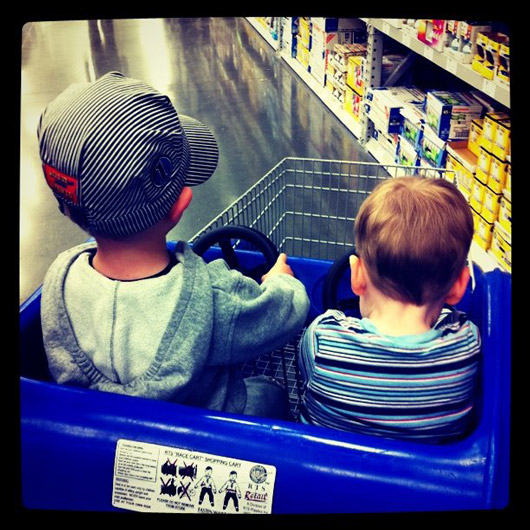 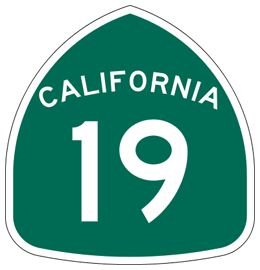 Our little Henry is 19 months old today, and not really so little anymore! He’s grown to 32.5 inches tall, 27.5 lbs, and his head is 50cm around. He’s also inherited the chatterbox gene, and is busy talking up a storm these days. He’s working hard at stringing words together into phrases. For instance, at the kitchen table, he will point at everything in sight and start labeling them: “yogurt! cheerios! spoon! cup! milk!” and then follow up with “want some!” He can also clearly articulate “hungry” and “all done” or “finished!”. John commented today that he’s very interested in calling out colors, regardless of his accuracy…so he might be pointing at a tree and say “orange!” or brandishing an orange and announce “blue! green!”.

He’s also working on “please” and “thank you,” and tends to pre-emptively say “hankEWW” when handing something to us. It comes across as very pre-emptory and puts the kibosh on further discussion, like when he spied a sack of M&M’s and shoved the toy he was holding into John’s chest with an emphatic “hankEWW!” so he could get at those M’s!

Hen’s favorite new activity is “flying”, where Dad-o (or Mom-o, when pressed) scoops him up like a little airplane and flies him around the house before coming in for a landing on Finny’s bed. He absolutely loves it and is just devastated when we have to take a breather from lugging him around! 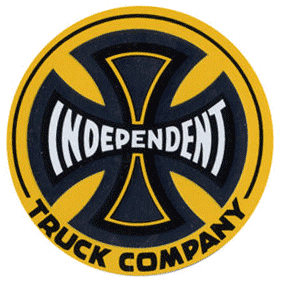 The gents and I just wrapped a fun bachelors’ weekend as Mom-O jetted off to New York for a few days with her friend Alethea. Saturday saw us logging major time at multiple parks (chase those hens, Hen! wait, they’re chasing you!), while on Sunday we helped pals Bettie & Quade celebrate their third birthday (complete with some piñata-whacking by Finn). A few pics and videos to follow soon, I hope.

The notable thing is just how independent Finn has started to get. I’m used to Henry rocketing off and/or playing by himself, but Finn has tended to stick to me like white on rice. At the park, however, he cruised off on his own towards some play equipment, leaving his brother and me stranded (sandwich bits strewn all over) out of sight. Once we regained contact, he chose to keep playing on a rather distant slide while the G-Man bounded off elsewhere. And at the party on Sunday, he’d periodically go off and explore with trucks and other toys for what felt like 10+ minutes at a time. Inevitably he’d have little existential freak-outs and start tearfully calling for me, but on the whole he’s really taking new steps.

I write all this solo, appropriately enough, from a gorgeous spot just across the Golden Gate from SF. I’m here for an off-site work event, and I could swear someone has set up outdoor speakers to pipe in seagull chatter and fog horns (nautical authenticity a go-go!). It’s a nice breather from SoloDad duty, but it’ll be nice to give the independence a rest and get the gang back together tomorrow.

“Bagel?” asks Henry from inside a play equipment tunnel. “[Am I in a ] Bagel?” Man, maybe we’re laying on the cream cheese a little thick! 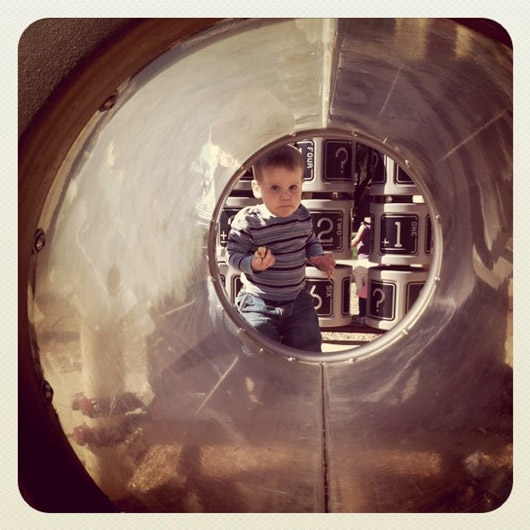 Though you can’t readily see it in this photo, the guys were perched side by side on the coffee table (sorry, hon; this is the sort of thing that happens when you leave town!), swinging their legs freely in the best Kermit the Frog style. 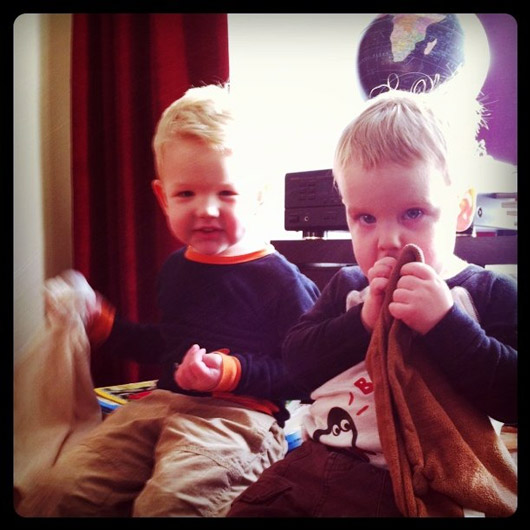 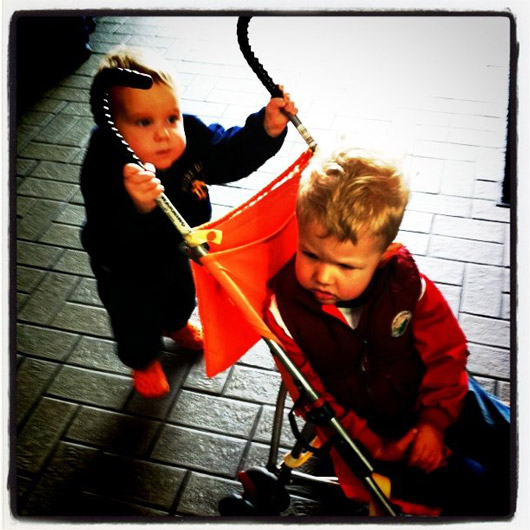