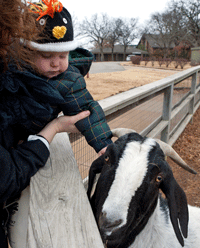 Little Hen is, let’s say, not shy in expressing his wishes, especially now that he can toss some words around. Lately he conveys his desire to be held by saying, “Dad-O, hold you??*” We’re trying to teach him to have a little patience, but he’s wily: Seeking to draw me nearer his high chair, he’ll offer to pet us. Example:

He can be trying, this kid, especially as he tends to burst into tears (which he helpfully notes as “Cryin’?! Fussin’?!”) if gratification is delayed. Ah, but then he can be so nice: As we’ve sung in the dark at bedtime the last few nights, he’s combined elements of just-read Pat the Bunny, caressing my stubbly throat & chin and saying, “Pet, Dad-O… soft, face…” What a guy, what a guy; I think we’ll keep him. 🙂

*Nearly every phrase features little pauses, then rises with the tone of an urgent, somewhat pained question.

One reply on “Henry’s Petting Zoo”

This captures the essence of parenthood so perfectly: Frustration and annoyance mixed in with awe (at the development) and love.

[Heh heh–thanks, and yeah, you know that potent mixture. –J.]