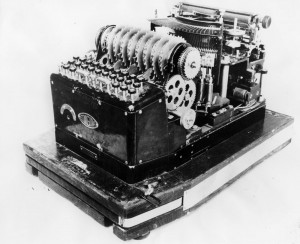 Sometimes I think we need to hire some of the WWII Navajo Wind Talkers or build our own Enigma machine to decipher what exactly Finny is talking (or not talking!) about these days. Recently, while I was getting ready for work, Finny and Henry were poking around our bedroom, and Finny exclaimed, “I want to play with that Scramble under the couch!” My response: “Whaaaat? What is Scramble? Can you describe what you’re talking about?” He said “The little pieces with letters on them that go in this big box. It’s right here under the couch.” It was then I figured out he was talking about the Scrabble game under the bed!

Sometimes, the challenge is not even to decipher the words coming out of Finny’s mouth, but the things he’s feeling when he chooses not to use words. This has become more common lately, as he tries to noverbally exert his will in various situations. He’ll grump around because he wants you to bow to his bossy demands, or he doesn’t want to do something he knows he should (like ask for things politely). He’s trying to see whether he can get away with being rude and bossy instead of polite (short answer: NO.).

Last night, Finny was terribly grouchy, whiny, and petulant (without giving me anything to go on), and he was raising a big stink about wanting to watch one of his fire engine videos. I refused on the grounds that he had been a totally grumpy handfull all night long, so I wasn’t rewarding that with a video. He was unhappy about it, but seemingly went to bed quietly after we read a book. An hour or so later I heard him moaning and crying in bed, and when I went down to check on him, he wouldn’t explain why he was crying…but I figured out he was still upset about the video.

Tonight, after a prolonged late-afternoon doctor visit where he was a total gem, he asked about the fire truck video, and told me he would not cry, whine, fight, or kick like he did last night, and that he would be good so we could watch the video. I was impressed that my 3 year-old boy had sorted through last night’s episode and decided at last to verbalize his feelings. It just lightens my heart when we make tangible progress through these kinds of rough patches.

[“These tiles don’t want to be obedient!” said Finn the other day, mashing the Scrabble set. “They just want to friggin’ *panic*!” Oh boy: we tell Finn not to “panic” when he’s emotionally derailing, and as for the language–well, more on that in a bit. –J.]

One reply on “Deciphering Finny”

This little story makes my heart melt from half a country away. Maybe it’s because I was unhappy and crying and grumpy all night too. 😀