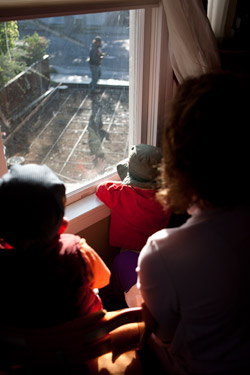 ‘Tis better to give than to receive, right?

With that in mind, on my birthday I/we gave the boys a pretty great treat: front-row seats to the Exxxtreme Destruction of our driveway via a team of workmen, followed by its re-paving. For months we’d been meaning to repair the damage necessitated by our sewer line work, and last week we finally made it happen. Finn & Henry were *thrilled* to pull up chairs and watch a jackhammer-wielding Bobcat lay waste to our concrete, then scoop up the shrapnel, after which workers laid rebar & finally poured new cement. Check out our gang enjoying the show.

For me Finn’s verbal inventions were the best part. Some months ago we started making up stories about a cement truck driver named Zeke. Our barber Tom has three sons named Tom, Julian, and Clemente. Finn decided that Zeke’s boys must be named Tom, Julian, and Cemente. Thus we loved playing name-that-dude, assigning names like “Zeke” to the workers. Oh, and Finn (often aka “Blackbeard”) dubbed the hairy, heavyset foreman “Chubbybeard*’–though not to his face! 🙂