What the heck is “Germany,” and who are “Germans”? If you asked the Micronaxx, you’d probably hear that it’s a land of pirates, peopled by hamburger-eating dudes with tiny eyes (wearing tiny glasses). After all, we’ve decked the boys out in jolly roger shirts and devised a whole piratical mythology about Hamburg. Anyway, we’ve had a couple of funny exchanges on the subject:

As Margot was on an early morning conference call with her team, Henry asked, “Is Mom-O talking to Germans?”
“Yep,” I told him.
Finn-O jumped in: “No! Nein nein nein nein!!”

Later, after hearing me blow off some steam regarding my job, he began to sing: “Peanuts are green, roses are red… and Germans are crazy!” ;-p

“Goonie, I’m a bridge! Walk under me!” Showing admirable judgement for a 2-year-old, the little guy declines. 🙂 (Soon enough he was begging to be lifted up to match his big bro’s moves.) 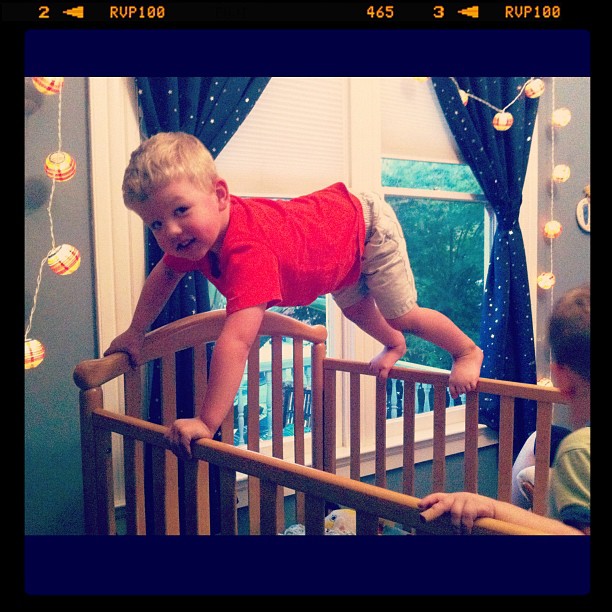 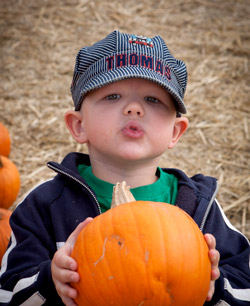 As Beldar Conehead would say, “We will honor your Halloween ritual by paying homage to the symbolic vegetable orb!” 🙂

We’ve had fun taking the lads to the pumpkin patch with their Pasitos amigos, and then over to Casa de Wiggin for their first pumpkin carving. Check it out! 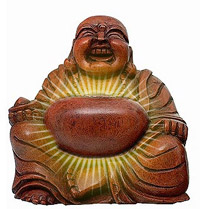 Henry despises having his hair washed. He hollers, cries, squirms and complains about getting his hair washed Every. Single. Time. We’ve had him watch his brother stay calm and cool during the whole process, hoping he’d observe and learn. We’ve tried all sorts of techniques to make the hairwashing more pleasant. We’ve even tried to wash his hair as infrequently as possible, but he’s a little boy, and the grime builds up fast!

Finally, we came up with a bribe (a chocolate-covered raisin) and an accompanying chant (a bathtime chanty?) that goes a little something like this: “Calm and cool and you get a RAI-sin!” We sing it over and over while we wash Henry’s hair, to remind him that he can stay cool, and also to try and distract him from the proceedings. Finny even sings along with us. The phrasing is based on one of the guys’ favorite cartoon characters, Fireman Sam, whose theme song admonishes listeners to stay “cool and calm” when they hear that fire alarm. The little song actually seems to work for little Hen, who tries very hard to settle down, knowing that the coveted raisin is coming!

We find that we’re advising the guys–and ourselves–to stay cool and calm quite a bit these days. Two-year old Henry,  who already has his Master of Histrionics degree, and Finny the three-and-a-half year old who’s struggling for total independence, tend to lose their cool more frequently than we’d like. There are many reminders to “use your words” instead of going from zero to instant hollering/whining, reminders to share, reminders to ask for things nicely instead of grabbing and snatching, and reminders to stay cool and calm in order to achieve one’s desired results.

Every once in awhile, we can see our hard work paying off. Last night, as Finny erupted into a fit about something at the dinner table, I calmly & coolly told him his options were to chill out and stay at the table, or go to his room until he could be nice to be around. He of course chafed at his options and began to reload the barrels of his whine cannon, until I gave him The Look (you know the one, the “I mean business” look). At which point, he hopped off his chair and retreated to his room without another word. John and I looked at each other in amazement. We may have even high-fived! And when Finny came back a couple minutes later, cool and calm prevailed.

John nudged me and whispered, “I think we deserve a raisin!” 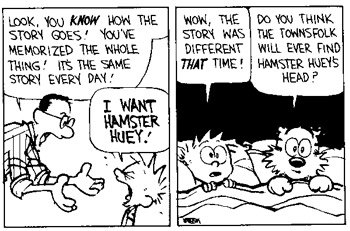 Poor Calvin’s dad. Growing up I never understood why, when asked over & over to read Hamster Huey & the Gooey Kablooie, he’d groan & roll his eyes. I get it now.

For the last several weeks (months? millennia?), Henry’s insisted that I “tell the Mater story,” recounting Rescue Squad Mater (see below) from memory. I’m a pretty transparent guy, and I guess I must’ve muttered some complaint after the thousandth telling. Today as I put him down for a nap, I thought I’d gotten away clean–until from the darkness I heard “I would like the Mater story, Dad-O!” As I was busy palming my face and heading back into his room, Henry added gleefully “…again and again!” Busted! ;-P

Ah well; someday, I know, the last thing the guys’ll want is to hear stories from the old man. For now I try to enjoy it, again and again.

Q. What do twelve bucks & an idle Friday night get you at Goodwill?
A. Pinktastic threads!

Today we helped little friend Charlotte celebrate her third birthday at a pink-themed party, so last night we did a quick run to the store and got a few fun accessories. Henry kept disappearing in his lid, and I felt like cutting holes in the top so that he could look through it (a la that kid from Fat Albert ;-)). 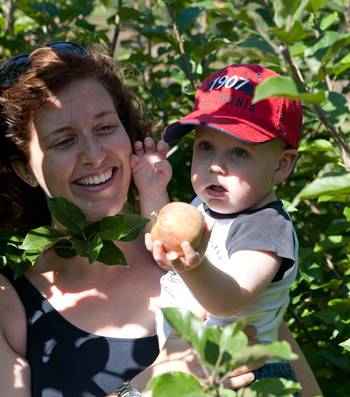 Yesterday we took the lads to an apple orchard for some apple picking with a few of our (and their) friends.

We drove over towards Watsonville, and as we arrived, the sun broke through the clouds and set us up for a perfect day. Everyone had a blast. Finny was excitedly counting the apples in his special green apple bag, and at the bottom of the (very steep) hill, there were cute horsey tire swings for the kids to ride, and a shady spot for the parents to rest. Here’s a little gallery of the proceedings.

After our orchard adventure, we drove over to Moss Landing and picnicked on tacos and burritos in a cute little park. The park was next to a terrific little art gallery, where the artist had built all sorts of fantastic play houses for kids, including a submarine turret, caboose, and lighthouse. Needless to say, the kids loved clambering around and acting as lookouts from the top of the sub.

We took a bunch of our small apples to preschool today to share with the class, and we made apple crisp out of some of the bigger apples. Finny and Henry enjoyed sampling the goods as they transferred them into the cooking pot! It was a terrific way to wrap up the weekend.

As Finny might say, “Ay Dios mio!” A couple of weeks ago at “pre cool”, Henry lost his beloved little owl blankie, better known as Ollie. When John arrived at Pasitos to pick the boys up at the end of the day, Henry immediately told him about his missing buddy. None of the maestras had been able to find him after searching high and low. John told Henry that perhaps Ollie had decided to fly home and would meet Henry there. And after a quick, surreptitious text message to me, I grabbed one of our spare Ollies and had him ready and waiting!

Henry, of course, was none the wiser, and was amazed that Ollie had “flown” home on his own! Now, John and I were slightly worried that the original Ollie might show up at preschool again, and we were hoping the maestras would be savvy enough to hide him if they found him, so we could stick with the idea that there was only one buddy.

The following week, the boys went to school with buddies in tow. This time, when Dad-o arrived to pick them up, he was in for a big surprise…He walked in the door and was met by an ecstatic Henry, who exclaimed “Two Ollies!” Turns out Henry found Ollie #1 tangled up amongst his nap gear (mat, sheet, blanket), and of course he was already cuddling Ollie #2. We’re not sure if he came up with this on his own, or if one of the maestras planted the seed, but Henry came to the conclusion that the two Ollies were brothers, and that one of them had flown to preschool during the lunch break. And rather than being confused about double Ollies, he was joyful! Now he had two buddies to snuggle – what could be better?!

Ever since, Hen’s been vigilant about having both Ollies around for naptime, playtime, and bedtime. Of course, that means that we now have yet another buddy to keep track of, but it’s worth it. It is absolutely adorable to watch him cuddle both guys wearing an ear-to-ear grin.

At risk of burning you out on these things, here are a few more Henry-isms gathered over the last several months: 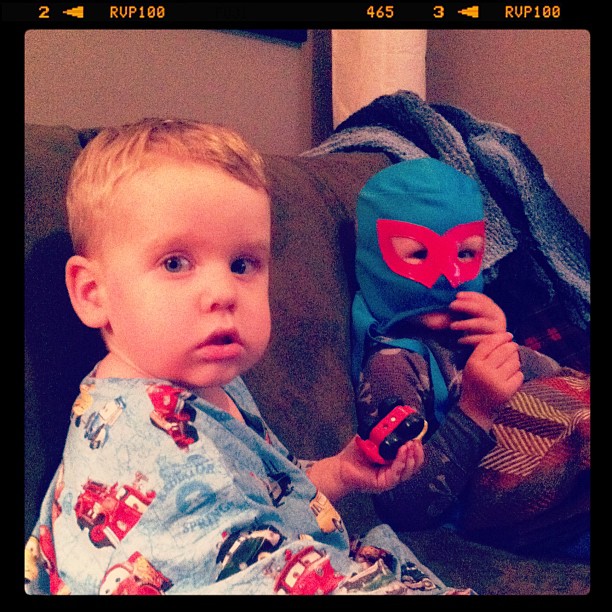