You know who loves being chopped liver? Me! 🙂

The lads had a terrific week with Grandma Nack. Normally the guys stick to me like white on rice, and every morning starts with urgent requests to hang out. Not last week, though: Finny would make a beeline into Grandma’s room, and Henry happily skipped past me to see her. I’d find them reading books (Mom started Finn on Little House on the Prairie, as she did with me at age 4) or rampaging on the pull-out bed (“Stunt Coursing!”). At one point Finn asked Grandma not to use the bathroom that sits between her room and his: “Well, I’d wake up & not know what that light was–and one time I looked through the key hole and saw a Grandma face in there!”

Here are a couple of videos of Mom reading to the guys. They’re not exactly action-packed, to say the least, but it’s fun to see the very first reading of Little House–and the thousandth of Henry’s “things that go” book:

We had a ball at the Santa Cruz Mountain Bike Festival last weekend with our pals the Wiggii, future (heck, current) biking phenom Dillon Hall, and his folks & little sister. Our guys have been pretty indifferent to cycling, but the Finnster got caught up in the spirit of the day. Check out his ride on the “stunt course” (a term he’s been re-using all week for the various pillow obstacles he’s erected):

John never uses simple words to describe things to the boys. That would be far too boring. He always chooses exciting-sounding words to describe things that are otherwise kind of dull. For instance, instead of learning new “skills”, the boys learn “new techniques,” such as jumping and spinning, putting Legos together in new ways, or playing new games. We frequently hear “Mom-o, Dad-o, check out my new technique!”

Well, it’s only Tuesday night and already this week the boys are working on several new techniques! Just this evening, Finny did a few somersaults, something he’s never done before! And starting yesterday, he and I started working on learning to read. He expressed a keen interest in understanding what words look like, so I told him we could work on a couple new ones each day so that he could put together the various sounds that letters make when you combine them into words. We’re working on easy ones that look like they sound, so we can sound them out: dog, up, go, big, boat. I’m so excited that he wants to learn more!

Henry’s working on a new technique as well, big-guy style. When I got back from my trip to Seattle last week, the first thing he told me was that he’d peed in the potty! He was so proud of himself. I’ve asked him a few times since then if he’d like to give it another try, and he’s agreed to try it a couple times.  Tonight, another successful “potty shot,” so I think we’ll start encouraging him more (and bribing him with stickers. Oh, and now that Henry’s getting potty shot stickers, Finny wants to get stickers, too. So Finny gets “word” stickers when he sounds out words successfully).

Lego.com wants to test the bounds of my sanity: its Pick-a-Brick feature had me dancing on the edge of madness, clicking through *hundreds* of pages of pieces, choosing great & offbeat ones I thought the guys would enjoy. After I made my selection, we’ve waited (im)patiently for weeks as the literal slow boat from China inched closer with our bespoke loot. And what do you know, it finally came! Here’s a little “unboxing” video, courtesy of Mom-O:

Too bad you can’t see their initial excited freak-out upon realizing what the white envelope contained. It was much like this clip, wherein Finny got a birthday Lego ambulance from his friend Cyrus: 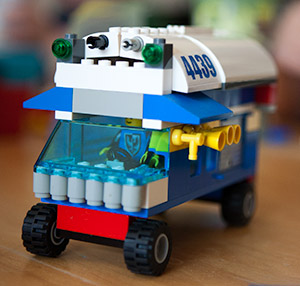 What’s better than visiting Treatbot, the karaoke ice cream truck? Answer: Visiting Treatbot, then going home and building one’s own Lego Treatbot! Check out the mystery machine we built following our trip to “A Movable Feast,” complete with roof vents, a side-opening window, and what Finn assures me are whipped cream dispensers. 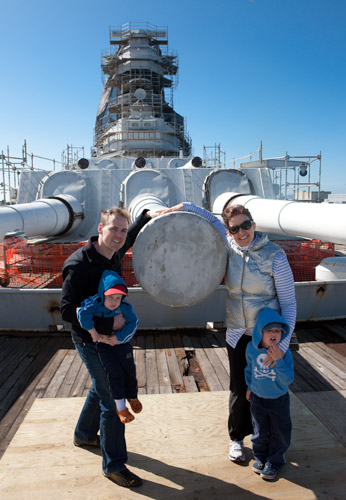 Break out the big guns: On Sunday we journeyed to nearby Richmond, CA (north of Oakland/Berkeley) to visit the USS Iowa, a famous battleship (or “battle boat,” as Finn put it) of World War II. We also checked out the cargo ship SS Red Oak Victory moored (and long ago built) nearby. Though Finn quickly tired of the cold wind, Salty Hen really enjoyed swinging his mallet aboard that freighter. (A bright career as a “deck ape” may await!)

Here’s our gallery o’ pics from the day.