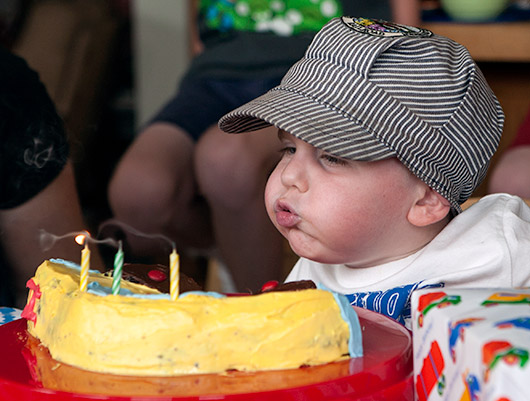 Our little Mr. Henry Nack officially turned 3 today! We had a big birthday party for him while we were with the rest of my family in Colorado last week, complete with a VW Beetle-shaped cake, homemade ice cream, and presents; check out the photos. Today we had another, smaller party with our friends the Wiggins at the park down the street. This time we celebrated with a big ol’ pizza and a tiny little cake, and lots of running around!

Although Henry has not really grown much taller during the past year, he has made enormous leaps and bounds in other ways – both literally and figuratively! Figuratively, he’s become so articulate and conversant – especially in the last couple of months. He easily articulates pretty complex ideas and observations, and recounts events and conversations in great detail. He and Finny have extensive conversations and make up elaborate narratives while they’re playing. And literally, he has started hopping and jumping around like crazy, especially when he gets excited about something. For a little guy, he gets pretty good air! He also loves physical horsing around with all of us, and usually starts laughing uncontrollably when we tumble around with him.

His love of vehicles continues unabated, and he reaped many wheeled and winged presents for his birthday – including new variations of his favorites, Lightning and Mater (from Pixar’s Cars). He is also nuts for fire fighting, and was THRILLED to receive his fireman “backpack” – which is a tank you fill with water, then pump out the attached sprayer hose (usually onto his brother).

His fondness for owls is also going strong, and he received a couple of terrific owly gifts. Grandma Nack gave him a beautiful book about an owl flying around at night, and his Auntie Laura made him a super-cute little knitted, stuffed owl with big brown eyes, named “Roy,” just like the one his cousin Patrick has.

We can’t wait to see what Henry’s next year holds in store. He’s off to a terrific start!