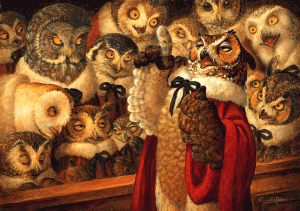 The boys rooms are slowly turning into wildlife refuge areas (of the faux-fur, stuffed variety, that is). As you know, our man Finny is a big lion fan. He has amassed several leonine amigos, in addition to his standbys Leo and Leomaran. Friends and family have cottoned on to his love of all things lion. His growing pride now consists of those two, plus Cuttely Buttey, Whiskery Fellow, Rar Rar, Tiny Lion, and Lion Pillow.

Henry is doing his part to build an avian sanctuary. His love for owls started with his little blankie buddies Ollie and Catamaran, and has now expanded to include Blanca, Watchful Owl, Hoo Hoo, Big Owl, Roy, an owl-to-be-named later given to him by his grandma, and Owl Pillow. Having heard that his brother’s group of lions is called a “pride,” he asked what a group of owls is called. So, we looked it up and found out that groups of owls are referred to as “parliaments.” I think this must make Henry the Minister of Strigidae.

[While Googling just now for an appropriate illustration, I came across the story of a lady with an 18,000-item collection of owl paraphernalia. Yeesh—I think G-Man may be on his way to becoming a Crazy Owl Lady! –J.]

3 replies on “Of Prides and Parliaments”

Tara, that is hands down the wittiest comment we’ve ever gotten on the blog! Love it 🙂

This makes me want to send them stuffed critters in hopes mine will get a cool name.