This weekend brought an unexpected treat: My old Notre Dame friend Bryan Mason, whom I hadn’t seen in probably 20 years, paid us a visit as part of his West Coast sojourn down from Alaska (where he’d spent the summer working on a fishing boat). “I have to warn you,” he jokingly told Margot and me upon arriving, “I’m pretty great with kids.” And so he was, quickly immediately himself as “Tío [Uncle] Bryan,” master builder of everything from Legos to sand castles.

We all had a ball taking him to a perfect beach day in Santa Cruz, and the boys were kind of blown away at all the help they got in building some epic volcanoes in the doomed “Financial City” (so named due to Henry plopping out a dozen little “banks” with a little sand mold). This morning Finn remarked, “I thought that with another adult around, it was going to be just ‘talkity-talkity-talkity,’ like usual at my birthday party or whatever—but it was super fun instead!” Henry enthusiastically concurred.

Here’s a little gallery of the sandy goings-on. 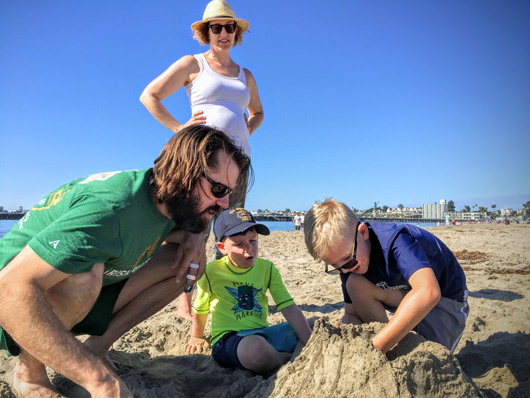