With Margot & her dad opting to take it easy on Thursday morning, the guys & I accompanied Laura’s family to Rockefeller Center for a trip to the Top of the Rock. The beautiful weather afforded us sweeping views of the city. I’m still not convinced that the boys know New Jersey from Brooklyn from Harlem, but I think we made some progress. ☺️

After that, we met up with Margot in my old neighborhood of Brooklyn Heights (making a brief detour to Remsen Street, where I found my late, beloved cat Remsen) in order to visit the NY Transit Museum. Train-loving Henry was predictably over the moon—saying specifically, “I love this to Pluto and beyond!” We scored him some terrific subway-themed socks, and he treated himself to a little working subway setup.

Following the museum visit, we grabbed a car to Grimaldi’s Pizza under the Brooklyn Bridge. After the boys drew on the plates, we wolfed down what Finn is (justifiably) calling the best pizza he’s ever tasted, then walked over the bridge.

Last—and by no means least—we rejoined the rest of the fam to head to our first-ever Yankees game up in the Bronx (exactly as spelled out on Henry’s miniature set—161th St. station). Seeing Grandpa Liggett’s name flashed up on the Jumbotron was a particular treat.

Here’s a gallery from our jam-packed day. 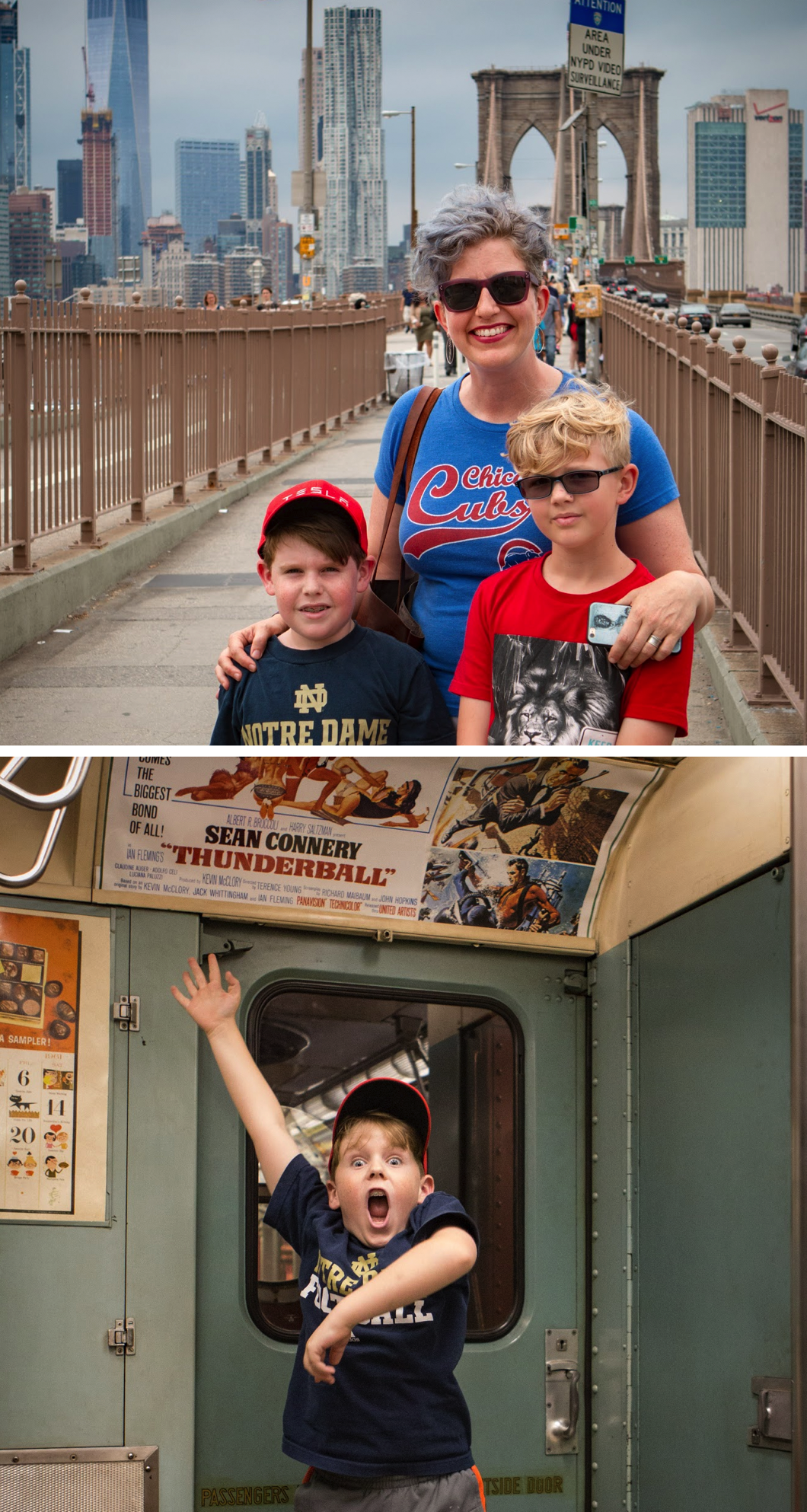 By Tuesday the rains that doused us Monday had largely moved on, so we made our way out to Liberty Island to see the big gal in person. As souvenirs the boys picked “Liberty” and “Donut,” a crown-wearing lion & panda (hey, it’s a free country 😉).

Following our visit we sailed to nearby Ellis Island. Hen loved the historic train artifacts (“Look, it’s the WaBASH line!”), and I enjoyed/winced at the collection of ethnic newspapers and propaganda posters.

From there we sailed back to Manhattan and visited the Flatiron Building (a longtime favorite which we’ve built in Lego!). We walked to the High Line—an elevated subway track that’s been converted into a park that meanders through, among other things, the old Nabisco factory that’s become Chelsea Market (where we had dinner). Henry particularly enjoyed the benches that roll along the old railroad track.

Lastly, after getting everyone home for the evening, Margot & I found the energy to rally & hit one of our favorite Manhattan bars, the Peninsula Hotel. Here’s a gallery of the day’s explorations. 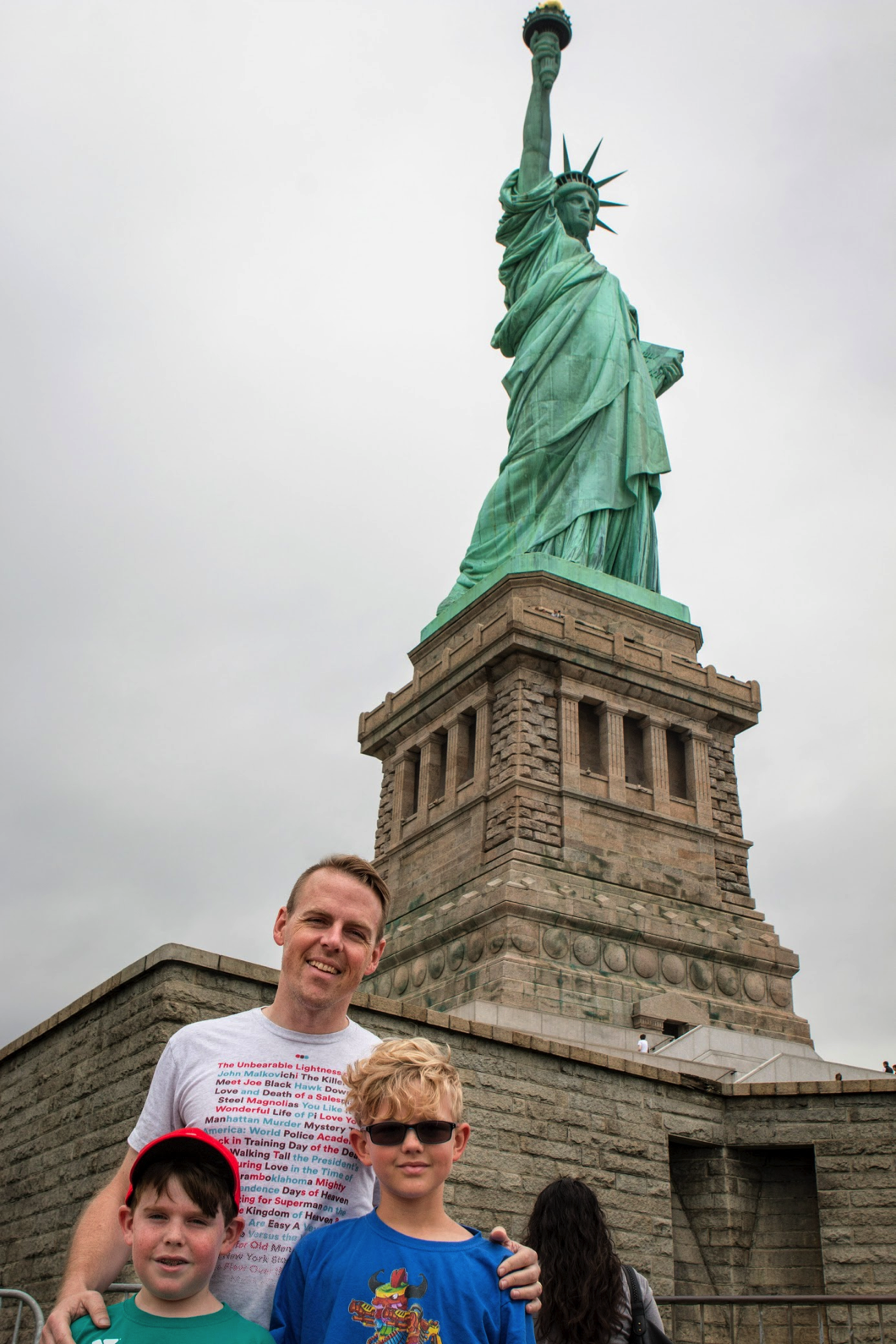 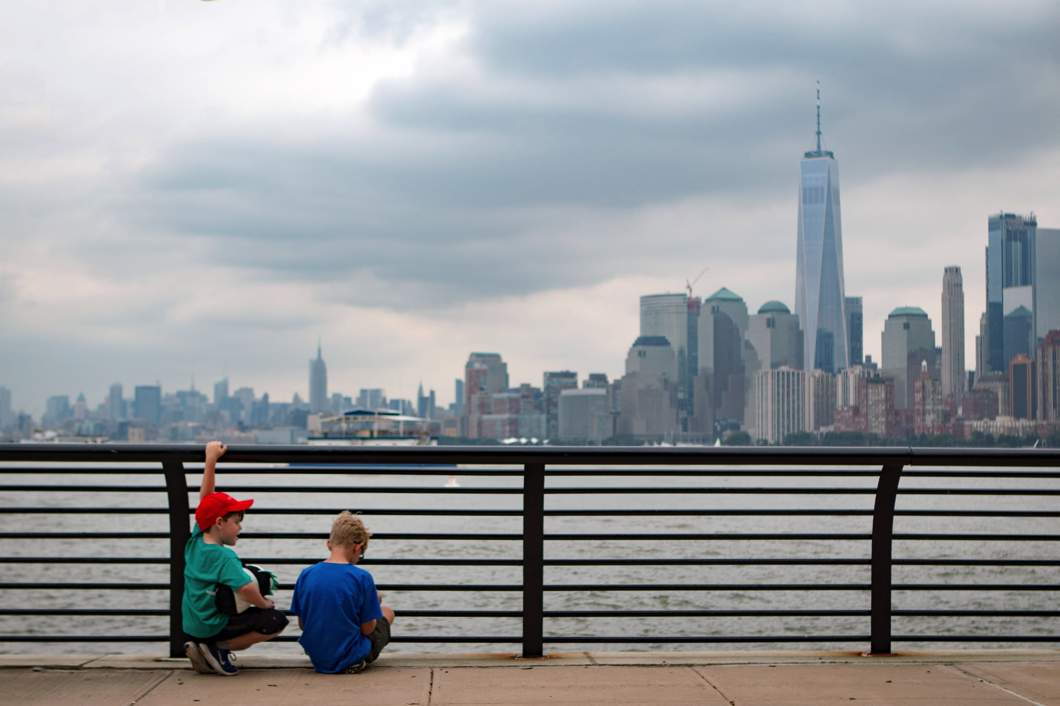 Given that our flight wasn’t set to leave Newark until afternoon, we decided to spend some time Saturday exploring a bit of Manhattan’s historic Lower East Side. At Katz’s Deli the boys & I challenged each other to partake of some especially sour pickles; Finn learned that bacon sadly isn’t kosher (darn!); and we washed things down by splitting some cheesecake. Afterwards we discovered Economy Candy (where Hen scored a Tootsie Pop the size of his head) and made our way to Morgenstern’s Ice Cream (perhaps you’re detecting a theme? :-)). Here’s a brief photo/video montage from the day:

Man, we’ve been zooming around the city like mad, barely catching our breath.

Today we started out at the NY Public Library, home to the stone lions Patience & Fortitude, who Finn & Margot knew from their roles in the Percy Jackson book series. After that we split up, with the boys & I heading up to Central Park for some exploration, boating (a first for all of us!), and watching street performers (the Afrobats). Happily Hen (mostly) overcame his fear of sailing into the bushes, and Finn’s “interpretive dance” style of rowing didn’t result in (permanent) oar loss.

Now we’re all laying low a bit at home, grabbing some chicken on the corner & watching The Hunt for Red October before Margot & I head out for a nightcap. Here’s a little gallery from our day. Note that you can click the stretched-out panoramas to load them into interactive 360º viewing mode. Enjoy!

Greetings from sometimes rainy but always thrilling New York! I’m being pulled out the door for day 2, but in the meantime here’s a little gallery of what we’ve been doing so far—visiting Brooklyn and the 9/11 Memorial, sailing around the harbor, and more. To be continued! 🗽😀 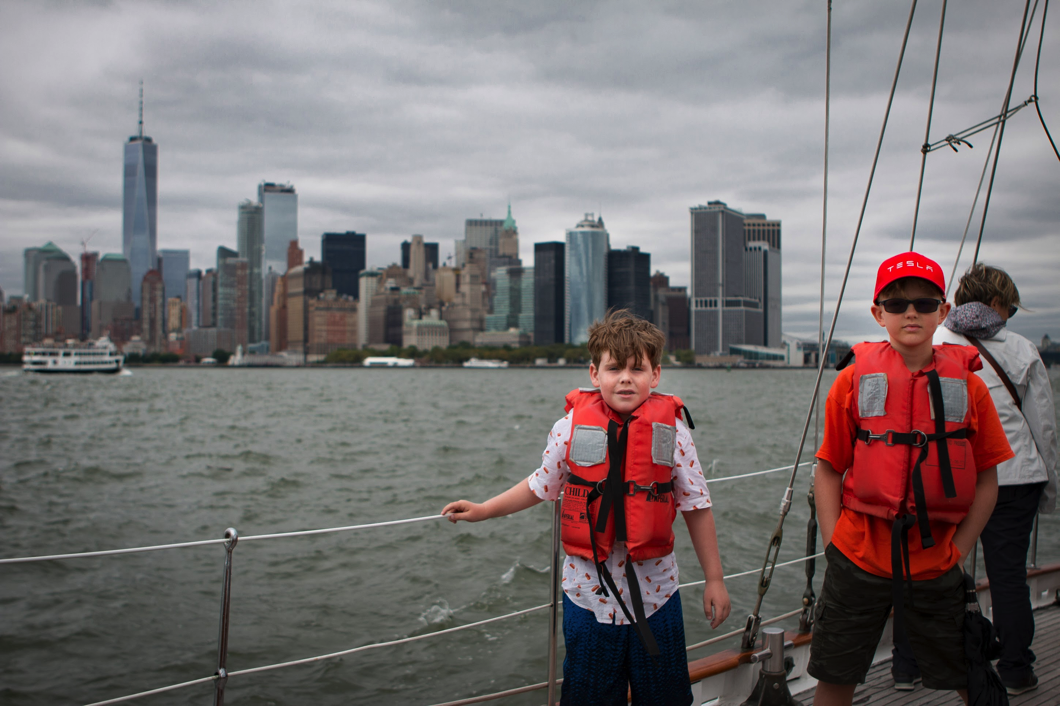 Twenty-odd years ago, I took young Ted Nack to a rodeo in Galena where we saw Whiplash The Cowboy Monkey—a crazy little collie-riding Capuchin. I’ve never forgotten that little dude & had told Margot and the boys about him over the years. Imagine my surprise and delight, then, when I learned on Friday that not only is Whiplash alive & well (age 25!), but that he was coming to a rodeo near us. Check out this brief tour of our trip to the California Rodeo in Salinas yesterday—and Whiplash, long may you ride!

Continuing our great tradition from the last 5+ years (see previous installments), we were delighted to join our gaggle of Las Madres pals for some s’more-spattered fun in the woods. This year was beset by bees & biting flies (released, no doubt, by the increasingly large & far-ranging kids’ explorations), but fortunately our dudes were mostly spared. Highlights included playing Old Maid, Mancala, and Rush Hour Jr. Check out a gallery from the adventure. 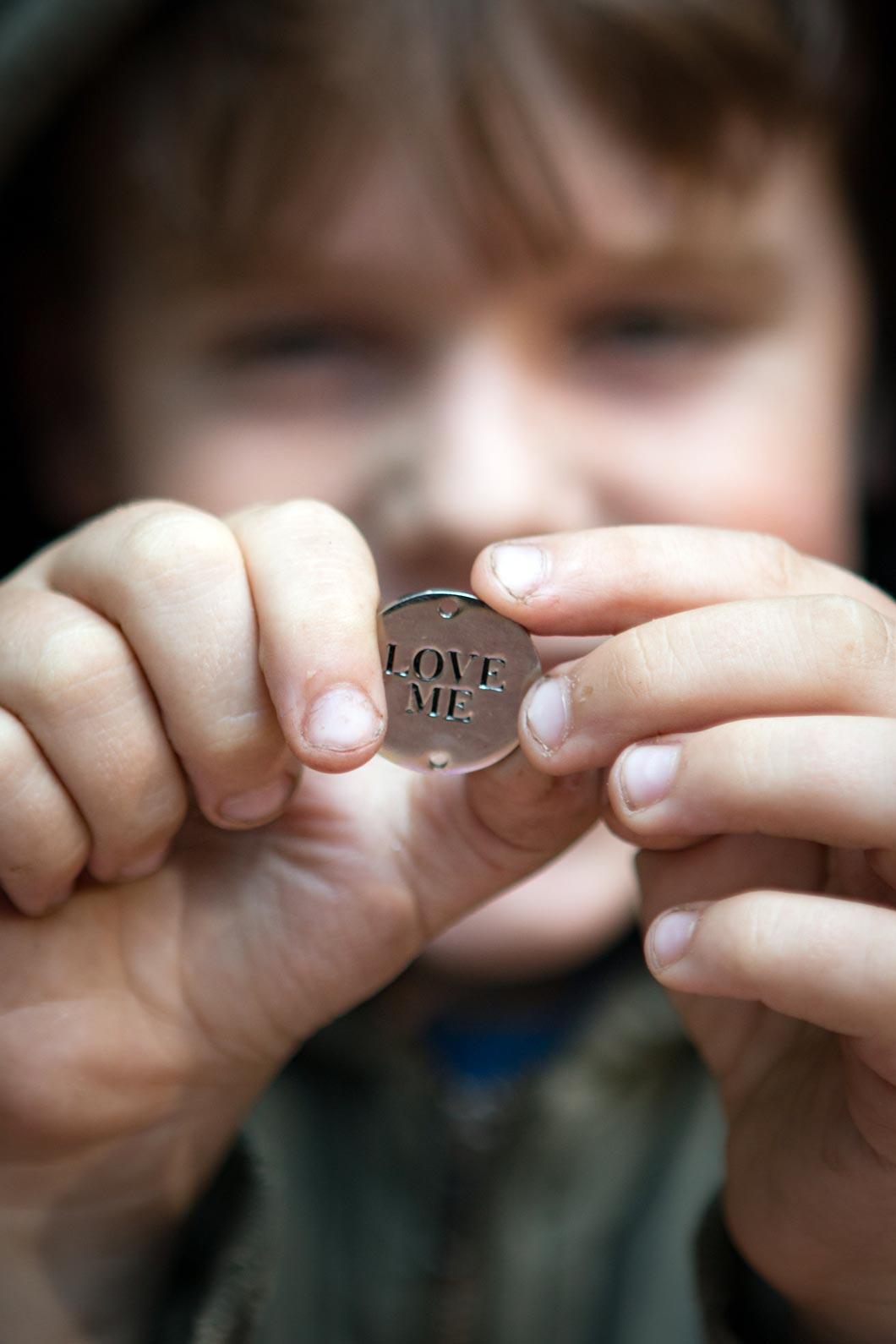 We’ve been having a great Fourth of July here in San Jose—missing our traditional Leadville scene a bit, but happy to get to party with Las Madres pals along the Alameda. You can check out a little gallery of photos by mousing over the image below & clicking the little arrow at the right, or by