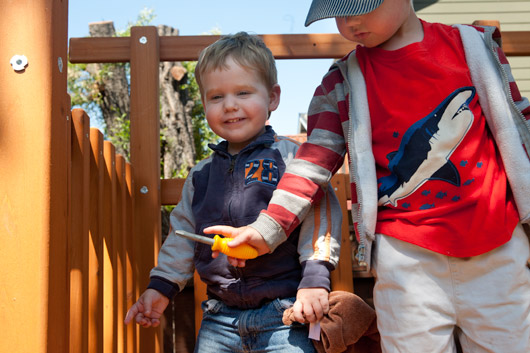 We’ve just put the finishing touches on a very busy weekend with the boys. In addition to riding on Thomas the Tank Engine Saturday morning with friends, we built a terrific new play structure/swingset in the backyard (a.k.a. the “Nackyard”).

John and I had been talking for a while about getting some kind of jungle gym or swingset for the guys, and after tons of research, we found one that we thought would be both super-fun and would fit the smallish space we had available for it. It was delivered to us on Thursday in three enormous boxes on a huge pallet, and it was up to us to build the thing. The estimate on the instructions said 5-7 hours, so I figured we’d be doing really well if we doubled that and assumed we’d need two solid days. 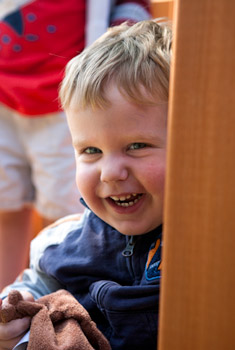 After sorting and labeling the hardware, and grouping the lumber into piles, we set to work after lunch on Saturday. We got the skeleton of the base constructed and left the rest ’til Sunday. I got a bright and early start at 8:30, and by 10:00, we’d gotten the climbing wall on, the deck finished, and the swingset support arms up. The boys were anxious to know when it would be finished: “about 30 more minutes, or more like 45?”, asked Finny repeatedly. They were happy to help out by using their own play tools to hammer, saw, and drive screws. We worked through the afternoon after a quick lunch break. Even though we made a deal with Finny that we wouldn’t put up the swings and flags until after naptime, he decided he was too excited to sleep and came out to hang out with us while we finished up. He was so thrilled to help Dad-o put the flags on, test out the swings and trapeze, and do an inaugural run down the slide (belly first!). 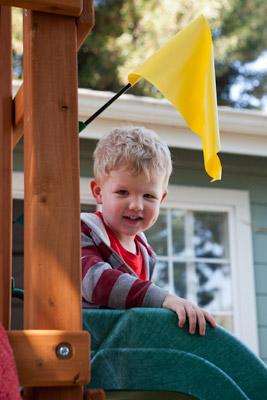 By the time Henry woke up from his nap at 3:30, we had the whole thing done, and the guys spent the rest of the afternoon playing their hearts out. Standing on the deck preparing to slide, Henry looked at me and remarked with a grin, “I like this play equipment, Mom-o.” Here’s a gallery of the weekend’s proceedings, and a shot of the finished set. Viva la Nackyard!

Mealtime greetings from Henry & his stuffed buddies. (As it happens we’ve just retired his “hopper” (clip-on booster) shown here, having promoted him to a big-guy stool. End of a tiny era. :-)) 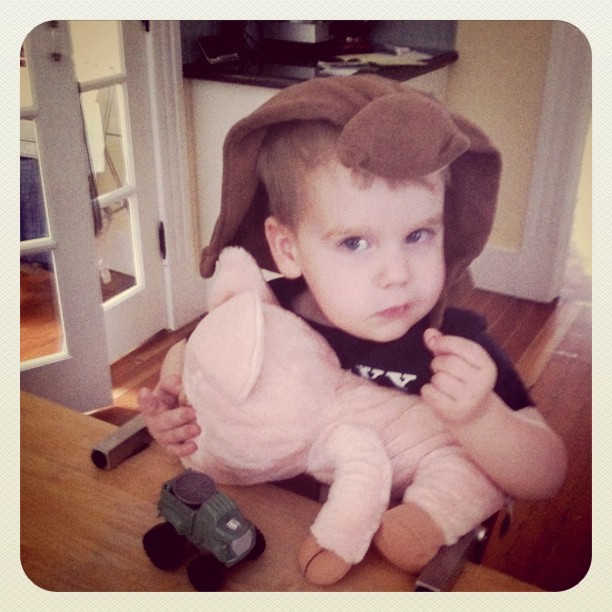 The boys have really enjoyed the Curious George book Henry received for his birthday courtesy of our friend Eileen Whitson–popularly known as “MrsW.” I managed to catch the G-Man in the act of telling her thanks–a little endeavor that quickly sidetracked into a bizarre little 2yo’s imaginary tour. (Having just gotten off the train, he’s referencing Finn’s Cheerio-tossing escapades.) Press the gray triangle below to take a quick listen:
[audio:http://www.jnack.com/micronaxx/wp-content/uploads/2011/07/ThanksMrsW.mp3|titles=ThanksMrsW]
(In case the audio player doesn’t work for you–for example, on an iPad–here’s a direct link to the sound file.)

And apropos of nothing, here’s a shot of Henry yesterday gathering flowers while helping the rest of us trim branches & haul them to the street. He’s intense in his craft! 🙂 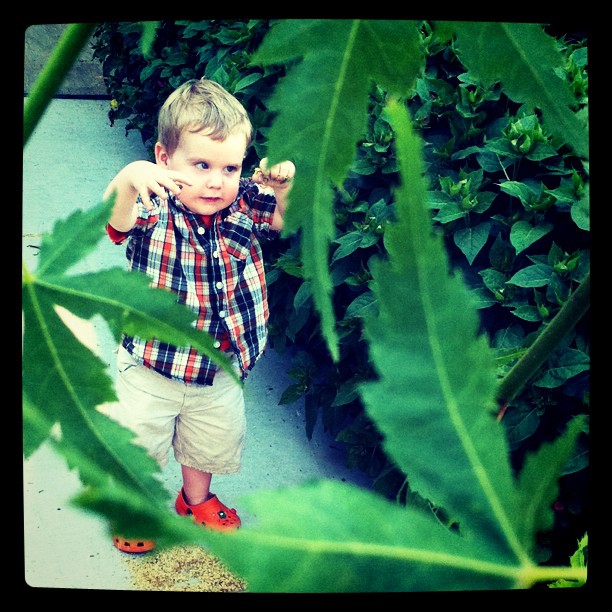 Recently I decided to try a new strategy on our histrionics-prone Henry. He really seems to enjoy crying at the drop of a hat to express how he’s feeling about things. Don’t like getting your dipe changed? Bring on the caterwauling! Don’t want to eat what you requested for breakfast? Time for crocodile tears! Feel like protesting before your day at preschool? Cue the shrieking. You see where I’m going with this…

Time for a change, I thought to myself. So this weekend, after Henry cried and screamed his way through having his hair washed (as usual), I talked to him about what it might be like if he chose not to cry. l said, “If you could stay cool and calm during hair washing, things would go so smoothly! And quickly! And you could have a treat like an Oreo or something.” He sort of seemed to understand the no crying = treat idea.

Then I thought it might be worth prepping him with the same idea before preschool on Monday. Lately he’s been crying quite a bit at drop off and sporadically during the day. He can be such a sweetheart but he’s starting to become known as “the kid who cries a lot.” Not great. So on Sunday I talked to him a couple times about preschool, and how he could decide to be a happy guy and not cry at preschool. I reminded him how much fun it was, how Finny was always there to help him out, how he could have Ollie if he needed him, and how much the nice Maestras like him. I said “really, there’s no reason to cry, Henry. Preschool is fun, and it will be even more fun if you decide you don’t want to cry, and that you want to enjoy yourself.”

[Update: Hen did even better today, not peeping even once in protest when I dropped off the guys! Way to stick the landing, kiddo. As Borat might excitedly say, “Great success!!” –J.]

In cleaning out my phone* today, I stumbled across some old photos & videos I’d neglected to share. Here’s kind of a nice, quiet post-bath moment with Henry from a few months ago, wherein he explores a bubbly little truck and does his best impression of a parrot.

* What a weird concept, isn’t it? Who knew that telephones would eventually need to be cleaned out (of data) & not just off?

What’s even cooler than riding a cliff-hugging train at 10,000ft? Discovering a pack of vintage railroad motorcars and getting to climb on them!

On the train we happened to sit next to a nice older couple from Nebraska who mentioned that they were in town to drive their motorcar–a retired RR maintenance machine–up the track with a bunch of other enthusiasts. We followed them off the train & got to clamber around their little ride! They told us to come back for the big gathering the next day, so we brought back Patrick & Charlie. The drivers couldn’t have been nicer to all the kids, and we even got to scramble around on a full-sized locomotive. Check out the gallery and little video! 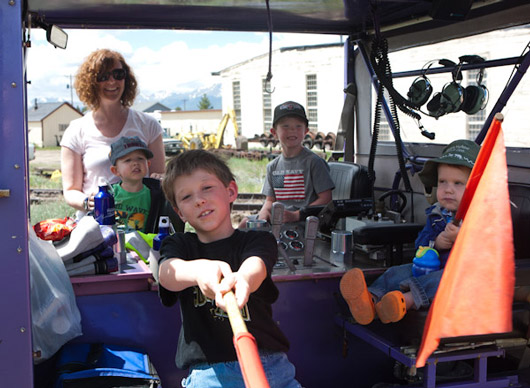 Greetings from the Nack family basement (aka kiddie rave-cave). 🙂 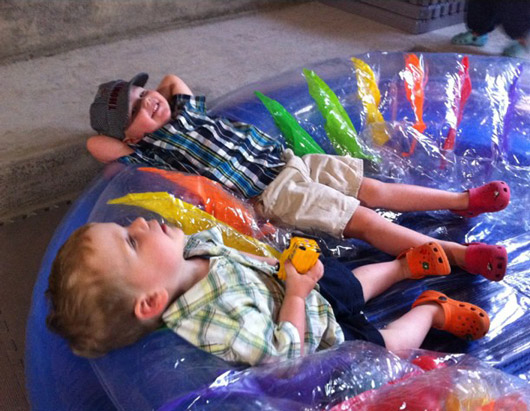 Want to get little dudes excited about enduring long trips in planes, planes, and automobiles? Tell them that making ice cream is on the other side!

Apparently Margot’s dad is rather famous for his homemade mint chocolate chip ice cream, and the lads were more than happy to help him whip up a batch–and to “eat the profits” beforehand! Here’s our little gallery.

Who knew that the Colorado ghost town of St. Elmo was a huge chipmunk mecca? Some handfuls of seeds helped us play Gulliver to the “chippies” (“I’m a chippymunk!” declares Hen). Check it out! 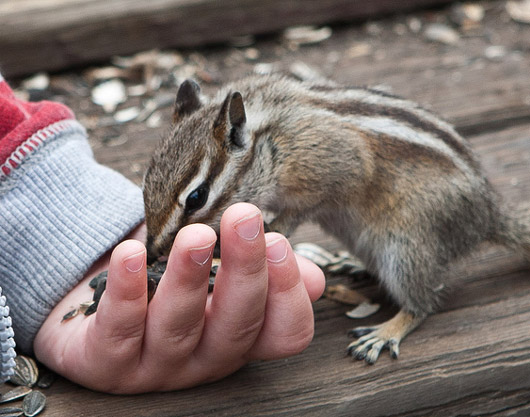 Margot bought the guys little marshall badges plus a couple of stuffed chipmunks. “Look at that bushy-tailed menace!!” exclaimed Finn upon seeing his. (Apparently he picked up that phrase from Fireman Sam.) Now the little “Menaces” accompany our guys around, with one sometimes making trips to my chin (where it becomes a “chennace”–chin menace).

We had a blast taking the boys on the Leadville, Colorado, & Southern Railroad as it climbed high above the Arkansas River valley. Check out our visits to the engine, caboose, & more!

A birthday wouldn’t be complete without singing and (cup)cake, so thanks to nephew Patrick for documenting the proceedings:

We neglected to mention that just before the festivities, Henry had been forcibly awakened from an epic nap (lest he be up all night). That left him pretty lethargic & unsure what to make of all this fuss. (In the previous gallery you can really see the effect of the cupcake sugar hitting his bloodstream!) It’s also funny to observe Finn’s oversight of the candle-blowing operation. He really had to work at not jumping in and doing the honors himself! 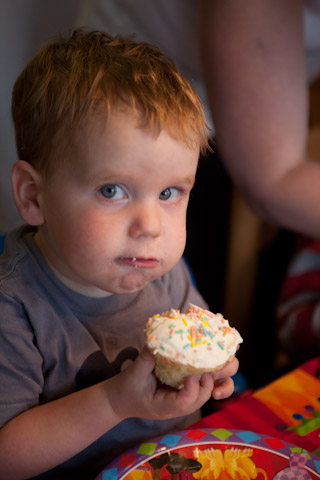 Henry Seamus Nack turned 2 years old today! Since we were flying back to SJ from our weeklong trip to Colorado, we celebrated Henry’s big day on Wednesday in Leadville. His cousins, aunt, and grandparents were there for the festivities–candles, singing, cupcakes, and presents! Here’s a link to the party gallery.

We can hardly believe our little Henry is already two. In many ways, it seems like he’s been with us far longer than a mere 2 years, but in other ways he is still our little bitty guy. It’s been terrific to see his personality bloom this past year, especially when it comes to his ability to use so many words to express himself instead of being thwarted by a lack of vocabulary and constantly seeming frustrated. Although he can be a bit slow to warm up to new acquaintances, once he does, he is a joy to be around–he’s slyly goofy, often breaking into a wry grin when he’s up to something. He’s kind to his big brother, loves all kinds of physical horseplay, and loooooooves his Dad-o. We love it when his blue eyes sparkle and he verbalizes his observations, often asking us questions to help figure things out. Hooray for Henry! We couldn’t love you more, little squirrel! 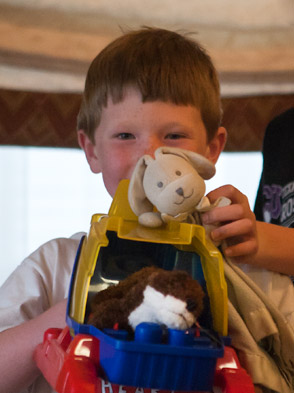 From the Rocky Mountain Dept. of Wildlife:

Bonus animal bit: Today on the train Finn informed me out of the blue, “Dad-O, if a we had a monkey who liked chips, he’d be a chip-monk!” Right on, little guy. 🙂 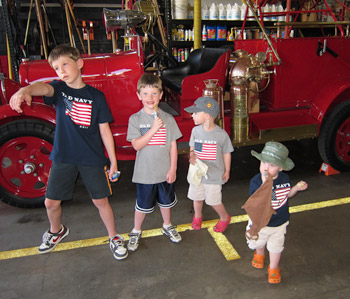 After a smooth journey to Colorado, we arrived in Leadville on Sunday evening. The modes of conveyance have been hits: Finn was so jazzed that “We’re going to fly on a Boeing Constrictor!,” and both guys keep talking about “the rental car” that we’ve dubbed “the eep” (see photo for explanation). I was pretty concerned that the altitude here would ruin their sleep, but happily* I was the only one tossing and turning all night. I keep encouraging the boys to drink plenty of liquids, leading to Finn’s rather sickening mountain hydration plan: “I’ll drink some water [saliva] out of Leo [the lion blankie]’s tail!”

Monday featured Leadville’s charming little Fourth of July parade, followed by a tour of the fire station, free barbecue in an aircraft hangar (“Welcome to North America’s highest airport!”), and backyard s’mores. The cousins are playing together beautifully (so cool to see!), and I’ve captured a gallery showing the proceedings.

Hi, everyone–greetings from 10,000ft (Leadville, CO). I’m typing fast as we’re scrambling around with the guys, having a ball checking out the Independence Day parade, the fire station, free chow at the tiny airport, and more. Despite Henry’s claims on the plane that “I freakin’ out! I like crying, Dad-O!,” both guys were mobile superstars. Here’s just a quick shot of Finny at the airport.

Okay, Henry is climbing the ottoman, preparing to stage dive onto my computer. Bye! 🙂 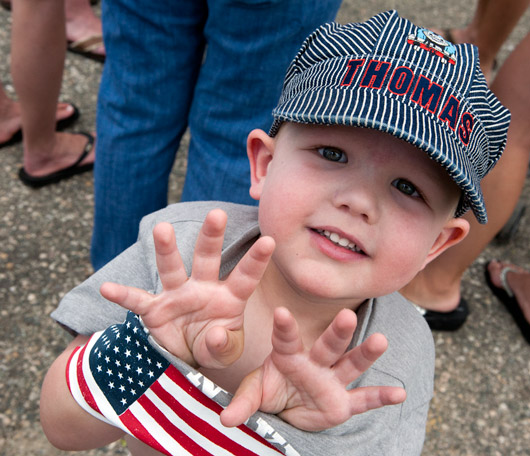 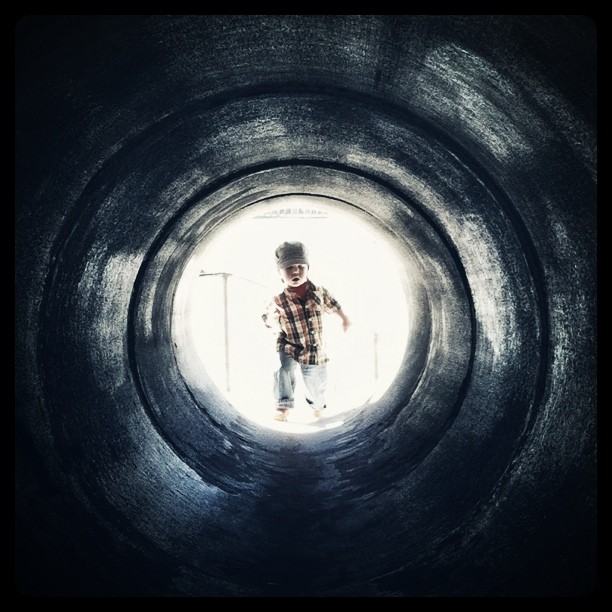