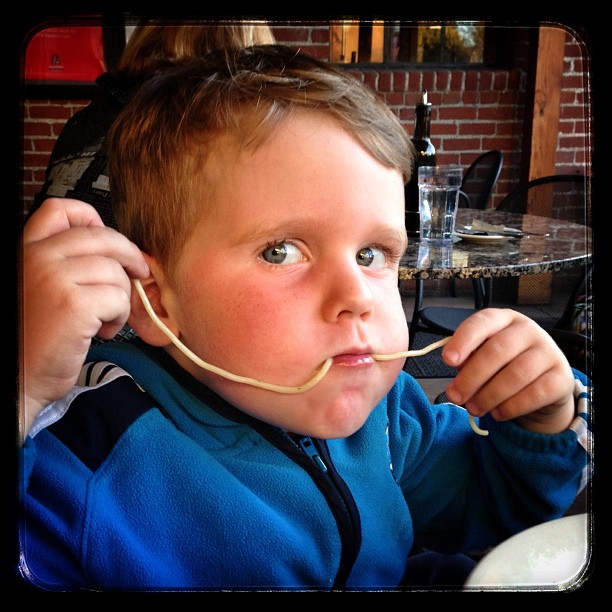 Downside: A blizzard leaves you flightless & stuck in Denver for an extra day.
Upside: Bonus trampoline mayhem with cousins!! 🙂 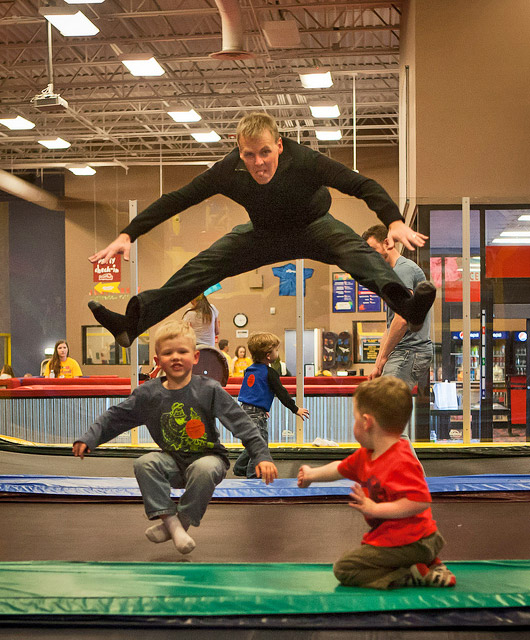 Late last year the boys took a real shine to a video in which Prof. Walter Tschinkel used molten metal to create casts of ant colonies. Now, through the imponderable power of little-kid free association, the name “Walter Tschinkel” popped up in a new ant-related story Finn’s devised.

I suggested to Dr. Tschinkel that Finn’s novel hypothesis that “10 ants equal 1 dog” is largely unproven. We’ll see what he says. 😉

[Update: Well, we didn’t have to wait long. He writes, “Mighty cute kid you got there! And now I have a hypothesis to test—- 10 ants equal 1 dog. Should keep me busy for a while.”] 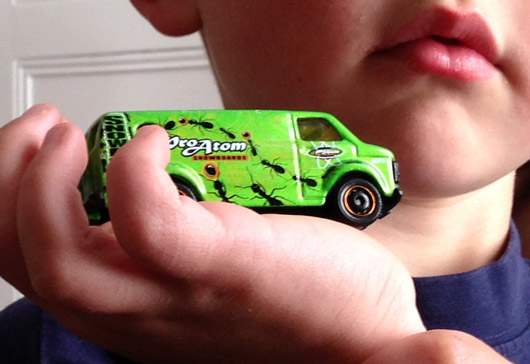 May we introduce our very own Dancing Robot! 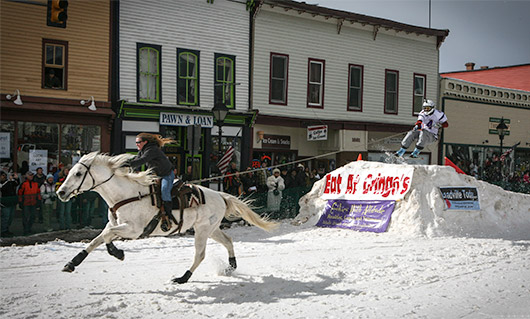 I just stumbled across this little vid from last fall & got a chuckle from it. Finn got really into what he dubbed his “iPod”—a tiny educational computer he’d gotten as a birthday gift from pals Bettie & Quade. For whatever reason he dubbed the songs it played “Chuckbone” and “Sackbone.” Here, without further explanation (which I’d find impossible anyway), are the tunes:

You know what this photo makes me? That’s right, Father Of The Year. 😉

The boys had all kinds of fun digging in the snow, firing snowballs at their cousins, playing “Wampa vs. Mountain Lion,” and more. I got a particular kick out of my young nephew Patrick creeping out from behind a tree, nailing me with snow, and announcing, “I call that one ‘The Oswald.'” I immediately gunned one back at him and declared, “Yeah, and that’s ‘The Jack Ruby.'” Here’s a little gallery of the goings on. 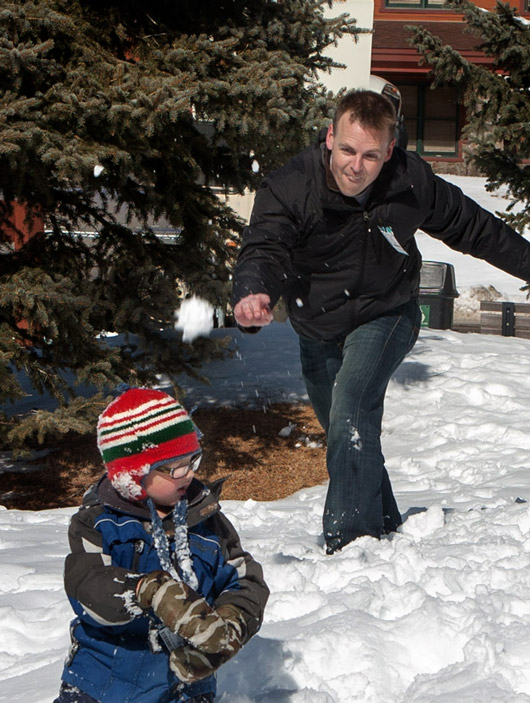 All hail Leonidas, the Puppet King of San Jose. 🙂

Man oh man… sometimes you know that an idea is ridiculous, but you proceed anyway. And sometimes that’s not so bad. 🙂

Last summer Finn spotted—and immediately fell in love with—a particularly gigantic Lego set at the store. That alone is no big deal, and as with most kid-crushes, we expected the infatuation to fade quickly. Not this time, though: For the last eight months or so Finn’s been totally hung up on the Lego Unimog. He’s constantly built crude facsimiles via his other bricks, telling me about how great it’d be if he had the real deal with its stabilizer legs, motorized winch, and more. A few months ago a friend’s mom asked him what he’d like for his birthday, and he dutifully reported, “Well, there’s this really expensive Lego set that’s meant for teenagers…”

So, what to do? I knew it was crazy (and Margot certainly felt that way), but I figured, hey, if a 4-year-old can maintain that level of focus for that long, it’s as if I’d wanted something for 10 years! So, what the heck, we ordered the “‘Mog” and had it sent to Colorado. As you might have seen in the previous gallery, he went totally mental upon receiving it.

Aaaand, that’s where things got tougher. Assembling this 2048-piece monster made me remember a certain acerbic poster: 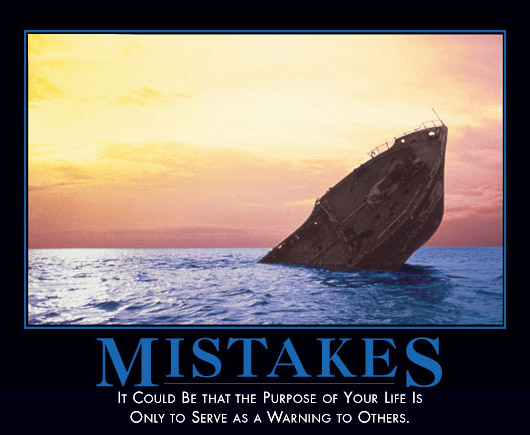 Trying to build the huge vehicle while Finn & Henry danced around the table, constantly babbling & stealing parts (!), was a huge challenge. I mean, for crying out loud, this monster is an honest-to-God, self-propelled 4-wheel-drive truck that features independent suspension, a working differential gear, an elaborate pneumatic power system, and a screw of Archimedes! I started describing my status as “Unimugged,” and what I thought would be a father/son bonding experience kind of turned into a father/son/mother/brother/psychiatrist experience. Okay, leave off that last part, and give Margot huge credit for swooping in, helping me debug my handiwork, and building the big arm assembly. Without her I’d still be in Leadville, rocking back and forth, wallowing in my own crapulence!

But all’s well that ends well, at least so far. (We still have to somehow get this fragile contraption home!) Henry keeps claiming the ‘Mog’s a low rider because of the suspension, and Finn’s devised an elaborate story about a driver named Duck who fishes ducks out of a pond using the arm, then eats them. Here’s a gallery showing the finished piece.

In the end the whole thing felt like a metaphor for parenting: Insane, unbearable, and totally worth it.

Oh, and Henry, if you’re reading this: Getting a giant Technic fire engine for your birthday in July is a terrible, terrible idea! ;-p 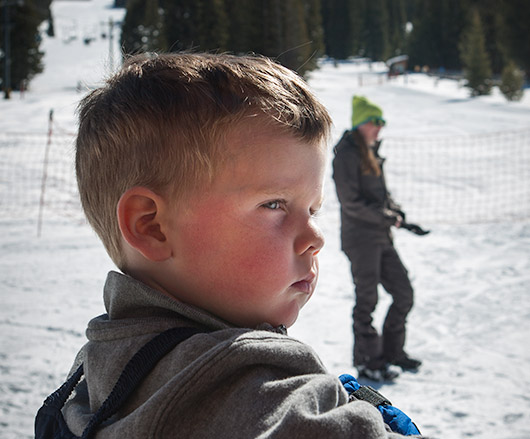 Yesterday the boys cashed in their Christmas presents from Grandma and Grandpa Liggett – ski lessons and ski rental at Ski Cooper, just a few miles down the road. Thanks to some hand-me-down helmets and goggles from their cousins, and some strategic thrift-shopping for bibs and mittens by their Auntie Laura, the guys were all set!

Ski Cooper was the training site for the 10th Mountain Division in World War II. Because of its high altitude and hundreds of inches of snow per year, it was the perfect training ground for the mountaineering troops. Now it’s a public ski resort, but it’s a lot smaller and lower-key than the big boys down the road like Breckenridge, Copper Mountain, and Keystone. It is a great place for beginners because there’s plenty of room to go slow and figure out what you’re doing without the threat of being mowed down by expert skiiers (they ski in a separate, faster part of the resort!).

The guys each got a 1-hour private lesson. The instructors were terrific – two college-age girls named Coco and Corinna. They were great with the guys – very patient and friendly. Little Henry took to skiing right away! He learned how to snowplow and “emergency stop” (a.k.a. tip over on your side), and really got the hang of skiing smoothly down the bunny slope. He looked like a little ski pro in his bibs, helmet, and goggles. Finny was having a rough day and wasn’t very into the actual skiing lesson. He liked getting fitted for boots and skis, but once he was on the slope, there was a lot of collapsing in frustration, drama, and trying to talk his way out of the lesson. He did manage to come down the bunny slope a couple times, and I think he actually understood how to snowplow but just wasn’t in the mood to cooperate.

We definitely want to visit Ski Cooper again – next time Mom-o and Dad-o will hit the slopes with the dudes! Here’s a little gallery of the morning’s proceedings.

[Side bonus for panda-loving Henry: The kids got to be part of the “Panda Patrol”! –J.] 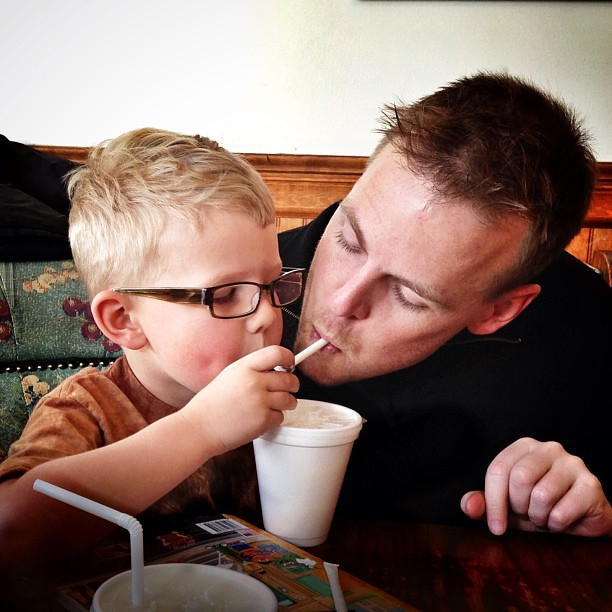 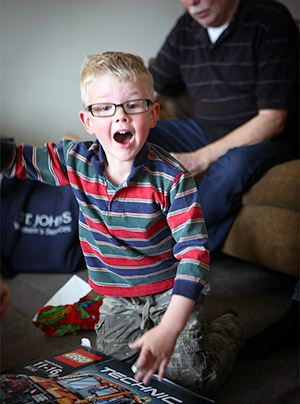 Man, I’m too tired from today’s festivities (and the 10,000ft. altitude) to compose anything clever, so I’ll let these videos tell the story. 🙂

Mile-high greetings! After a fog-delayed flight (during which the boys behaved wonderfully; thanks, iPad-genie!), the whole fam arrived safely in Denver today. We got to visit Grandma & Grandpa Liggett’s apartment, bean each other with snowballs, and discover the burning of snow-caked hands.

The lads and Margot are sleeping now, I pray, but at any moment I could be called back to the room. Tomorrow we ring in Finn’s Big 5 with build-your-own “birthday waffles” courtesy of the Hampton Inn (something the boys have discussed for weeks!), then head towards Leadville for snow-tubing and more. We can’t wait! 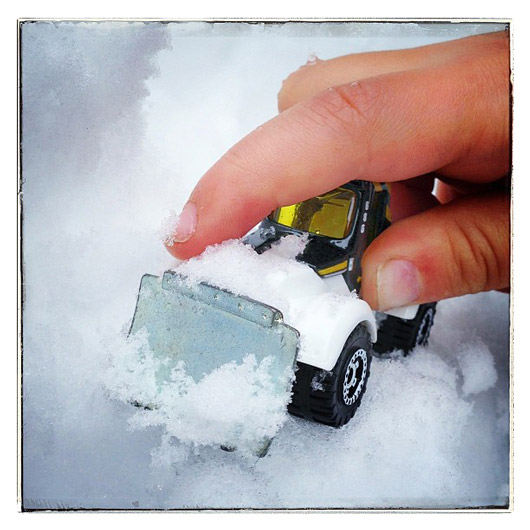