From today’s visit to the Santa Cruz butterfly sanctuary, pure Goonie-being-Goonie, as unprompted as it is bizarre and endearing :-): 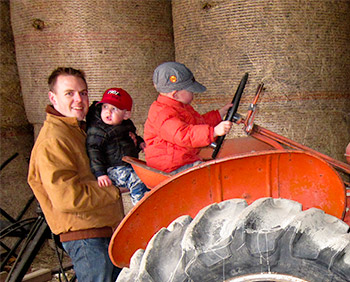 What–if this is even possible–is better than playing with a fleet of toy farm vehicles? How about playing with the real vehicles?

On Sunday Uncle Ted escorted us to visit his friend Tommy Moser’s farm. Our guys were delighted to explore a couple of big tractors (turns out Finn’s an Allis-Chalmers man) plus a truly massive combine. Our visit to the chicken coop yielded a bucket of eggs we’ve been enjoying every day since, and Henry got a little freaked out regarding “mad cows” (as in “angry,” not as in “Bovine spongiform encephalopathy”!).

Here’s a gallery of photos, plus a video showing the egg-grabbing good times: 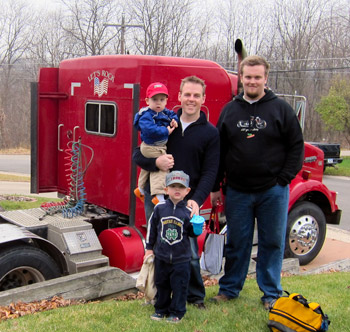 Breaker breaker 1-9, this here’s Rubber Duck and… well, I’ve already exhausted about 90% of my CB/trucker lingo. In any case, we really put the “N” in “TNT” (Ted Nack Trucking) yesterday: the boys & I spent the day on Uncle Ted’s big rig, traveling through Iowa to collect a trailer & then heading on to “The World’s Largest Truck Stop.” Here’s a little gallery of photos. I’ve also boiled our 7-hour adventure down to two minutes:

As a little bonus, here’s how Henry & I passed a few miles on Uncle Ted’s sleeper. I’d apologize for the jiggly camera work, but even this doesn’t capture quite how loud & shaky it is inside a truck!

Greetings from “Big G”! We arrived in Galena on Saturday after a journey on which the boys did great. (Well, check that: on the plane I pretended to call Grandpa Nack and tell him that the boys hadn’t fussed at all, but Henry interrupted: “I did some fussing!” Not much, though.)

We’ve had a ball so far, meeting baby cousin Jenna, visiting Tommy Moser’s farm (much more on that soon), and especially playing with Uncle Ted’s old farm toys. The lads are in seventh heaven learning about hay balers, manure spreaders, and more. (Parental bonus: I’ve never seen them so self-entertaining! They keep making a beeline to the sun porch–er, “crop area”–and barely note whether we’re there.) Here’s a brief glimpse of the action: 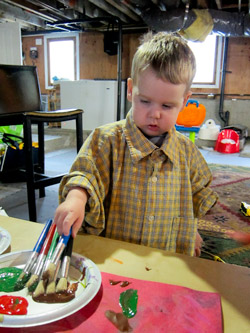 Let us hereby turn our basement rec room into a wreck room! 🙂

Margot kitted out the guys with a full assortment of paints, glue, cotton balls, pipe cleaners, and other goodies this past weekend, and they’ve been doing some messy “basementing” ever since. Check out a few portraits of the artists as very young men.

The sight of our lads gleefully engaging in low-speed chases around the kitchen island makes me think of this old Far Side cartoon. (Every so often I play the role of the hunted butterball. ;-)) 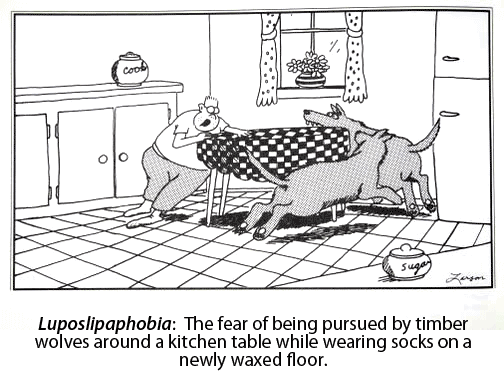 Thanks to our buddy Matthew for supplying some stick-on mayhem! (Henry was napping but got into the spirit later via some forks.) 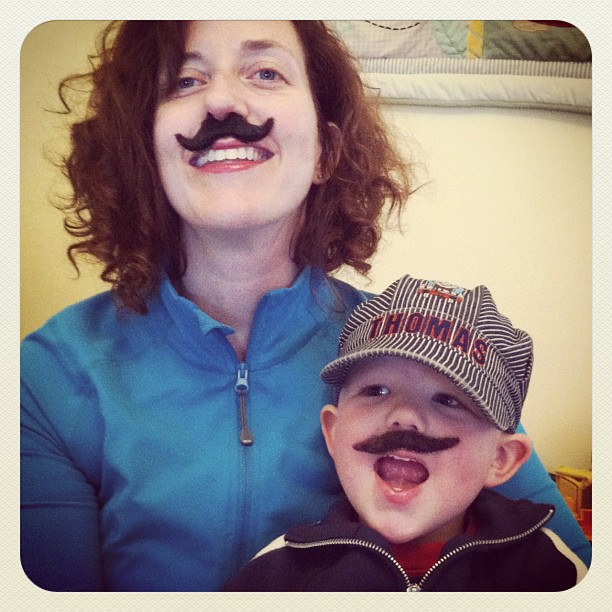 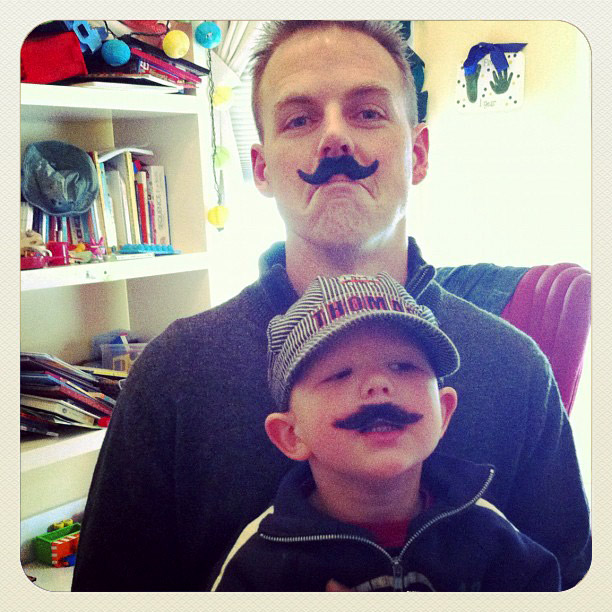 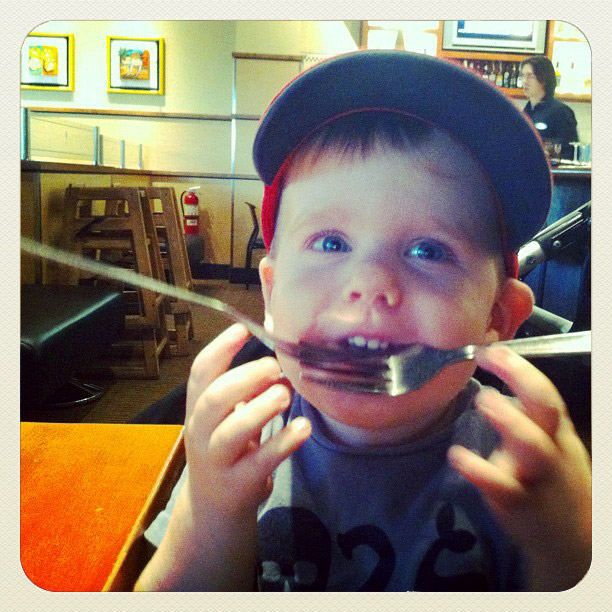 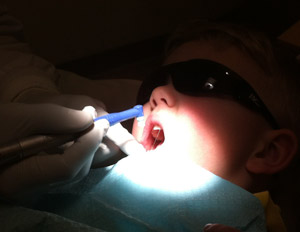 Know many dentists where your child would be greeted with a family bear hug from the dentist and his wife? Me neither–but I’m happy to know one. 🙂

Yesterday Finn accompanied me to Dr. Vandi’s office for his first official checkup & cleaning. You might remember that the Doc has been a figure of some intrigue for ages: at 18 months Finn liked to pretend to visit Dr. Vandi, and a year ago he got big mileage from playing with dentist’s masks sent by the Vandis. The boys are equally famous around the office, with Mrs. Vandi following their adventures via the blog & Facebook.

Long story short, Finn nailed the visit! He was a champ about getting his teeth X-rayed, biting down as the camera whirled past. He was even a little annoyed with my explanations: “I know it’s an X-ray, Dad-O. It’s like the Curious George story, where George swallowed a puzzle piece…” Finn (and Leo) particularly liked getting a tour of dental implements from hygienist Charles (who, it turns out, hails from a country where real lions live in the forest; hat tip to Ghana!)

Check out our little gallery, plus a couple of clips of our boy in action. Now, here’s hoping Henry stays cool & calm (sans chocolate raisin) during his visit tomorrow! 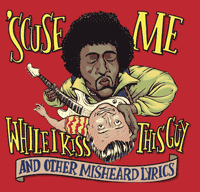 A “mondegreen” is a misheard lyric or phrase–for example, Jimi Hendrix wailing “‘Scuse me while I kiss this guy” (instead of “kiss the sky”).  Small children are of course masters of this art, and here are some recent entries:

G-Man isn’t quite to Finn’s level, of course, but he’s getting there: This weekend he overheard me telling my friend Matthew about the window glass, and he asked, “Is there a drink in the glass?” 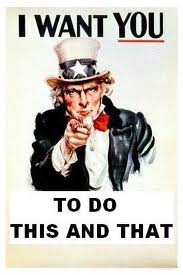 …and I do mean demands!

Finny has entered the wonderful stage of making earnest, repetitive, targeted demands. And, since nothing gets by Mr. Henry, he is definitely aping his brother’s less-than-polite tactics for getting what he wants. It’s as if we haven’t been reminding them to “say please, say thank you” repeatedly day after day for years! Some examples (and believe me, this is a sharply abridged list!):

“I want more milk! I want cinnamon toast! I don’t want toast, I want cereal! I want to watch Thomas! Mom-o, stop talking to me! Henry, stop playing with my trucks!”

“I want truck videos! I want my trucks! I need my two Ollies! I waaaaaaant iiiiiiit! I dropped my _____, get it for me! Wipe my hands off! ” And, immediately upon waking the day after Halloween: “I want candy!”

It just goes on and on. I imagine being on the receiving end of the constant demands must feel somewhat like an old-school stockbroker shouting and signaling futilely in the middle of the insanely crowded trading floor. We stand firm and don’t move a muscle until there’s a “please” added to turn the demand into a request!

[I think Finn might actually need conflict right now, for whatever reason. He can be what seems like deliberately crazy, trying to get a rise out of us. For example, after trick or treating the other night, while I was putting Henry down Finn silently helped himself to a huge pile of M&M’s. I wasn’t pleased, but I didn’t make a big deal of it, and I said he could have more in the morning. “You said I can’t have any in the morning!!” he wailed, over and over, despite my protests. It was so irrational, so arbitrary-seeming, that I figured he must somehow need the battle. (Well, that and his poor tired bod was undergoing an epic sugar crash!) –J.] 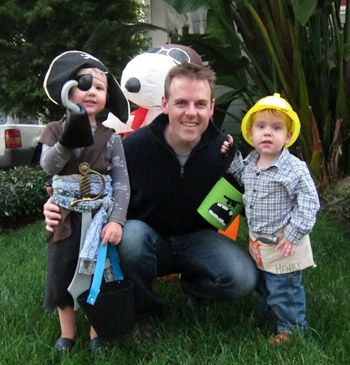 Another year, another successful candy haul! Swashbuckling Blackbeard & Bob the Builder looked great in their duds, and of course they’re really gotten into craving the sweets. In this little gallery, you can see Henry even (jokingly) trying to eat a candy wrapper!

Following trick-or-treating, and while Margot dispensed candy to 400+ (!) kids, I took the job of winding down our two sugar-addled amigos. After they caught me humming Michael Jackson’s “Thriller,” they demanded to hear the real song, after which I hipped them to a video of 1500 Filipino prisoners doing the Thriller dance. I think it’s safe to say they enjoyed it:

(Apparently I went as Scooby Doo for Halloween, given my goofy giggling during this clip. ;-))

Another Halloween has come and gone, so before it’s too far gone, here are a couple of pics of the guys from preschool yesterday. They got to wear their costumes and have a little parade. John and I took them out for trick-or-treating in the evening, and they both absolutely loved it! Finny asked if he could put his costume back on today because it would be Halloween again, and the first words out of Henry’s mouth upon waking this morning were “I want candy!” Uh oh! 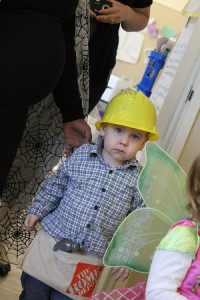 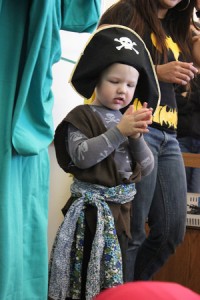