Henry Nack: *Not* a fan of having his head fooled with. He’s a pain at hair-washing time, and he can put up a real stink at the barber shop. Yesterday he was in rare (as in, terrible) form there, but behold the transformative power of a lollipop! Can you believe this is the same kid, in photos separated by no more than 10 minutes? 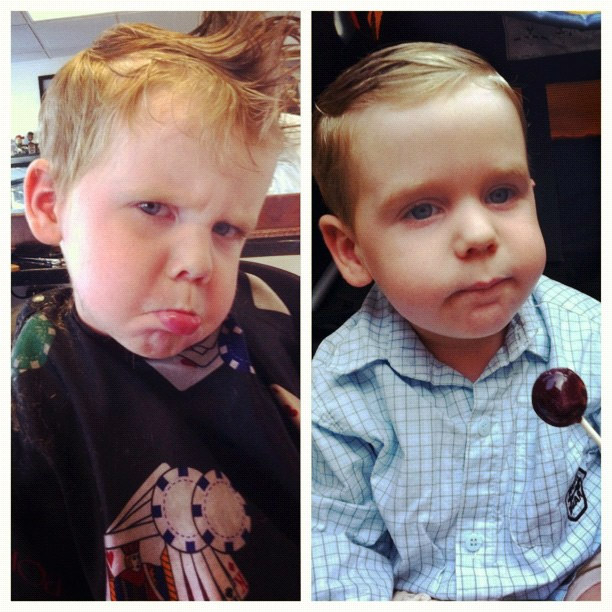 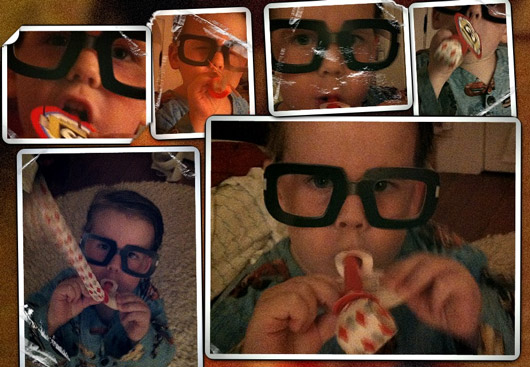 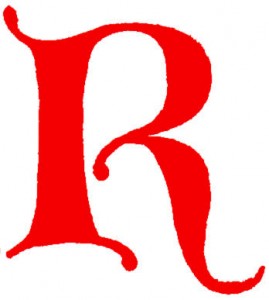 Finny is our chitty-chatty, super-verbal guy. He loves narrating the adventures of his vehicles and toys, and he’s always happy to meet new folks and fill them in on the important details of his life…like “Hi, I’m Finny. And this is my brother Henry. I’m four, and he’s three. My favorite colors are red, yellow, green, silver, and orange…”

The noticeable thing about all this chatter is that Finny’s always had a hard time correctly pronouncing his R’s. They come out very soft – often sounding like W’s, which is totally common among kids under 5. We’re so used to it, we don’t even really hear it when he says things like “Henwy” or “cahws” (cars). Of course other folks do, which has made us wonder if it’s something that will resolve itself or if we’ll need to take him to speech therapy to get it sorted out.

The great news is, I think he’s sorting it out for himself. And I think going to bilingual Spanish preschool, with all its rolling R’s, has really helped his pronunciation! In the past few weeks, I have noticed more and more hard R’s creeping into his words. He’s actually working so hard he over-pronounces them, and the R’s are comically noticeable since he’s really growling out those R’s! CaRRRRs, HenREE, cARRRpet, TRiscuits, and so on.

I’m sure at some point, the new correctly-pronounced R’s will sound totally normal, but for now, it sounds so unfamiliar to my ear, it’s like listening to someone with a British accent try to sound American!

[Great post, hon. I think it’s time we got Finny his very own keyboard, don’t you? See below.
— Love, Dad-O-in-Seattle (who enjoys getting corrected on his Spanish pronunciation by El Finnstero. 🙂 ) –J.] 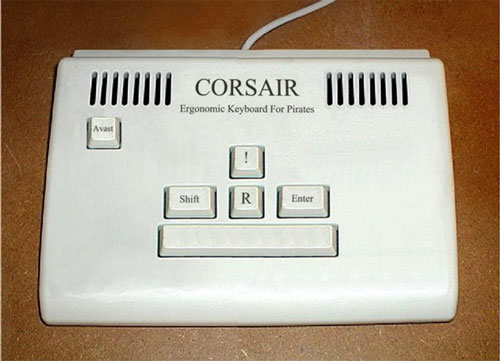 The lads seriously enjoy reading the Lego-themed books that Grandma Nack has been sending their way. (In fact, they frequently go around in their “Lego crook” identities of “Hank” & “Butch,” making as sinister & raspy a laugh as the under-5 set can.) Check ’em out: 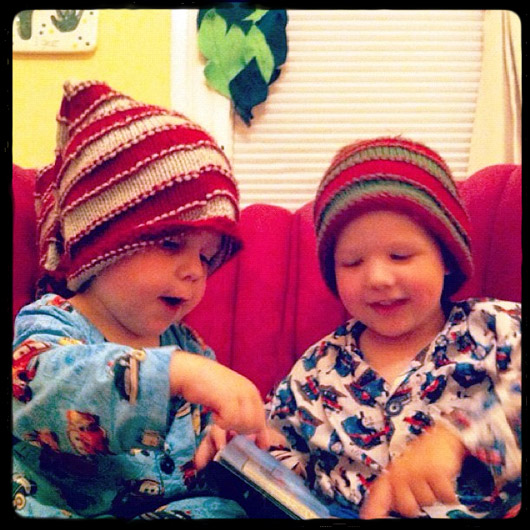 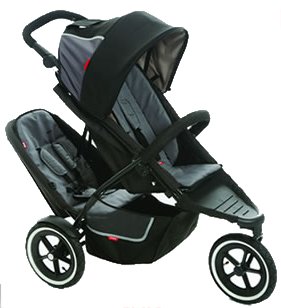 Apropos of nothing, Happy Friday. 🙂 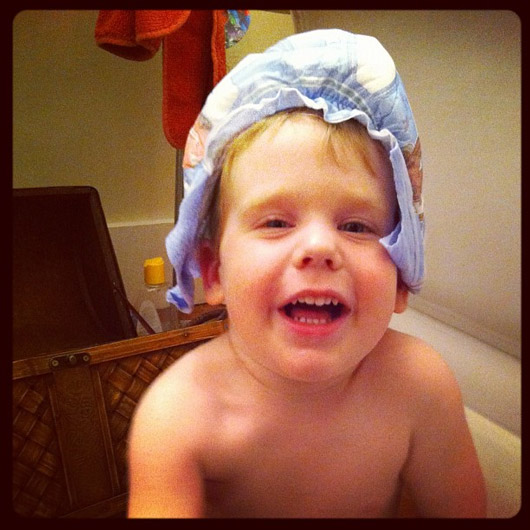 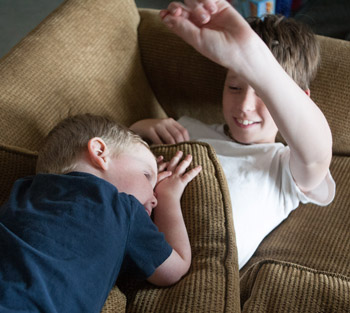 Back in Leadville this summer, I watched our delighted boys bury their cousin Patrick in pillows, turning him into a “sandwich.” I typed away as the guys played, thinking I’d flesh out these bare notes, but somehow I never got around to posting the photos or story. Now I’m left with just a few semi-random bits plus a rather fun gallery of pics. Enjoy. 🙂 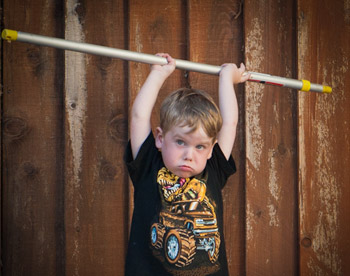 Last weekend we took the boys to the annual Scottish Highland Gathering and Games in Pleasanton, so they could witness the majesty of strong men in kilts, bagpiping, sheep dog trials, “hairy coos”, and haggis. We all had a ball.

As you’ll see from the gallery, there was a lot going on. In addition to the “oreo” cows, we got to see birds of prey like Kayleigh and (li’l) Bob the owls. Kayleigh was an enormous Asian hunting owl, while Bob was just a wee screech owl. We watched the sheep dog trials and met the sheep, and saw some beautiful antique British racing cars, one of which looked very much like Sir Topham Hatt’s. There was also a kids’ area with games and face painting. The lads even got to practice the art of pitching toy sheep stomachs (haggis vessels) into a cauldron!

Everyone was especially enthusiastic about the caber toss, which features enormous, strapping, kilt-clad lads and lasses hoisting what’s essentially a telephone pole up-and-end-over-end before it hits the ground with a loud “thunk!”. Needless to say, the guys wanted to practice their own caber-tossing skills at home with an appropriately sized prop, an aluminum extendable paint-roller pole.

After all that fun, combined with gorging on carnival food and ice cream, the guys completely crashed in the car on the way home. I thought Finny might never wake up! 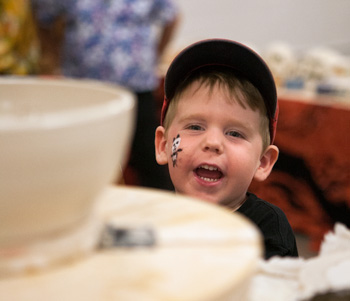 At this weekend’s Highland Games (a celebration of Celtic culture, especially through throwing heavy objects), our guys were smitten with a pottery-making demonstration from a kindly older lady who says she’s been teaching her art for 40 years. In this little gallery you can see their rather intense focus, and in the video below (in which—fair warning—not much happens), you can see the demo in action: