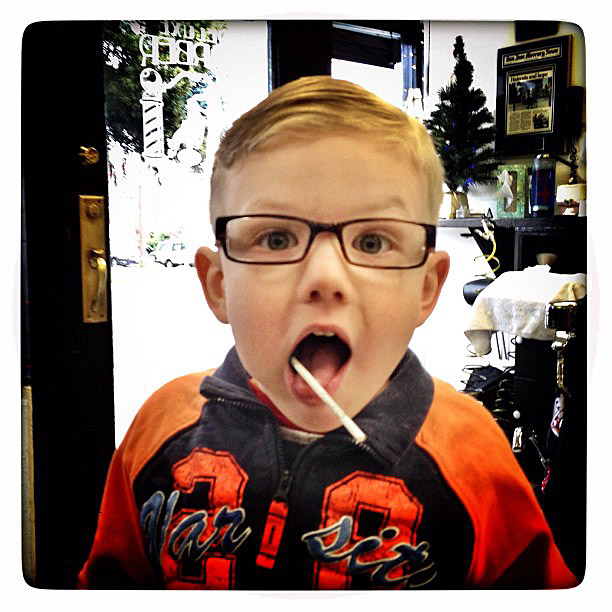 Finny had an unexpected visit to Dr. Feldman, our optometrist, last week. Recently, we’d noticed that his right eye had started to turn too far inward when he was focusing on near objects – like while he was drawing, or watching videos, or playing with Legos. He’d been to Feldman for a check-up in the spring, and everything checked out fine, so we thought it’d be a good idea to have him checked again to figure out what was going on with the eye.

Turns out Finny is farsighted, and after a few quick tests that indicated the issue, Dr. Feldman performed a more extensive exam to confirm it. Finny’s brain and eyes were working really hard to compensate for his inability to focus at certain distances, which is what was causing his eye to turn inward. The doc told me that Finny should be fitted with glasses, and he’d need to wear them pretty much full-time – the only exception being outdoor physical play where he is not focusing on near objects.

So, Finny tried on several little pairs of frames, and we picked the ones that looked and fit the best (and ordered two pair since one will inevitably meet a destructive end at the hands of a 4-year-old). A couple of days later, we were back at Feldman’s to get the completed specs fitted to Finny’s face, and then he was off to the races. Ever since we picked them up, he’s been super-cooperative about wearing them, and trying to remember to put them into their little case at the end of the day. He’s working on taking them on and off without stretching or torquing the frames, as well as how to clean them with his little lens cloth. I think his easygoing nature is helping make the transition pretty easy, and I also think the specs make enough difference in his vision that he can’t argue with the fact that he’s seeing more clearly. We think our bug guy looks pretty cute in his new frames, and we’re happy we got his vision sorted out!

An interesting side effect of Finny getting glasses is that he and I have established a noticeably tighter bond with each other. I think because I wear glasses, and I was working really hard to make sure he was comfortable (and even excited) about getting his own pair, he’s been especially affectionate toward me. I’m hearing lots more frequent “I love you, Mom-o”s, and he’s even bestowed one of his favorite stuffed lions on me to cuddle with while I sleep. It’s very sweet, and I’ll take as much as I can get! 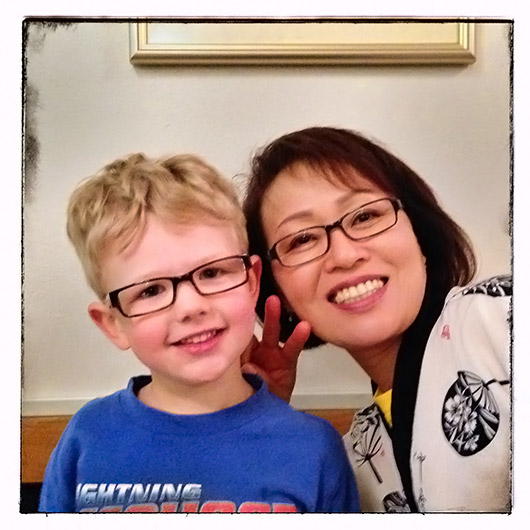 One reply on “Seeing Clearly Now”

I didn’t think it was possible for Finn to get any cuter, but I’ve got a thing for guys in specs. Sad to hear he needs them, glad to hear you caught the problem early.