Yesterday was a big day for Mr. Finnegan Nack – he mastered the art of two-wheeling!

Last weekend, after we got his flat tire fixed at the bike shop, he was eyeing a new “Mike’s Bikes” water bottle, and a new LED tail light for his bike. I told him that if he learned how to ride without his training wheels, he could get the bottle and light. Boy – had I known how well a little incentive was going to work, I would’ve done this ages ago!

We started practicing without his training wheels last weekend before I left for Germany, and spent about an hour going up and down the driveway with Finn pedaling and me holding him upright by the bike seat and handlebars. We had our second and final round of practice yesterday morning at the park down the street – which is perfectly laid out for bike practice! It’s essentially a big circular sidewalk around a playground. Finn rode to the park with the training wheels, and then when we got to the park, we took them off and started practicing.

I could tell it wasn’t going to take long, because I wasn’t really holding on to the seat very hard anyway. I was mainly acting as moral support – coaching a worried, semi-weeping Finny by running alongside and chanting a lot of “I think I can I think I can” (while he thought I was holding the seat). Of course he had a few spills and run-ins with the play equipment, but after catching his breath and wiping off tears, he was back in the saddle. I told Finny that he had to believe that he could do it – because if he didn’t believe in himself, it was going to be really hard to do it. He did not like that messaging, but it must’ve gotten through – because once he forgot to be worried and just focus on pedaling and staying upright, he did great!

The goal we set for earning the water bottle and tail light was two complete laps around the park without stopping. In less than an hour, our boy nailed it! We celebrated with lots of cheering and hugging, and Finny rode his bike all the way home – with many stops and starts, but without the training wheels! (You can see his happy yet exhausted-and-weepy expression in the photo gallery). We then proceeded to go to Manley’s for celebratory doughnuts before a stop at the bikeshop to pick out his prizes. 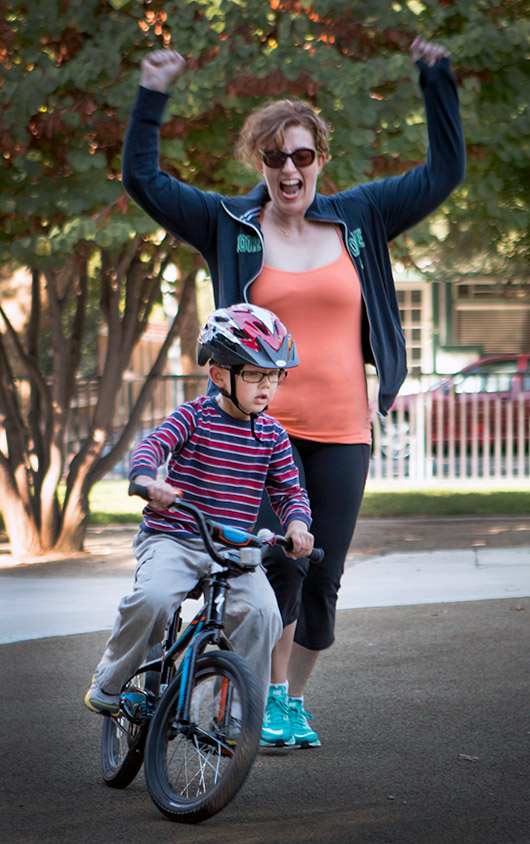 One reply on “Two-Wheelin’ Feelin’!”