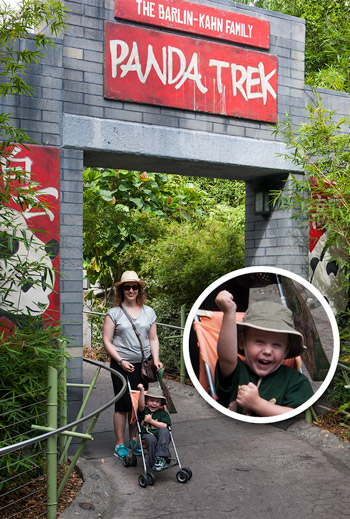 The last leg of our summer vacation in Southern California was a trip to the San Diego Zoo. We arrived bright and early in the morning, with strollers, camera, and snacks in tow. We had already discussed the various animal exhibits at the zoo with the boys, and unsurprisingly, our man Henry decided we should see the panda bears first. So, off we went to Panda Canyon. Henry could barely contain himself! We got to see two panda brothers eating their bamboo breakfast, and we heard the zookeeper mention that there was a third, one-year-old panda lounging at the top of a pine tree. That little guy was only visible from the sky gondolas, so after we spent some close-up time with the big guys, we hit the sky ride to view the little one from above.

We spent the rest of the day wandering around the beautiful zoo, checking out almost all of the other exhibits (minus the reptile house, which none of us were too excited about). We definitely got our fill of elephants, big cats, birds, hippos, giraffes, koala bears, and native Californian species (including the human spectators!). Here’s a gallery from our day.