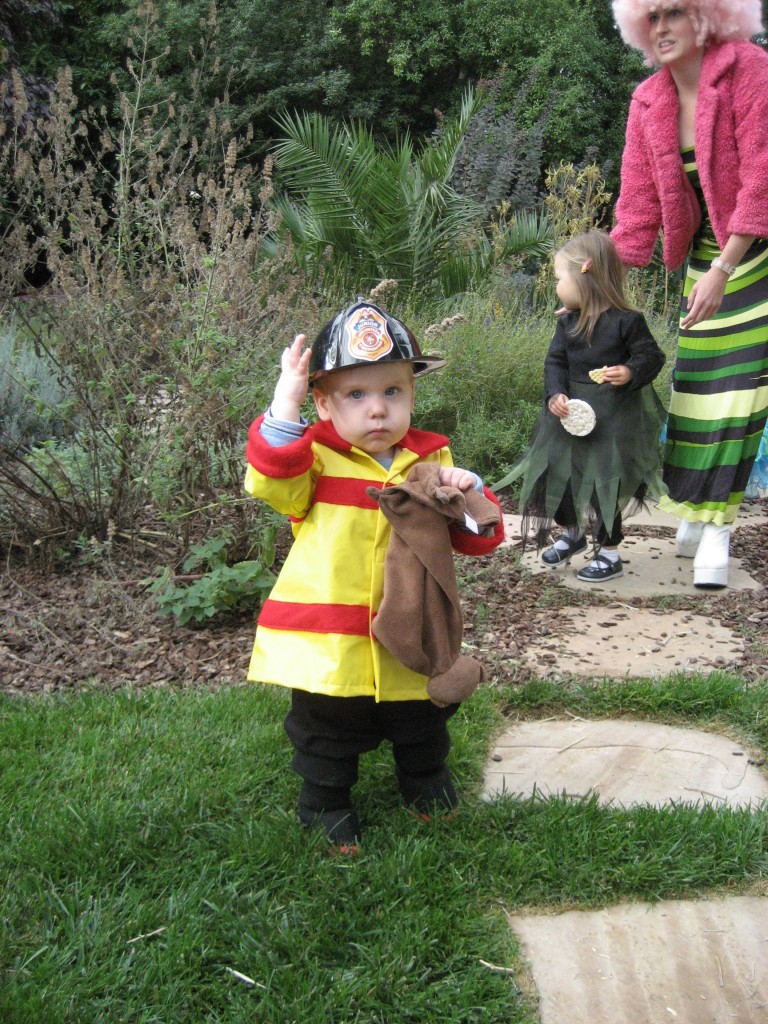 Here’s a fun shot of our G-man dressed up in his Halloween costume. He makes a handsome little fireman, doesn’t he? 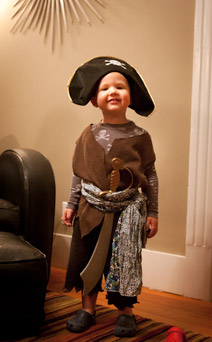 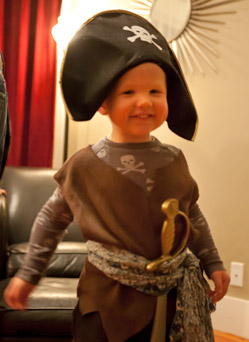 Finny is trying really hard to be a “bad pirate” but darn it, he’s too cute to be a believable scallywag!  Especially when “Arrrr!” is pronounced “Owww!”  (click each photo for a larger version)

[Update from playgroup: Mom Ariel Kurtze reports, “”We had a very cute pirate at playgroup this morning! And a very sharing one too, he let Sabrina play with his scimitar :)” –J.]

Want to get a team of toddlers eating out of the palm of your hand? (Figuratively, I mean; they’re all too willing to do it literally.) Get ’em some Mardi Gras beads!

Finn, and Henry in particular, were so enamored of little Harper Hogarty’s bead collection that I started calling him “Jacob Marley” after the chain-dragging ghost in A Christmas Carol. Check it out: 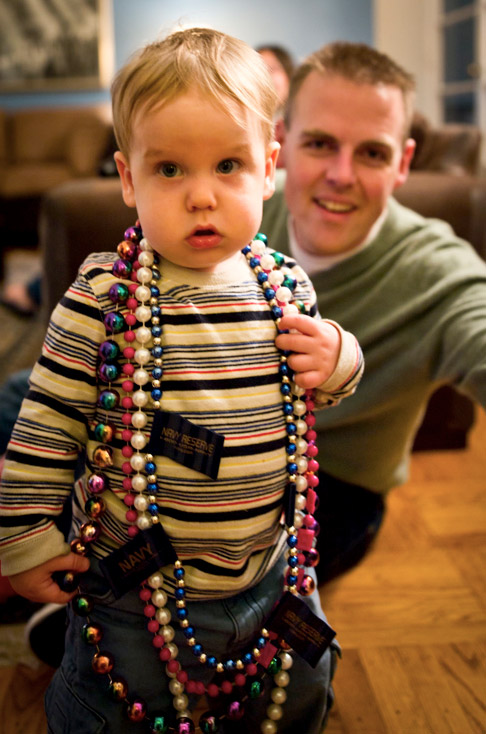 Unfortunately I wasn’t able to capture shots of the three tots running a racetrack pattern, with Finn popping out to startle the little ones (“Surprise!”) and Henry trying to keep up (“Prise!”). It was high-speed hilarity. [Photo courtesy of Harper’s dad, “Papa Hog” Tom]

Later today we’re off to see our friends Tom and Sarah, their daughter Harper (a few months older than Henry), and their own little “El Segundo” who remains in utero. Wanting to jog Finn’s memory about Tom, I said, “You know, he’s the guy with that big beard” (see below). Finny replied, “Is the baby gonna pop out with a little beard?” We shall see, buddy! 🙂 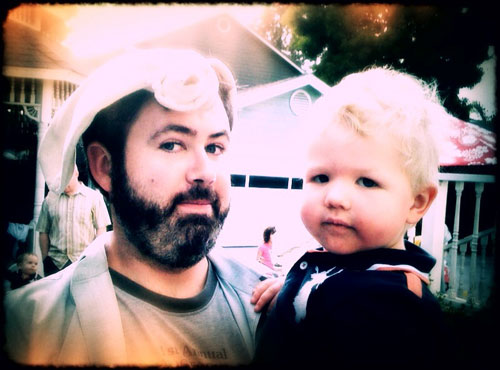 Yesterday morning, the boys were enjoying some sliced banana when Finn grabbed a little toy construction cone, flipped it over, and inserted a banana wedge. “Now it’s an ice cream cone!” he proudly declared. He even made one for his little bro. 🙂 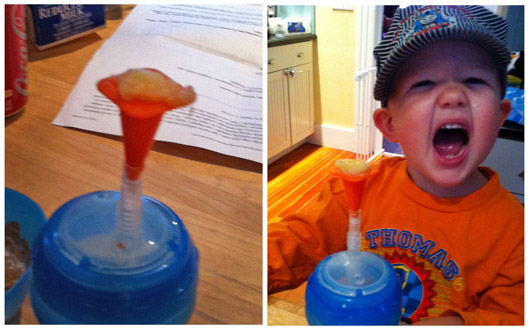 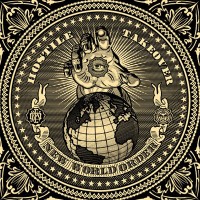 The constant brotherly grappling over toys has officially begun. Now that Henry’s mobile, more coordinated, and can talk a little bit, he is making the most of these new skills by trying to wrestle toys away from his big bro, or destroying Finny’s works-in-progress. To wit, every time Finny’s building something with his legos, or putting together a puzzle, Henry’s right there in Demolition Man mode, doing his best to tear everything apart. To his credit, Finny gives as good as he gets. Clearly Finny’s far too old for Henry’s “baby” toys, and tends to take over the button-pressing, horn honking, shaking, and stacking that G-Man’s still trying to coordinate.

So we’ve got big bro steamrolling little bro, and little bro destroying big bro’s creations. Then the whining and grabbing kick in. But not for long–luckily they’re both fairly receptive to parental intervention and the idea of waiting turns and/or sharing. The one thing they both agree on is looking at books together and watching Wallace and Gromit shorts on the iPad. Honestly, though, the boys tend to play very well together, and usually Henry’s off doing something on his own without a lot of pestering from Finny. We both enjoy watching them hang out and enjoy each other’s company. 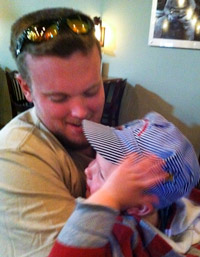 It was great to reintroduce Finn to his big Uncle Ted (given that I doubt he remembers their first meeting), and Ted had good fun playing the role of “Uncle Troll.” Check out a few pics (HTML) and a video: 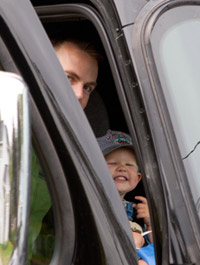 Okay, not quite, but we did get a fun ride with Uncle Ted in his bobtail rig, heading from “Big G” through Scales Mound, on our way up to the truck lot in Shullsburg. We all had a great time, and maybe in the future we can get Ted a bumper sticker that says, “LEO is My Co-Pilot.”

Here’s our little gallery (HTML) plus a short video:

Heh heh–perhaps, according to the NY Times, Henry’s perpetual brow-knitting is just a sign that he’s interested in things:

“‘When babies are interested in something, they tend to do a furrowed brow,’ he continued; parents should understand that babble may be ‘an acoustic version of furrowing one’s brow.'” 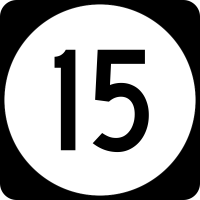 Henry hit the 15-month mark on Saturday, which he celebrated by smearing chocolate chip cookies all over his face. Not to worry, though, he ingested plenty of chocolate, too. (Like father like son :D)

We went to visit Dr. S. this morning for his 15-month checkup, and here are the stats: 26 lbs. 3 oz, 31.5 inches tall, 49 cm. head circumference. In a nutshell, he’s a bit on the short side, but he’s holding his own when it comes to his weight (to wit, the aforementioned cookies) and cranium size! The doc was impressed with both his mobility and his chattiness. We estimate that the G-man’s got about 50 words under his belt, which wowed the doctor. I think she may have forgotten how many words Finny had at the same age! She got to hear him talking about his two favorite things: buses (a toy we brought) and doggies, which is what Henry was calling the dinosaur wall decals.

He was a total champ when it came to his vaccinations and only squawked for a couple seconds afterwards. He’s not a huge fan of being poked and prodded by the doc, but cooled out once I held him in my lap so while she listened with the stethoscope and looked into his ears. 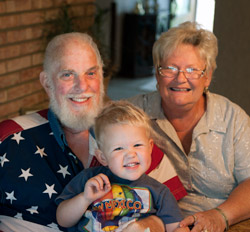 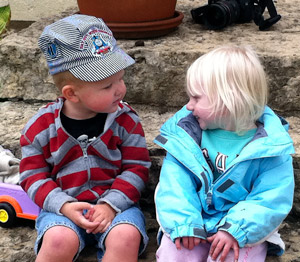 It’s really cool to see the Finnster start interacting more with other kids, and during our time in Galena, he had a ball racing cars with little neighbor girl Isabella. Packing his lion-buddy into the back of a truck, he proudly (and sort of inexplicably) declared, “This is called, ‘Leo the M&M’!” From there they were off to the races:

(Click any of the images for a larger version.)

Our little Henry is growing and changing so fast these days! John and I have been talking about how he’s entering the “Henry 2.0” phase–walking, talking, playing independently, goofing around with his brother, and sporting quite a little personality. He’s really coming into his own, and we couldn’t be more thrilled.

Verbally, G-man is learning to say a few new words a day. Recently he’s added the following to his growing vocabulary: cheese, gato, milk, agua, “do that”, this, brother, shoes, nose, toes, doggie, block, and  “toot toot”. He’s also getting quite comfortable ambling about the house on his own, and we often find him busying himself with his toys, or tours of the pantry, or a quick stroll behind the living room bookshelf. He’s working on his fork- and spoon-handling skills, too. These days we need a fork for Henry to wield and “practice” with while one of us feeds him with another fork.

He loves to do “turtleando” with his brother on the big bed. (This entails pointing to the turtle on the wall hanging and then getting tossed around on the bed by Dad-o while laughing hysterically.) He’s also started taking to several of his books and pays rapt attention while we read, especially if there are sound effects involved! He’s a big fan of fire engines and trains, and loves to say “oo oo ooh!” when he sees the monkey in his peek-a-boo book.  All in all he’s becoming lots more fun and interesting to be around, and Finny seems to be enjoying his little bro a lot more now that he’s more interactive.

[As Henry’s mind develops, Finn is starting to discover the fun of messing with it. He gets a kick out of Henry calling any & every vehicle “bus,” so yesterday he started pointing at various cars and saying absurd things like, “That’s a yellow bus, Goonie! That one’s a green teddy bear!” My boy. 🙂 –J.]