We had a ball (as usual) dropping in on our friends Matthias & Samantha at their newly expanded farm this past Saturday. Highlights included milking the new goat, meeting the bulls, riding on the four wheeler, and checking out “Henry’s” tractors (abandoned farm equipment that Hen now officially “owns” but thankfully can’t move back to our place!).

Check out this vid from the day, featuring the Rawhide performance from one of the boys’ favorite movies, Blues Brothers: 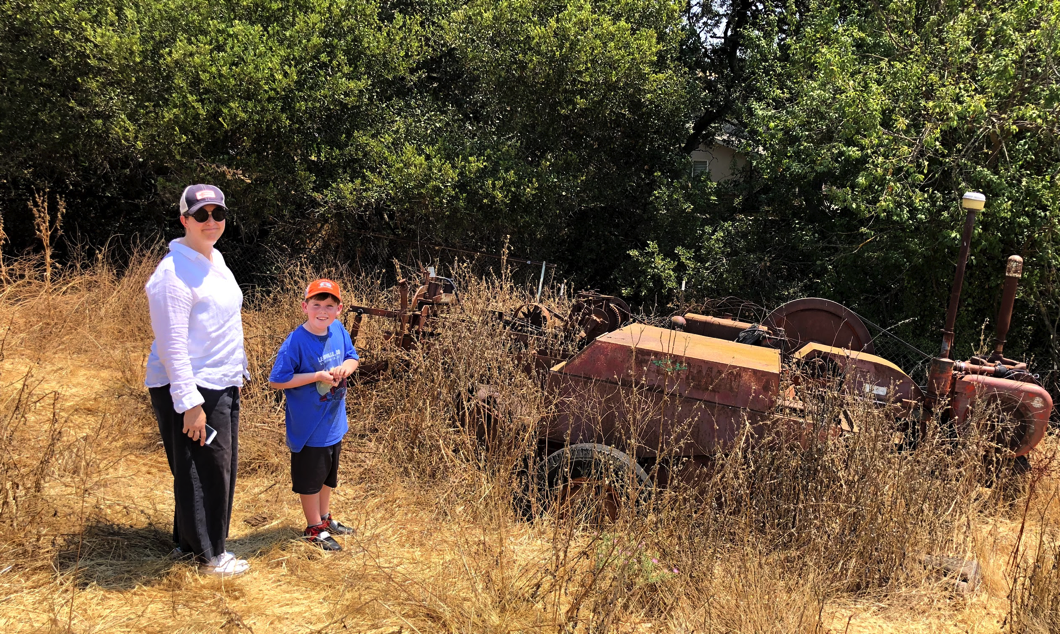 These days (evenings, specifically) G-Man is fond of asking that we grab our bikes, hit the streets, and head out for some quality trainspotting. His friend Damien, whose grandma’s backyard abuts the tracks, has suggested that she build a rooftop deck just so that Hen can come over & watch the iron horses go by. 😌 Last night we took my drone with us & were rewarded with a great moment!

From a bit earlier, here’s an unplanned abstract shot of Mini-Me & Me awaiting the train: 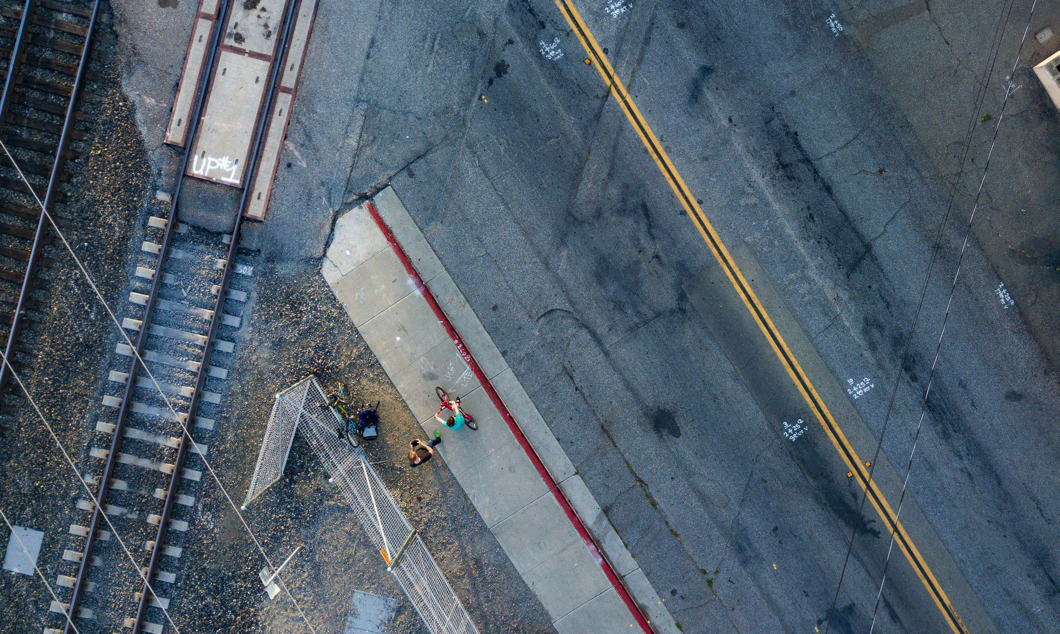 And ultimately we were rewarded with a wave from the Caltrain engineer:

Henry’s little sensors are running full blast these days to detect every bit of vintage ephemera, from bottle caps to old cars. Yesterday he took Finn & me on a bike journey to inspect a neighborhood find—a beautiful old 40’s Chevy. Now he’s all over me to buy it: “Dad, it’s only twenty grand!!” Heh—I can’t blame him for trying. For now the ride will live in his mind—and in this little gallery of pics. 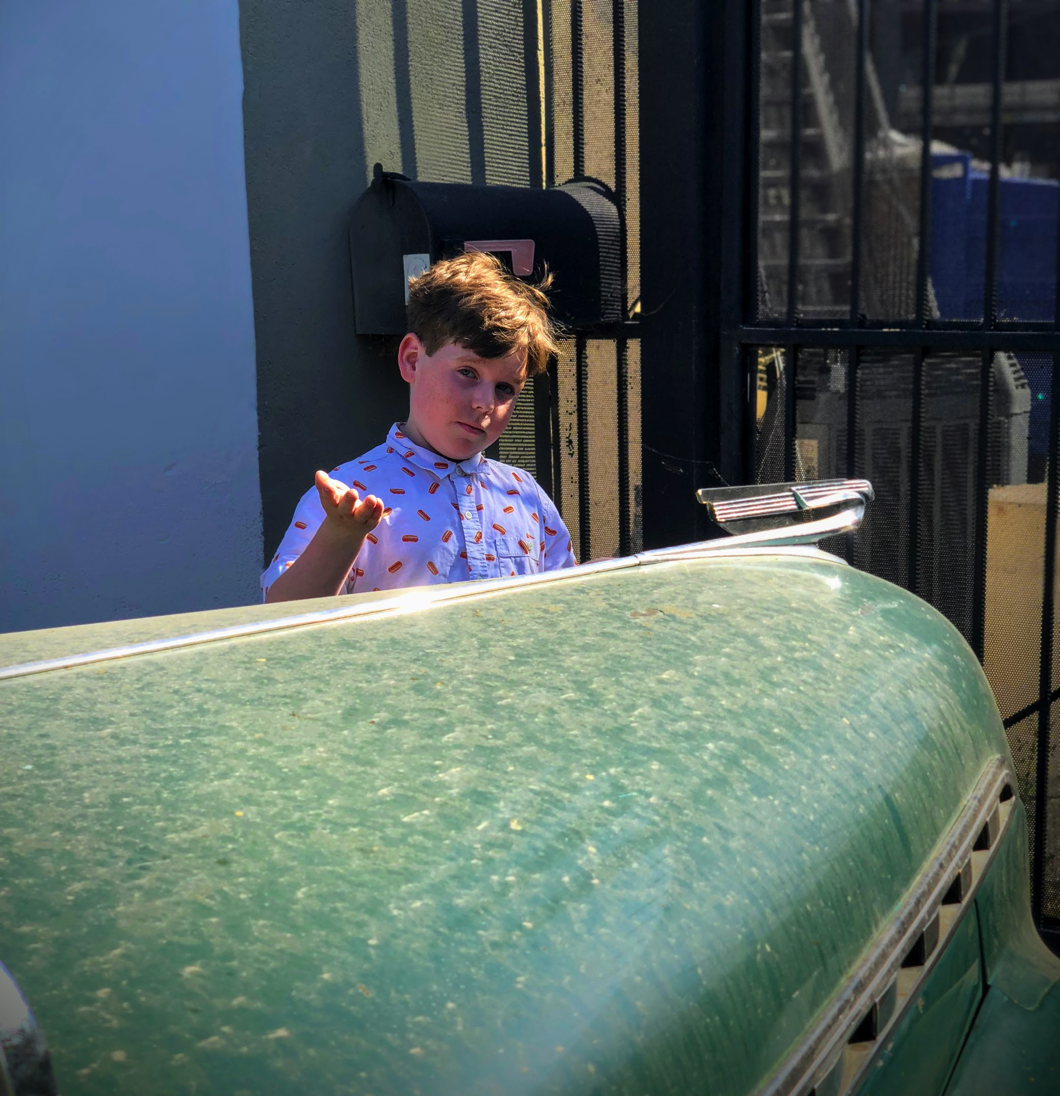 For our last full day in Leadville, the fam headed over to nearby Twin Lakes (near Twin Peaks) to take a boat tour that let us explore the historic Interlaken Hotel and surrounding area.

The highlight of the trip by far occurred during our return trip to shore. As we passed through the narrow channel between the lakes, a pair of hiking ladies & their large dog hailed our boat, looking for a quick lift to the other side. Little did we know that a 60-something German “naturalist” had shed his clothes & was swimming over to them. We got more than an eyeful as he popped out of the water to give the ladies a hearty “Gutenmorgen!” Thankfully he eventually covered himself with a rock & opted to duck back below the surface instead of coming aboard the boat. Too bad we didn’t ask him for a German word that means “The feeling of horrified delight that fills 9-to-13-year-old boys watching such a scene.” 😝

Here’s a little gallery (featuring only a half naked German) from the adventure. 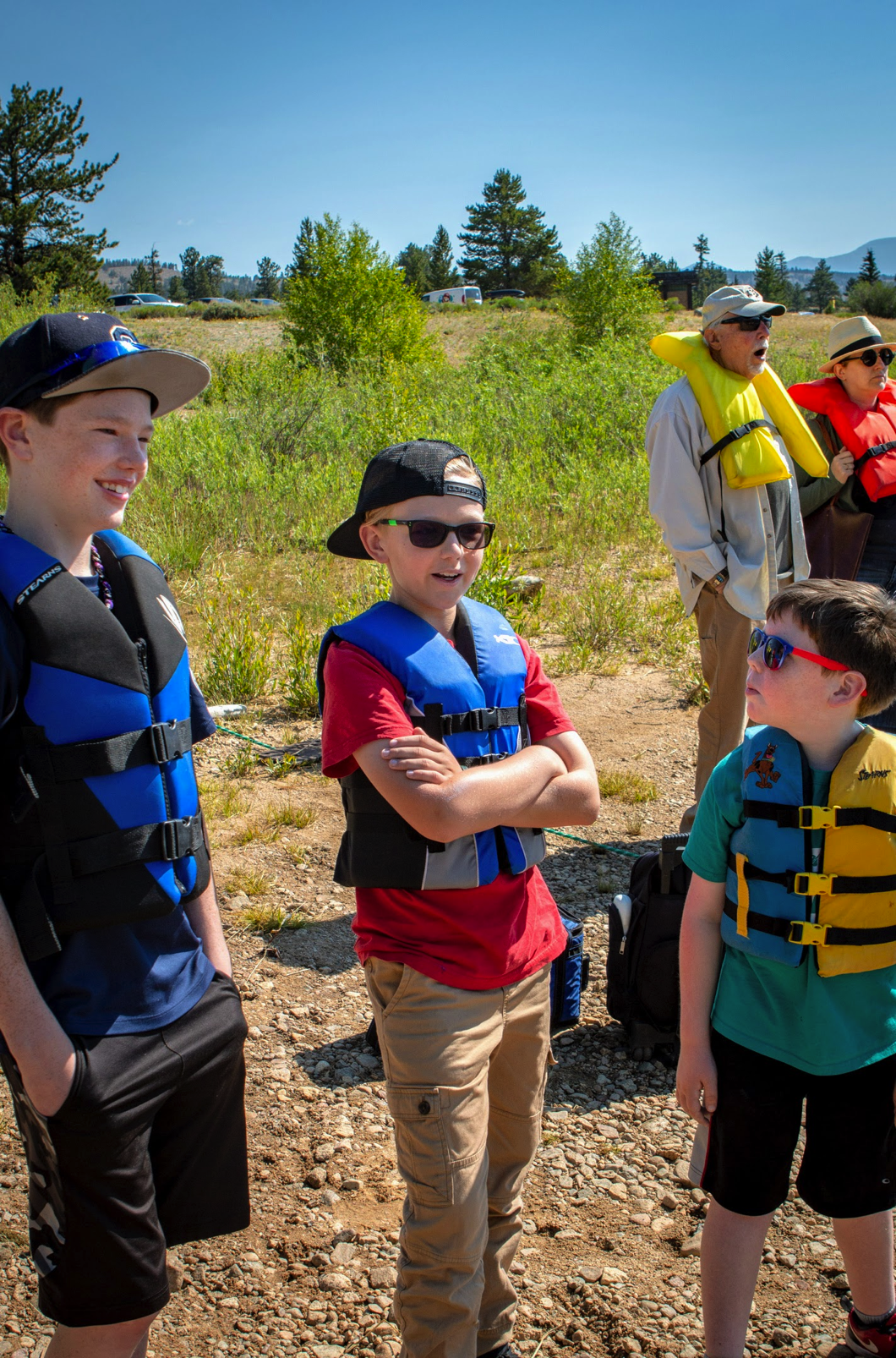 As we’ve done a couple of past years, on Sunday we made the pilgrimage to Bricks By The Bay, a ginormous gathering of fellow Lego nerds & their bonkers creations. The dudes were happy to score a few vintage bricks to take home—and Henry even found a set of tiny Lego currency! 🤑 Here’s a quick tour of some of what we saw. 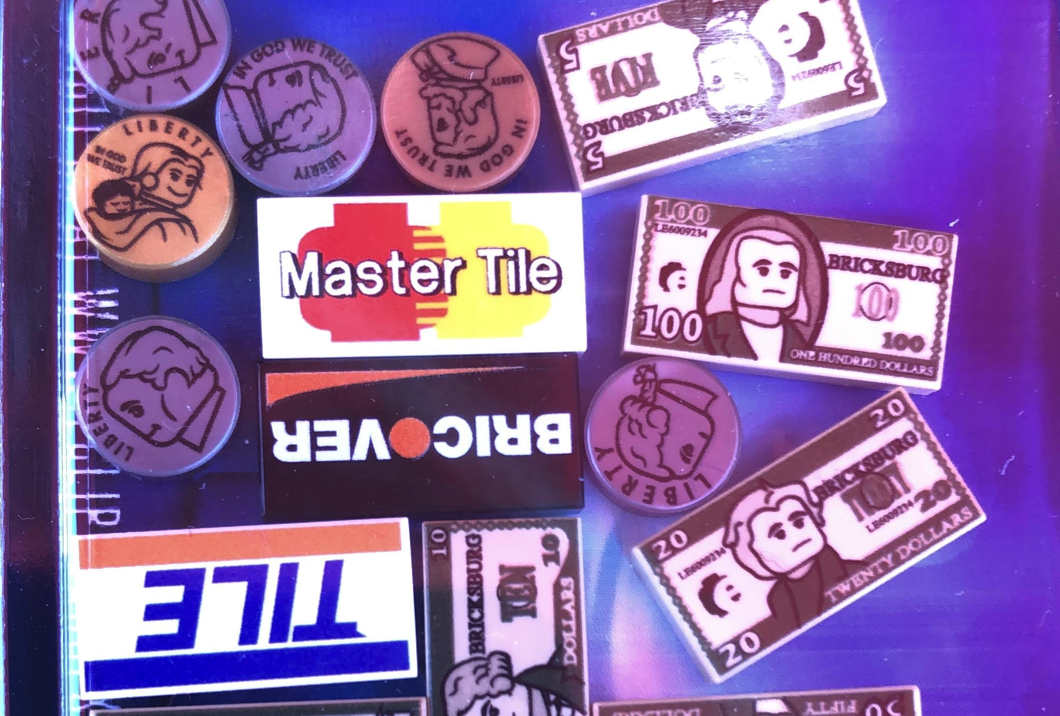 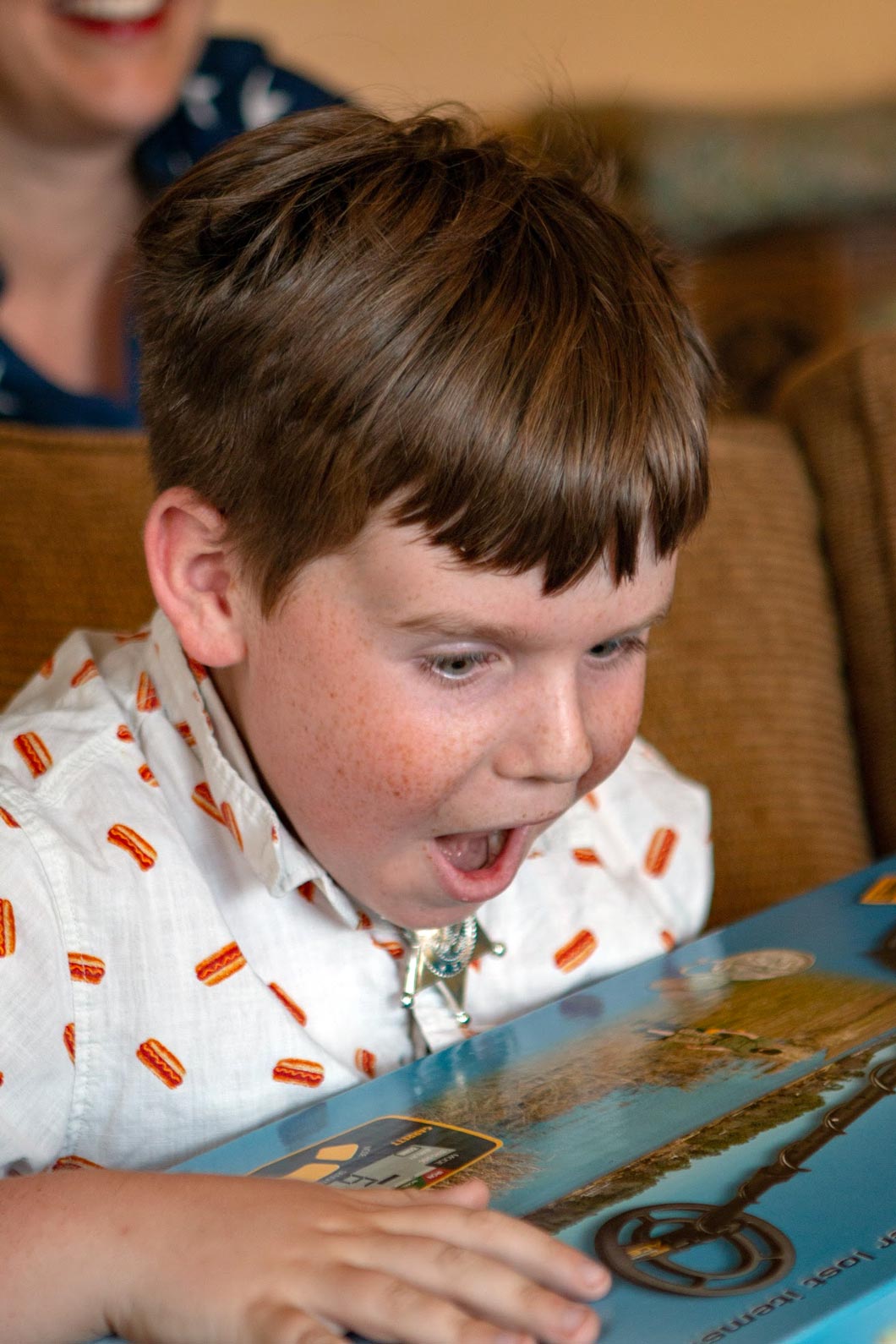 Greetings from 10,000ft.! As we’ve gotten to do in many past years, we checked in on America’s highest Fourth of July parade—this year complete with vintage fire trucks, marching lions, hailstorms of thrown candy, and more. Afterwards Henry went BERSERK over his new metal detector (more on that later!) and the whole fam journeyed to a nearby campground to picnic. Here’s a little gallery & some quick video highlights: 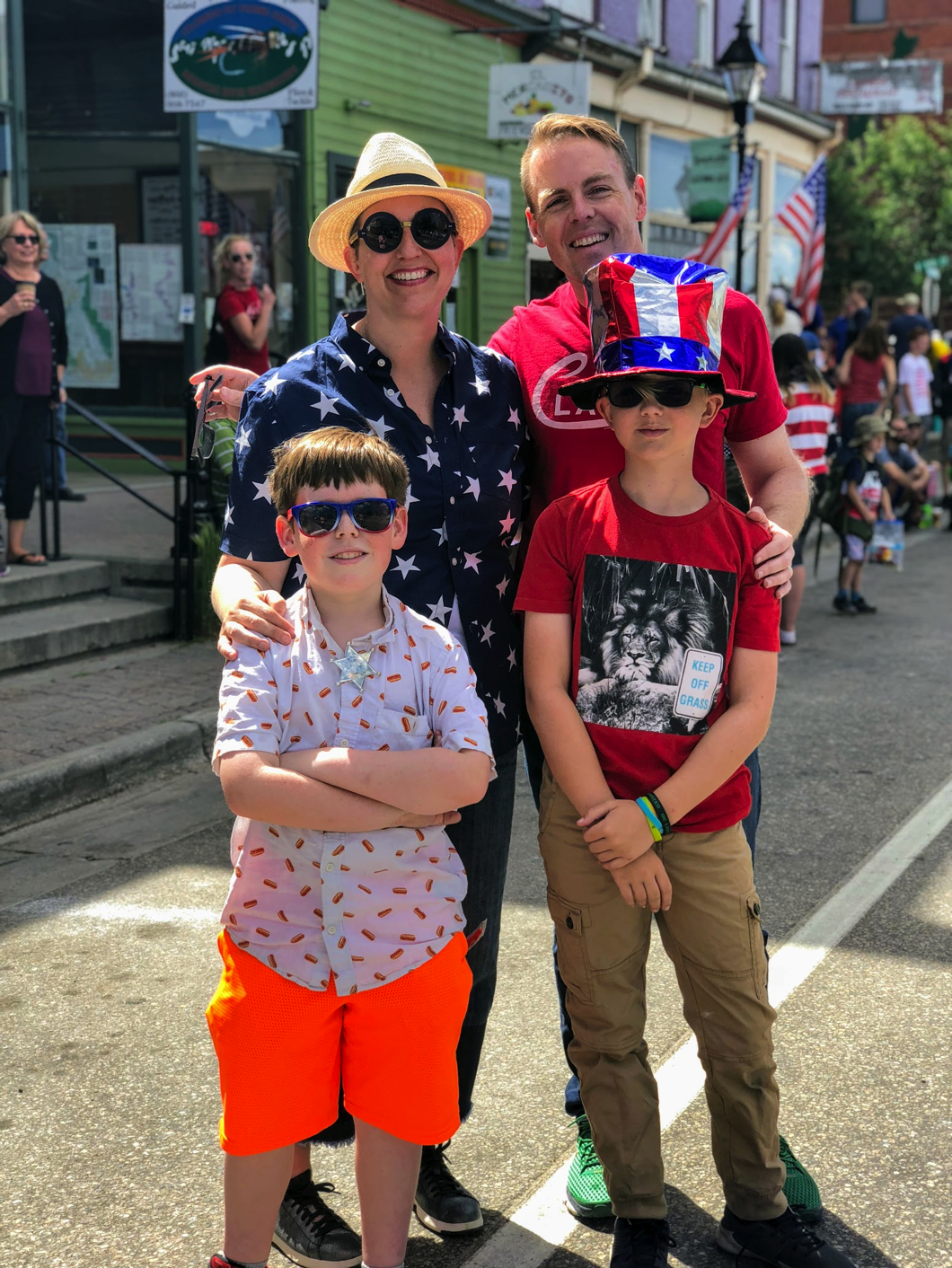 We’ve taken the boys on the Leadville & Colorado Southern scenic railroad a number of times since they were teeny. This year’s ride was more special than the rest. Grandpa Liggett treated each guy to a trip that included riding in the caboose and in the engine! Needless to say, Henry was beside himself with excitement, and Finn was pretty jazzed, too. The engine pushes the train up the mountains from behind, so the caboose is in the lead on the way up. The boys loved sitting high in the cupola and enjoyed the 360-degree scenic view from the top. The brakeman, Jason, let us ride on the outer deck of the caboose and take in the scenery from there. 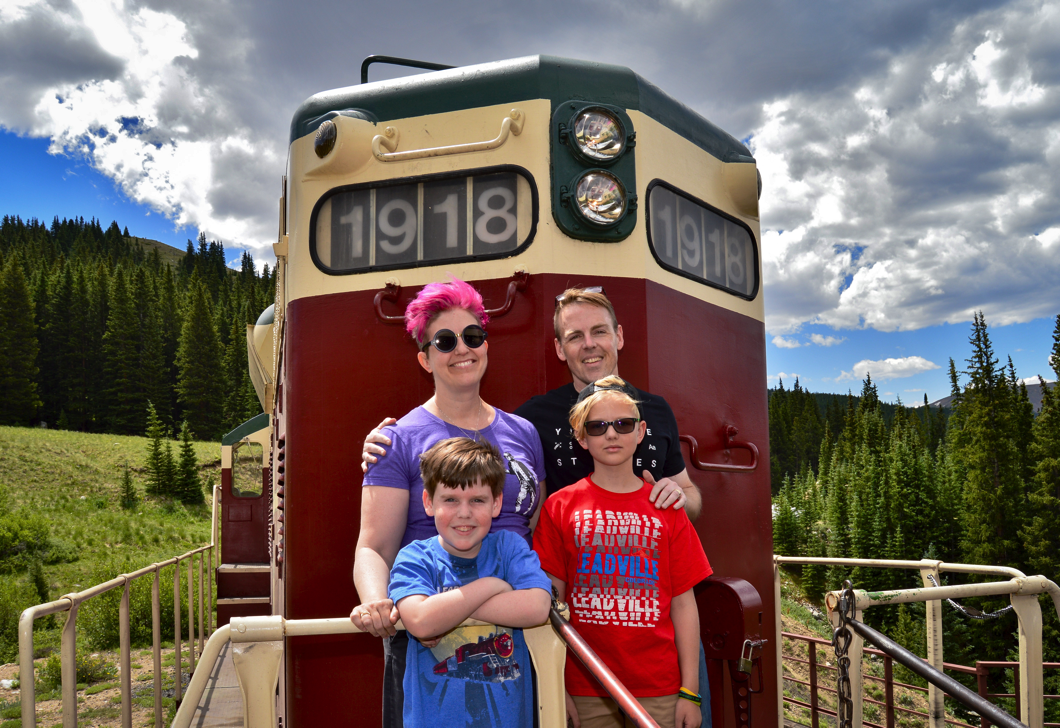 When the train made a brief stop at the top, Henry hopped off solo (against the advice of the brakeman) in hopes of finding a stray railroad spike. Just as Henry found one and put his foot back on the step of the caboose, the horn blew and the train started rolling again! On the way back down to the depot all four of us sat in the huge diesel engine and chatted extensively with the railroad owner & engineer, Derek, who’s been manning the controls since he was a teenager (supervised by his own dad back in the day). All in all the day was a blast, and one we hope will provide some happy core memories for both guys.

Here’s a gallery from the adventure, and you can watch the highlights below:

Being a nostalgic guy, I can’t resist posting a vid of the first time the lads rode the train, all the way back in 2011:

That’s the day they got to explore a whole fleet of motorcars with Patrick & Charlie; see gallery & video here: