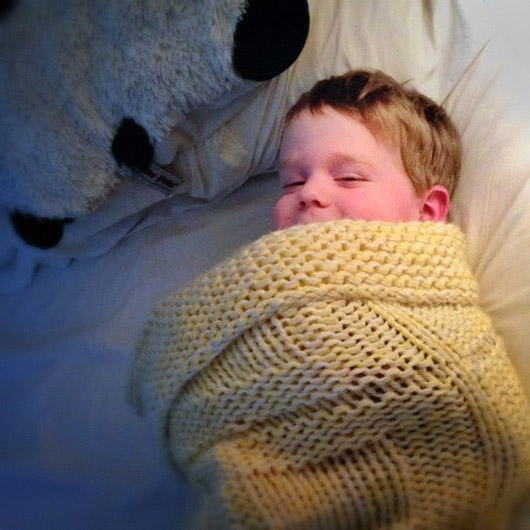 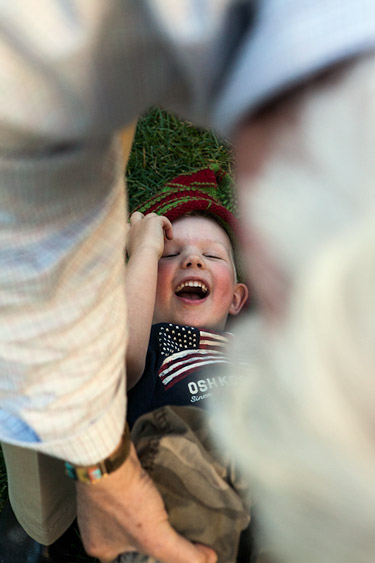 The Liggetts took off this morning after a nice weekend full of “sword” fights, tree-decorating, and Team TALB. Check it out.

Finnster & Mr. L. enjoyed some most unusual “bicycling” (and more) this morning. Check out their antics below. (It kinda reminds me of “Grandpa vs. Dr. Chaos,” aka the far chubbier 1-year-old Finn.)

My folks, aka “The Geeps” (a permutation of “GP”s for grandparents), are in town for a long Thanksgiving weekend visit. They’ve only been here a little over a day, and the boys are having a total ball with them. They’re sleeping on the “hideout bed” in the TV room, which Finny loves to prepare at the end of the day (inflating the air mattress is involved).

Grandpa and Dad-o took the boys to the park today – Finny showcasing his bike riding and Henry his Big Wheel riding. We also did a little craft project, making felt ornaments as we waited for the turkey to cook. And both my parents are excellent at reading stories, so the boys conscripted them into covering almost the entire Curious George canon, along with several other tales.

They rounded out today with pumpkin pie, some horseplay with Grandpa, and a two-man Dad-o and Grandpa version of TALB tonight, which involved a pilgrim, a lion, and a turkey. Let’s just say things didn’t look good for the turkey. Here’s a little gallery of events. 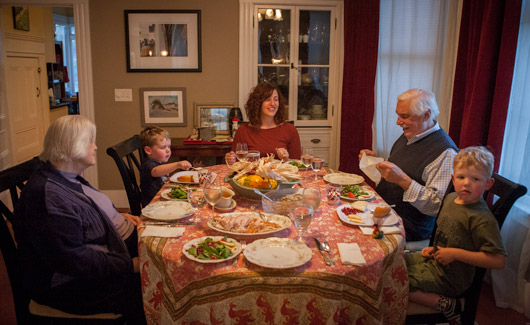 At long last Henry has surpassed the all-important 36-inch mark. Why all-important? Because that’s when a guy gets eligible for a whole lot of rides!

Hen had been patiently waiting for his chance to ride the fancy Pacific Fruit Express Family Roller Coaster at Happy Hollow. Despite being a bit peevish in general, he’s always done well with this kind of mayhem. For example, when he was two we took the boys on the Monster Kool Bus, and Henry wrapped up the ride by saying, “I crying, ‘Do it again!'”

For comparison/retro fun, here’s how Finny handled his first ride some 18 months earlier:

Henry ambles past an unintended (?) dribble-painting in Oakland last Saturday: 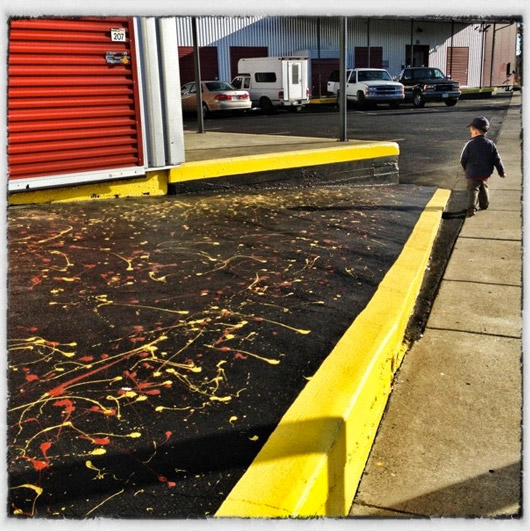 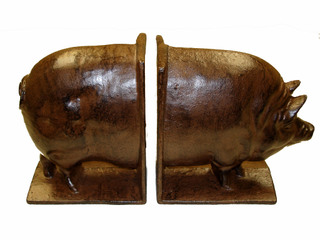 As I left my cab & ascended the stairs at 9pm tonight, I was shocked to see a little face peering out at me: 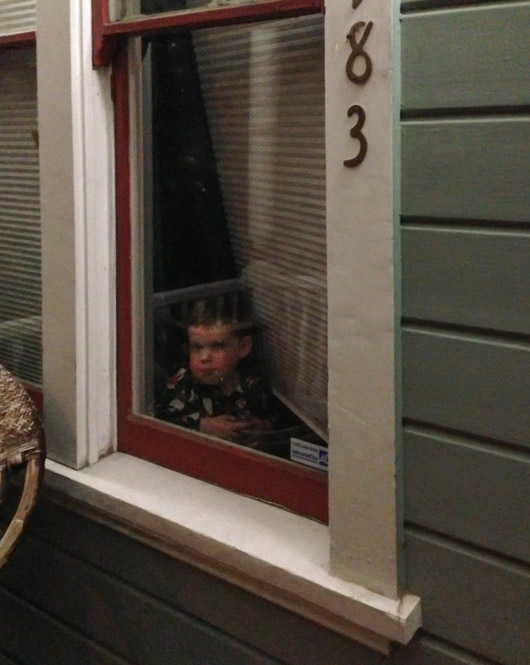 To my surprise, Henry didn’t come out to see me. I entered his room & found him behind the blinds, coolly maintaining his vigil. 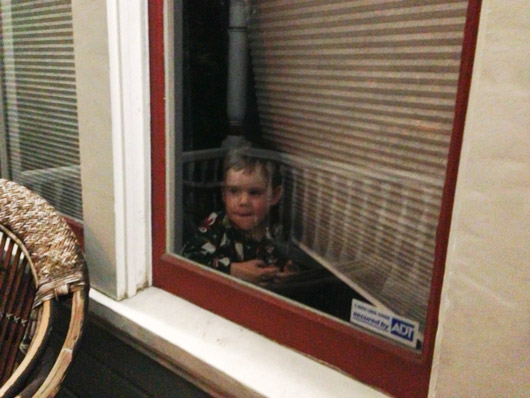 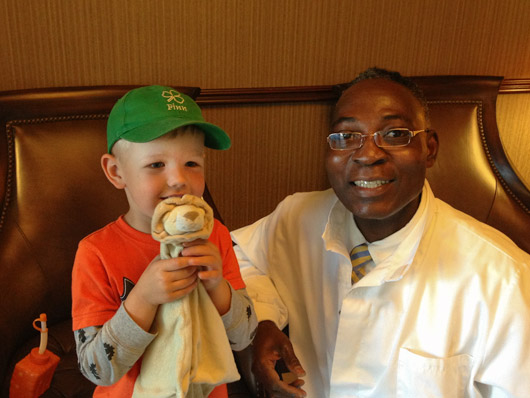 Never before has a kid been so excited about going to the dentist! For several days leading up to his appointment last week, Finny had been anxiously awaiting the trip to Dr. Vandi’s office. He loves seeing his buddy Charles, one of Dr. Vandi’s hygienists. And Charles loves visiting with Finny just as much!

Charles is originally from Ghana, and on Finny’s previous visit, he told Finny that lions (and other exotic animals) live in the wild there, just wandering around on the plains. Needless to say, Finny was beside himself. He told Charles all about his constant companion/blankie buddy Leo, and asked all kinds of questions about Ghana – which Charles was only too happy to answer. Charles was also very obliging and let Finny examine all the dental implements he’d be using that day – the little water jet, suction tube, and motorized tooth cleaner. He showed Finny how everything worked and let him press some of the buttons and pedals.

At the end of the last appointment, Charles promised he would either bring Ghanian currency or stamps to Finny’s next visit. And last Tuesday was the day! As promised, Charles was there bearing Ghanian stamps to show Finny, and once again let Finny examine the various tools around the dental chair. He even let Finny wear his special glasses with a little headlight! And Charles got to meet the infamous Leo. Here’s a little gallery of photos.

Nothing, it seems, brings out our boys’ inner hambone like a trip to Barber Tom’s (well, that plus the sugar rush from a fistful of suckers). I snapped this shot of Hen while getting my own ears lowered: 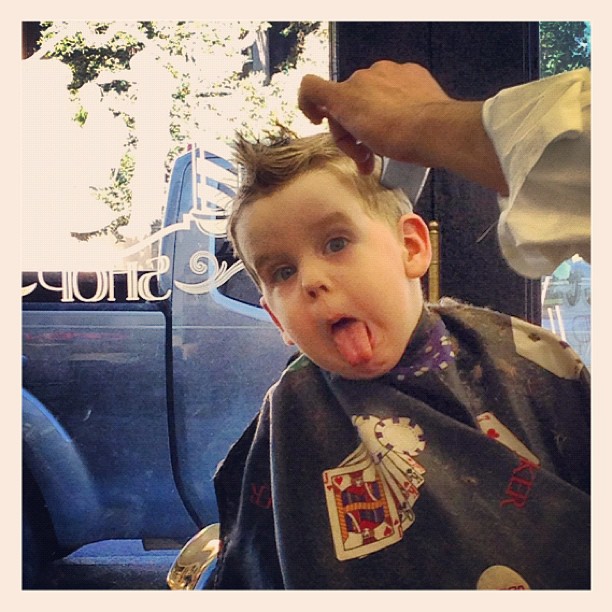 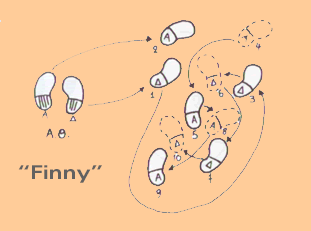 Happy Halloween from the Micronaxx! The boys loved sporting the excellent Thomas & Mummy costumes Mom-O created (with slight assists from Dad-O), both at preschool & while trick-or-treating. Young engineer Hen did become kind of a train wreck at school (kids touching his fragile costume, etc.), but both guys were sugar-fueled champs as I led them in neighborhood candy-gathering. (No set of stairs is too daunting to haul one’s train costume up, as long as there’s that sweet, sweet lucre at the top.) Here are some shots from the occasion, plus a video below. 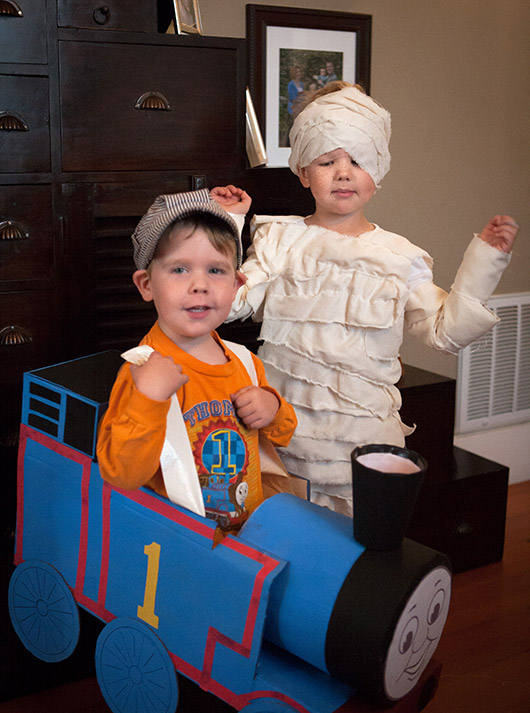