On Sunday the boys and I had a ball scrambling around a 70-year-old B-24 Liberator (a model of which my folks may remember hanging from our rafters for years) together with our little friend Anja. Either Americans were smaller years ago, or this plane was designed for operation by the 3-to-5 set. The boys enjoyed getting into turrets, and when hanging out in the clear nose turret with Anja, Henry insisted on closing the doors and saying “We need a little privacy!”

Following this thorough inspection, I got to fly in the old sucker with Anja’s dad Bruce! He was able to borrow some great video gear from work, even sticking little cameras on the chin & belly. Talk about crazy, open-air excitement! (Seriously, when I was looking out the tail turret, I saw a fellow passenger’s hat zoom past into infinity. “Hey, how’d we fly past a hat?” I initially wondered.) We haven’t yet edited the videos, but here’s a gallery from the adventure. Bruce jokingly complained, “I’m not sure these photos of you will turn out: you don’t look happy enough.” 🙂 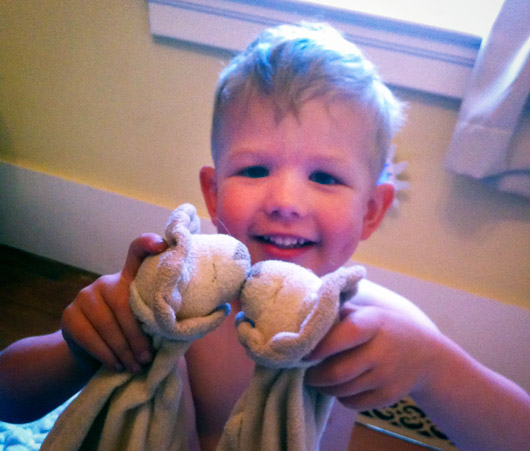 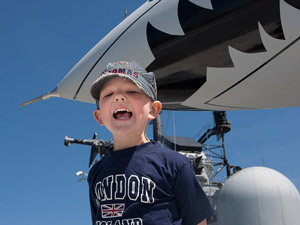 Man oh man were the Micronaxx ever eager to bring Mom-O her first breakfast in bed! Well, to be honest, they were excited to sample the fruits of our “secret mission” to nearby Flower Flour. (Finn kept gleefully threatening to “ruin the beans” by disclosing what we were up to.) In fact, both guys were excited to the point of being train wrecks, nervous that somehow Mom-O wouldn’t share, or (in Finn’s view) that I’d get sidetracked changing Henry before escorting them upstairs (“Don’t get into the poop stuff–it’s always a big deal, and he gets upset, and blah blah blah!”). Happily, a few bites of sugary goodness restored their pluck: 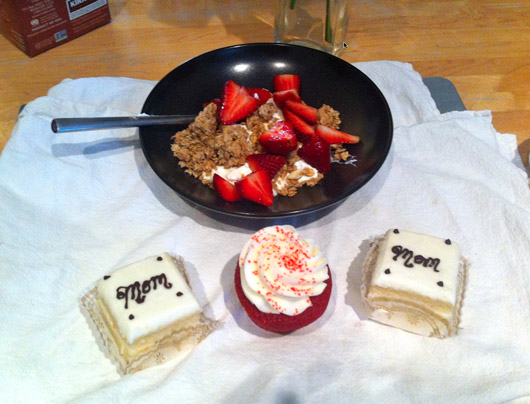 My only regret is that I couldn’t find a tube of brown frosting with which to change “Mom” to the much more fitting “Mom-O.” 🙂

Afterwards we all delighted in the boys’ first boating experience–something they found especially exciting given our recent nautical exploring (more on that shortly). 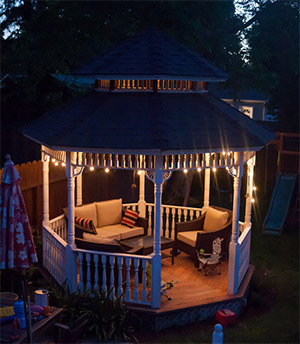 A brief anecdote from Grandma Nack:

When I was with the boys, I spelled their names, including their last name. Then I told them I had another name than Grandma, which was Pat. Finn looked at Henry and said, “Her last name is Grandma.” 🙂

Delmas Avenue, 7am: A beaming Finn just ran into the TV room where Margot and I were sitting. “Hey, I have four things to tell you dudes!” he announced.

“One is, ‘Jeez Louise, Fillmore’s eating cheese!’
One is, Stegosaurus eggasaurus.
One is, Rhino vyno.
And one is, Brontosaurus applesaurus!
I made those up while I was sleeping!” 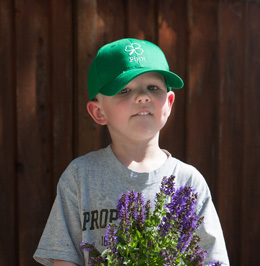 I loooove me some slang. But what do I love more than slang? The fact that our family generates our own slang on a nearly constant basis. John and I are both word lovers, and we’re also huge goofballs, which makes for a perfect combination when it comes to coming up with fun, unusual ways to describe otherwise dry, quotidien things. Here’s a fresh installment of slang from the Naxx, both micro and macro:

Poop rock: The fake rock in the yard where we hide a spare housekey. You can probably guess what the rock looks like.

Potty shot: Why simply “go potty” when you can take a potty shot? See also: “Sor-ry for potty rockin’” (with appropriate credit to the band LMFAO)

DPT: Short for “dipetorium,” which was our slang for diaper changing table. We still call the boys’ dressers DPTs, which is even better now that this is a completely obsolete term.

Monster style: Putting ones shoes purposefully on the wrong feet. I can’t even really remember why we call it “monster style” but the guys love it.

Beasts: Mom-O’s hair clips, which both guys love to wield as they chase Dad-O around, trying to “bite” his clothing.

Brusha: Toothbrushing.  Heard at 7:15pm most nights, “Ok guys, time for brusha!” [See also “Sugarbugs,” as in “We’ve gotta get those sugar bugs off your chompers.” –J.]

Rubba: Eye rubbing by a tired Micronack. Heard at 7:30pm most nights, “But I’m not doing rubba, Dad-o!”