Finn has been keenly interested in learning more about sewing, after having witnessed me make his Halloween costumes the past couple of years. I told him that a man who sews things for a living is a seamster, and he’s now decided that he wants to be a seamster! He’d been begging me for a sewing lesson for about a week now. Unfortunately, my old sewing machine (which I’ve had since I was 17) bit the dust the other day as I was finishing up Henry’s Christmas PJ’s, so I couldn’t give Finny the “sewing lesson” he’d been asking for.

Luckily, Amazon saved the day with a screaming deal on a basic sewing machine and 2-day shipping. So tonight after dinner, I broke out the new machine and Finny and I sat down to sew. Even little Henry was interested and came over to watch, too. I showed them how to wind the bobbin, thread the machine, and pick different types of stitches. I showed them how the foot pedal works, how to pin fabric together and then how to sew. I made a little bag out of scrap fabric to show them how it all comes together, and they were super excited to see the finished result.

Then it was time to really deliver – after letting Finny wind the bobbin, I quickly stitched up a couple of little “disguises” for the boys’ new teddy bears out of felt scraps left over from Halloween. Of course, Finn’s got a lion disguise, and Henry’s got an owl disguise. Here’s little gallery of the evening’s proceedings. 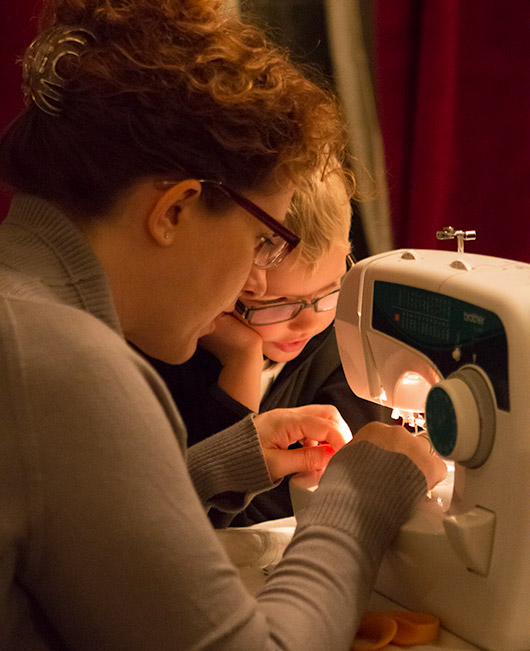