Sometimes a guy just has to be a good bad uncle. 🙂

For years we’ve driven past a large collection of rusting, abandoned mining equipment, along with a bunch of huge rocks that get used in each year’s Boom Days drilling competition. We’d never stopped to explore them, though—until now. On Thursday nephew Patrick joined the Micronaxx & me on a little excursion. Because the gate was locked & marked “Private Road!,” we parked nearby, then swung the “minor miners” across a little stream & scrambled up a 20-foot slope made of loose rock. “Brea-kin’ the law, brea-kin’ the law!!”

At this point if you’d imagine I was thinking of Will Ferrell’s hilarious bit about George W. Bush exploring an abandoned mine shaft, you’d be right. 🙂 Happily we avoided all manner of scrapes, tetanus, lockjaw, cave-ins, lightning strikes, and more. (Seriously, it wasn’t dangerous, or I’d never have taken the guys there; it just seemed a bit rakish & daring.) The four of us hoofed it to avoid some impending rain, and the next day we returned with Mom-O. Here’s a gallery that combines shots from both visits. 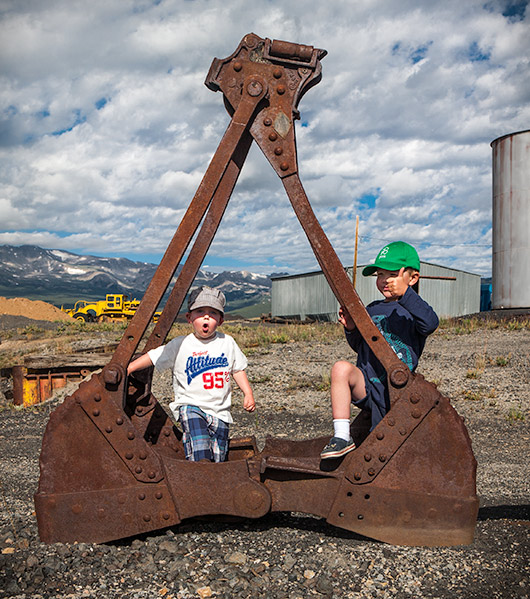 One reply on “Squires in the Hole”

Oh wow. That is SO cool. What a great find!