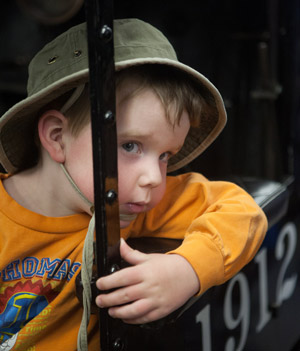 This past Sunday, the four of us headed out to Santa Cruz to experience something called “Al Smith Day” at the Swanton Pacific Ranch. Our acquaintance from the San Jose History Park, Motorman Erik, hipped us to this special event. Once a year, the Swanton Pacific Railroad, which runs through the ranch (both owned by Cal Poly University), is opened to the public for train rides, tours, live music, and BBQ. As soon as Erik told us about it, we knew we couldn’t pass it up. (Turns out Al Smith is the Cal Poly alum who gave the ranch to the school & created the railroad.)

The train & tracks are small-scale, like what you’d expect in a mine. They have both steam and diesel engines at work, and have built a really cute little yellow train station where you board. Cal Poly’s got a very active group of train enthusiasts who refurbish engines, and maintain the cars, roundhouse, and sheds. These guys range in age from 13 to late 80’s. They were all happy to talk our ears off about the various engines, track machinery, and assorted gear. Needless to say, the boys were fascinated. We spent lots of time in the round house checking things out (including a tiny ore car!) before heading out on the actual train ride.

Finn and Henry had a blast playing “conductor” and “snack man” in our little enclosed car during the ride. After the ride, we watched some guys from the Cal Poly logging program chop wood with various sharp implements. We also toured some parked full-scale cabooses, listened to the live bluegrass music, and enjoyed our BBQ in the beautiful sunshine. It was a great day, and we were thrilled to get in on the secret! Here’s a little gallery of our train-tastic adventure.