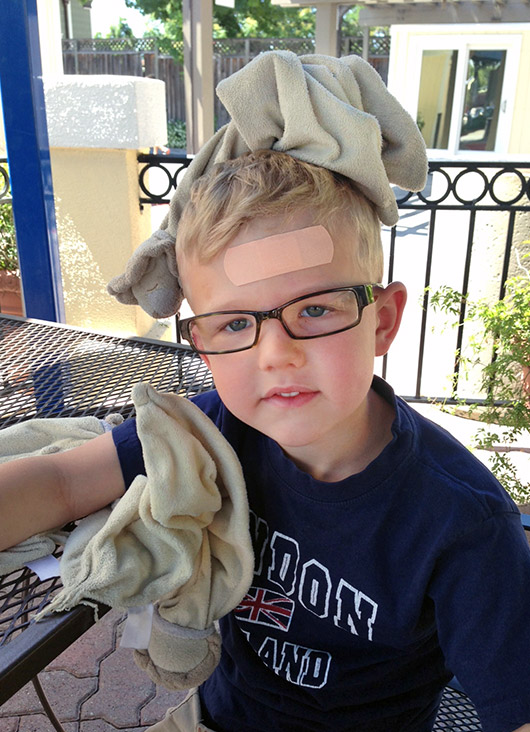 Yesterday morning certainly started off with a bang…and by that I mean Finny slamming his head into the edge of the car door as we were leaving for school. I had opened the car doors so all the boys had to do was come down the back steps, walk into the car, and buckle themselves in. Finny came bounding down the stairs, and ran for the car – not realizing the open door was pointed right at him. He ran straight into the edge of the door and then crumpled to the ground shrieking and gushing blood.

I was standing on the other side of the car when it happened, ran over to him, and picked him up. He was holding his forehead and his face was covered in blood. I shouted at John to grab some towels, and mopped Finny off enough to see the big, deep cut on his forehead. We jumped into action – all piling in the car with me pressing a giant wad of paper towels onto Finny’s head. John got behind the wheel and drove us to the urgent care clinic just down the street (thank God!), while I tried to calm my panicked, crying, hyperventilating child (while his poor little brother looked on…). He dropped us off and we made our way into the clinic. John then proceeded to take Henry to school so he wouldn’t have to witness all the chaos.

The crying and moaning and shrieking continued as I tried to fill out the required paperwork at the clinic. Thank God for the mom who was waiting there with her sick 6 year-old son. She came over and continued to press the towels to Finny’s head while I filled out the seemingly endless paperwork on the clipboard. She took the clipboard back, and we were soon ushered into the exam room. I managed to keep Finny calm by just talking and talking and talking to him about whatever I could think of. As long as I was talking, he was ok. I explained everything the nurse and doctors were doing while he got his vitals taken and they examined the cut. Luckily, it was just shallow enough to avoid stitches (Finny worriedly asking “Will they put my head under a sewing machine?!”).

John reappeared with the Leomarans just as the doctor was about to patch Finny up. Finny squeezed them (and Dad-o’s hand) tight while the doctor cleaned up the wound, squeezed the edges together, and put Dermabond (superglue for skin!) on it. Within a couple minutes, the glue was dry, he had a fresh bandaid on his head, and we were ready to go. The little boy and his mom who helped us out in the waiting room peeked in to see how Finny was doing, and I gave the mom a GIANT hug, thanking her for her help.

We went home and I kept an eye on my boy just to make sure he didn’t show any signs of a concussion. We watched a movie and went to the grocery store and car wash, and I kept wondering why we were getting all these strange, empathetic looks from people around us. I mean, Finny just had a bandaid on, it’s not like his entire head was wrapped in gauze! It was only as we were standing in line at the grocery checkout that I realized we both still had our bloody clothes on! No wonder we were getting weird looks!

After a long afternoon nap, Finny seemed to be feeling much better, despite the big knot on his head. I think the only thing that’s really damaged is his vanity…he was very emphatic that he did not want to go back to school because he didn’t want Magdalena to see him with the bandaid on his head! And he didn’t want to go out for sushi and have the sushi ladies asking about what happened, either. I told him he could disguise it with a hat, and he’d be fine. We did go out for sushi, and he’ll be seeing Magdalena and his other amigos at school tomorrow.

Oh, I’ve been there before. Those head wounds, the bleeding, the trip to the ER and a distraught little guy.

I’m so glad to hear you’ve both weathered the storm. High five to moms everywhere.

I had to get angry when ( again and again ) I read this;

So, we can pay for dinner in an instant – AFTER we consume a meal.

Why do we have to run through like 40 pages of paper work to admit a bleeding child.

I am sorry your son was hurt, but this is madness.

Awesome teamwork Mom-O and Dad-O! I’m pretty sure Margot could calmly talk anyone through anything. Well done!