Yesterday marked the exciting first day of Little League season. We signed the boys up for T-ball this spring, to give them an opportunity to try something new, learn how to play a team sport, and do a lot of running around. Since neither guy has ever played ball before, we are starting with T-ball so they can learn the fundamentals without any pressure. They’ve been really excited about going to practice with their fellow Mets (inexplicably represented by the letter “B” and a cartoon bumblebee).

Prior to yesterday’s opening ceremony and first game, shown in this gallery, they’ve been learning base running, “base position”, catching, batting, and throwing. They’re both catching on pretty fast, and they are really enjoying themselves. Henry is actually pretty fast on his feet when he’s focused enough to remember to run! And Finn has a pretty good arm!

They had a blast yesterday, playing their first game against the Dragons, and are looking forward to Saturday match-ups with the Scrappers, Tin Caps, and Sea Dogs. We had an equally great time cheering on all the players and watching the constant tangle of outfielders, all trying to get the ball and throw it back to first base. 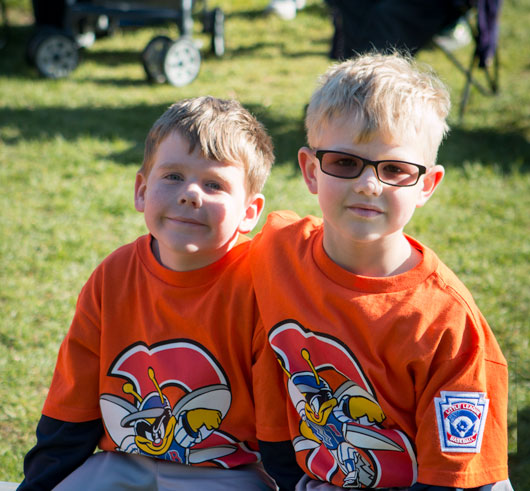