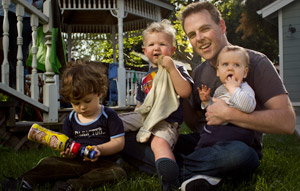 This past weekend our Argentinian friends Adolfo, Romina, and their son Bruno rolled into SJ for a visit. When we last saw them in Vegas last spring, Brunito was only about 7 months old. Now he’s a big, mobile, curly-topped 18-month old, and I think he had a pretty good time “kickandalo” with our guys.

Adolfo took some great pics (HTML) of all the guys (Dad-O included!) goofing around in the backyard and at “Traintrackpark.” At one point, Finny was clearly enjoying his chocolate milk, and then later Bruno was really digging the bottle, which was dubbed “Coca!”

You can bet “Coca!” will be new the new rebellious outcry in the next anti-globalization meetings… 🙂