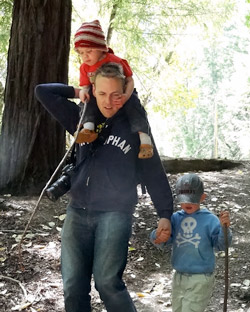 We survived! Our guys are officially seasoned campers, chomping at the bit to go again.

Margot & I brought the boys over to Big Basin the Friday before last, rendezvousing with another 15 (!) or so other kids & their parents. Because she had Pilates training on Saturday & Sunday, Margot didn’t sleep over with us, but she did a brilliant job packing & helped us set up the tent. Without her I’d still be out in the woods—if I even got there to begin with!

We borrowed camping gear from my friend Dani at work, but it didn’t occur to us to get air mattresses until we saw all the other families pumping up theirs. The first night was more than a bit bumpy, literally & figuratively. (Note to other parents: When introducing kids to camping, maybe don’t pick the longest day of the year!) The guys bounced around the tent for hours like a couple of popcorn kernels. I was the old maid.

The next day, however, our friend Shay showed up with some good news: “I’m the camping fairy!” she announced, then went to get something from her car. Finn turned to me: “Is she really a camping fairy?” No, she claimed: she was just a “mattress mule,” having been recruited by Margot late the night before to carry a brand new set of air mattresses to us!  As I had no phone coverage at the camp site, this was a terrific surprise!

Can I claim we then slept like kings? Well, not exactly. Ensconced in our tent, I thought of the Passover scene from The Ten Commandments: I kept hearing periodic wailing arising from other tents & just thought, “I don’t know who that is, and I don’t know what’s happening, but man we’re just staying behind our door and riding this thing out!” In any case, our backs sure appreciated the “close air support.”

Oh, by the way, parents: When it comes to kids in sleeping bags, it seems there’s about a three-inch window that separates “cozy” from (on one end) “hypothermia” and (on the other) “asphyxiation.” I kept waking up to find Henry totally exposed & turning blue, and then (having remedied that problem) completely missing, having slipped entirely into the bag. Yeesh!

Here’s a gallery of the goings-on. Other random bits from the adventure:

One reply on “Big Basins, Camp Fairies, and Banana Slugs–Oh My!”