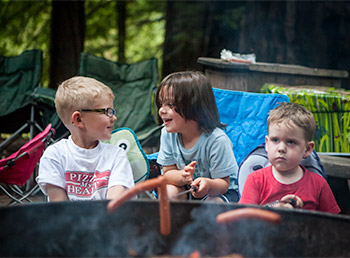 This year marks the second year we’ve taken the Micronaxx camping at Big Basin with a bunch of our Las Madres friends and their kids. Last year John was flying solo with the boys because I had a weekend workshop. So, this year was my first time going! We had a blast! We were the first ones to arrive at the camp site on Friday afternoon, so we had our pick of places to pitch our tent. The boys always get really excited about setting up and then testing out the tent and air mattresses, and then proceed to running around and exploring the campground.

There were tons of things for everyone to do, thanks to many of the crafty and camp-expert moms who helped plan the trip. We checked out a tipi made of large branches at the edge of the campground. And of course, we had s’mores after roasting hot dogs for dinner on Friday night. Then the kids ran around in the dark with their headlamps on – which looked like a giant swarm of fireflies.

On Saturday morning, the kids got to paint some bandannas and water bottle holders, which they then took on a short hike to the little waterfall down the trail. We also looked for, and found, banana slugs, which are now known as “bonobos” based on a TALB that was borne out of last year’s sighting.

Here’s a little gallery of all the proceedings.